Unbeatable Squirrel Girl 23 ends with Doreen in the clutches of a robotic Tyrannosaurus Rex, but the most important plot points involve discussion. It’s not quite My Dinner with Andre. We also get an explanation of the problem in the Savage Lands, a couple of montages, and the aforementioned robot T-Rex. Even so, the most important moments happen as Nancy talks it out with Stefan and then talks out that conversation with Doreen. Ryan North and Erica Henderson elevate these conversations by applying real caring between the characters and creating visual interest during these conversations.

During the “maybe kinda date” with Nancy and Stefan, they debate fascism in the most respectful way. They both recognize good in the other person and want to understand. It’s a refreshing moment of near wish-fulfillment to see two characters with opposing sociopolitical views able to have such an honest and non-confrontational dialogue. While the point of view of the story obviously gives more credence to Nancy’s viewpoint, North avoids making Stefan a bad guy or even a dope. He was raised to believe what his government told him to be true. It’s hard to blame him for relying on those principles to build his belief system.

He is even given room to make his argument for super-man as superior leader. It’s not an argument that Nancy accepts, but the conversation never devolves into anything less than a civil conversation between two people who genuinely like each other. They both know that Doom stands between them as demonstrated in their parallel thought bubbles.

After the date, Nancy is still confused about how to balance her feelings with their political incompatibility. What follows is a two-page spread that traces her conversation with Doreen as well as their path to some late night programming. Here, North and Henderson have created a realistic conversation with a flow that mirrors the winding route. 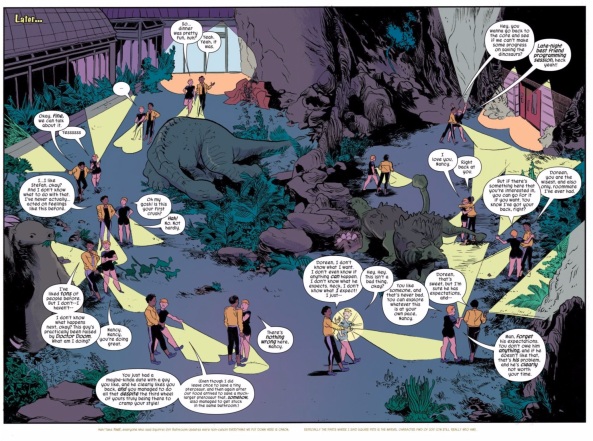 The beams of the flashlight guide you along, as Nancy opens up more and more to her best friend. The different figures of the women taking up the same plane also reinforces that they are shifting from line to line. Doreen is adjusting her role as BFF cheerleader to comfort while Nancy works through her fears about this potential relationship.

North and Henderson presented a debate about the merits of fascism and late night girl talk in a compelling and kind way. There are no bad guys here. Well, maybe that robot T-Rex. We’ll see.