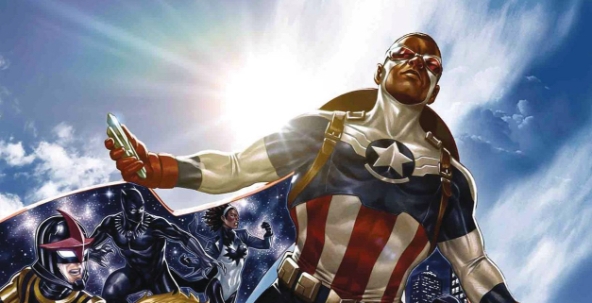 Spencer: I’m writing this piece in the aftermath of one of the more horrific weekends in recent memory (Charlottesville), which arrives at the tail-end of one of the most horrific ten months or so of my lifetime. I don’t exactly feel an overabundance of hope right now, a sentiment shared by those trapped in Trump’s America and in the Hydra-Controlled America of the Marvel Universe alike. In Secret Empire 8, Nick Spencer, Daniel Acuna, Rod Reis, Sean Izaaske and Java Tartaglia finally bring the light of hope to their story, but I don’t know how well their methods translate to real life.

The very first page — another of the Reis-illustrated “fairy tale” segments — actually foreshadows everything that follows, and not just thematically.

Not only does the narration sum up this issue’s plot in only 31 words, but Steve’s return from the depths of the sea foreshadows Sam returning from his near-watery grave at the issue’s climax. That’s the second time Sam rallies the troops this issue, and I think what intrigues me the most about this installment is trying to figure out why that first attempt fails, while the second succeeds.

Sam’s first effort finds him attempting to use his “barfed-up” Cosmic Cube shard to boost the power of his allies as they make one final attempt to breach the Darkforce Sphere and Planetary Defense Shield. They seem destined to succeed, especially since Sam’s speech addresses many of the criticisms both Spencer and Steve Rogers have lobbed at Marvel’s heroes throughout this event. 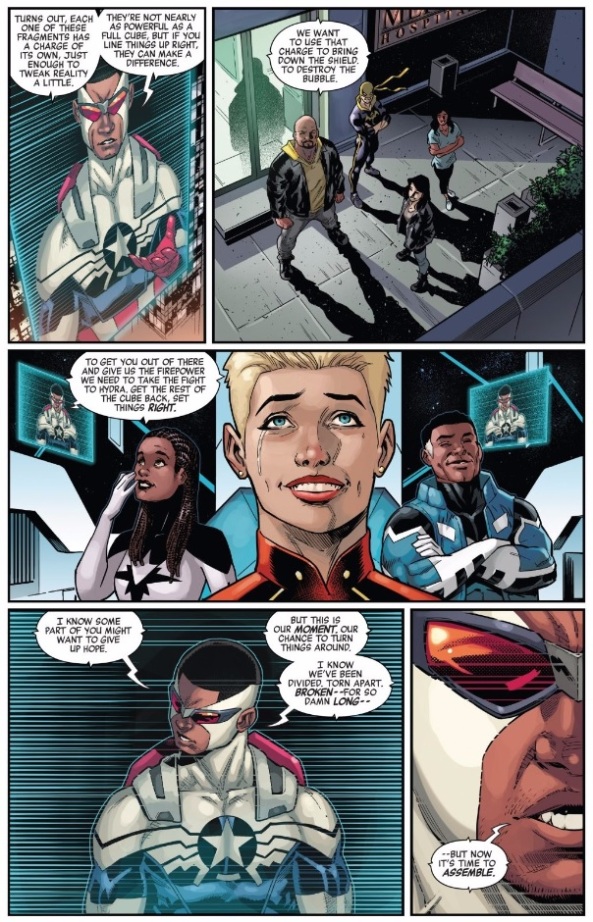 Throughout this event, it’s been easy to read the Marvel heroes, recently shattered by Civil War II, as stand-ins for the Democratic Party, or even just for liberals in general — as too consumed by petty in-fighting to deal with the insidious threats of fascism and white supremacy waltzing into positions of power. It’s a valid criticism, but Sam’s solution — to simply shut up and “assemble,” or start working together again — seems a bit too pat to work in real life. Maybe that’s why their efforts ultimately fail, yet I don’t know how well that reading stands up. Pat or not, both groups of heroes put everything aside and make great sacrifices (The Sanctum Sanctorum, Alpha Flight’s satellite) in order to fire one last salvo — and it simply doesn’t work. It’s a great dramatic beat, but seems to undermine Spencer’s message a bit.

I thought that perhaps this was punishment for Sam’s leaning on the powers of the Cosmic Cube shard to save the day, but on further consideration I don’t think this holds up — the shard is just a beacon of hope, and Sam and his allies respond to that hope with real action, cooperation, and hard work, as any group should. Furthermore, it seems to be the power of the shard that revives Sam, allowing his second salvo to succeed at all.

So let’s investigate the figures who score the final victories. It’s Maria Hill who assassinates Blackout, bringing down the Darkforce Bubble, and Quasar who finally shatters the Planetary Defense Shield after (conveniently) waking up from her coma. Both these characters have held large roles throughout Spencer’s runs on both Captain America books, making their prominent roles more fitting than many of the other characters appearing in Secret Empire. Moreover, Steve Rogers went to great lengths to take both women out of the picture — there’s some delicious irony in their reappearing just in time to deal a decisive blow to his plans.

But again, I’m having trouble translating this into any sort of real-world correlation. There’s a bit to be found, though, in the source that led Maria Hill to Blackout.

Deadpool is far from innocent, but he was essentially duped into working for Steve Rogers — now he’s turned this situation to the resistance’s advantage by providing them vital intel. Are we supposed to see Wade as one of the Trump voters with “buyer’s remorse?” Kobik’s cliffhanger reappearance has a similar effect — she was groomed and misled by the Red Skull, and now seems pretty distraught about it. Again, though, what are we supposed to do with this connection? I’m uncomfortable with the idea of spotlighting these “reformed” voters — I applaud anyone who can admit they’re wrong, but they don’t deserve all the attention, to be in the forefront of a movement over those who have fought to keep it alive from the start.

Of course, this is assuming we’re supposed to be finding any real life connections in this story at all; Spencer did initially plan this event before Trump was even elected, after all. Here at Retcon Punch we’ve found some powerful parallels to the ways dictatorships work and how to fight them in Secret Empire, but I’ve also found moments that seem designed to be evocative of current events, yet provide no real commentary on them; the latter isn’t necessarily bad, but in the current political climate it feels a bit toothless. This issue succeeds as a fun adventure yarn, but I wish it felt like it had something more useful or insightful to say about its topic.

How about you, Ryan? Are you finding commentary in here I may have missed? Does it even matter? What’s your take on the hope our heroes find in this issue?

Ryan M: The hope at the end of the issue feels like the moments of hope we’ve had several times in this series. It’s nice for now, but we are one or two turns of the plot away from it seeming like Hydra will win the day. Each instance of narration speaking of how people will never forget this moment, rings more hollow than the last.

The narration in this issue is mythologizing the events of the issue and tends to overcrowd the moments that could have emotional impact. We don’t need narration to tell us that hope is lost when Sam is shot through the heart. We don’t need to be told that heroes fight evil as Captain Marvel rushes to destroy the Centauri eggs. As Misty watches Sam fall from the sky, it’s almost intrusive to have the moment explained.

We’ve seen Misty and Sam’s relationship. We know that he represents the hope for the world and the fight against fascists. His fall out of the sky, especially as the story seemed to be building toward some kind of victory for the good guys, is painful enough. The reader knows what this means. Further, the narrator know what this doesn’t mean. Sam isn’t dead. Hope isn’t actually lost. The narrator reinforcing that “our prayers went unanswered” is disingenuous given the rest of the issue. The narrator know more than us. The narrator has the space and time to see the shape of the story.

It’s hard to see the story value in the narration as it plays out in the issue. In the series, each time the narration talks about “last stands” or the “day that hope died” or “when we learned” it becomes more and more unreliable. In some ways the narration feels like the voiceover in a Greatest Generation documentary, clouding the story by lionizing the events. This story is worthy without being told its themes over and over.

The events of the weekend hang like a cloud over any reading of this issue right now. We don’t have a narrator to tell us that there is hope to be found and where the turning points are in the fight against evil. Maybe that’s why I am being so hard on the narration in this issue. Hopefully in a decade, this story will feel more powerful and less reflexive. Right now, there is no hope for the reader to be found in the various plot points that get us to the end of the issue.

As Spencer mentioned, Quasar just happens to wake up from a coma twice as powerful as when she was injured. The timing is convenient and maybe we are supposed to believe that this is the cube fragment working in mysterious ways. By that logic, we can also dismiss the timing of the Blackout assassination. Had Sam held his mission for an hour, would Maria have been able to carry out her mission? Even the appearance of Rocket and his mega-bomb feels too easy. If the narrative is offering each of these coincidences as an example of the power of cube, the result weakens the story.

Or maybe, the current political situation asks more of the story than is fair. Hydra is not the Trump administration. Inhuman camps are not Immigration reform. Liberals in their urban “bubbles” are not actually under the Darkforce. Most importantly, our leaders are not superheroes. There is no cosmic cube. The narrator is right about one thing. In the face of evil, ’the best of us always find a way.” It’s a akin to Mr. Rogers “find the helpers” speech and can be real comfort during scary times. 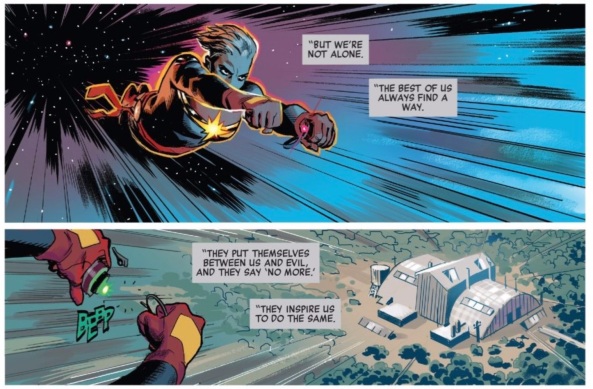