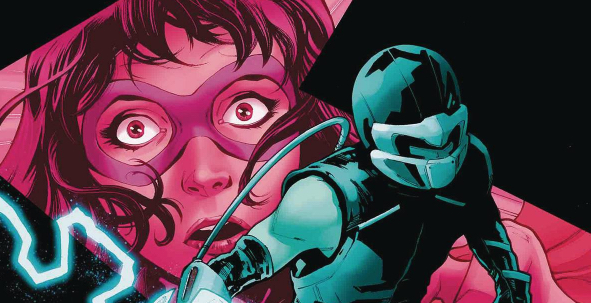 It’s hard not to look at the events of the past weekend and wonder just how we, as a nation, got here. How did we get from electing the first black president to having a president who seems to tolerate Nazis and white supremacists? How is it that our country has become so fractured that it seems we are unable to even roundly condemn men who openly advocate for the suppression of an entire race of people? There are no easy answers to these questions, but in Ms. Marvel 21, G. Willow Wilson and Marco Failla offer an explanation on why (at least in part) the world is the way it is in 2017.

Kamala is trying to save her brother and a group of Inhumans from the K.I.N.D. squad, who are masking their fear of people different from themselves by claiming they are dangerous to society. Thus, the people of K.I.N.D. are trying to imprison all the Inhumans in New Jersey. In her efforts to save the Inhumans, Kamala is locked in a battle with masked ninja-like menace with no name. As the battle spills into a local mosque, Kamala unmasks her foe only to realize that it is Josh, a friend from high school.

Naturally Kamala wants to know why Josh would do something so evil as joining K.I.N.D. and helping them with their mission. The answer he gives sounds depressingly familiar to what can be read in the news of late.

Josh, a white, straight, and privileged male feels lost in life. Despite his best efforts to feel important, Josh has a sense that he is somehow being marginalized by society. This makes him susceptible to indoctrination into K.I.N.D. and gives him a purpose, albeit an evil one, that gives his life meaning. The parallels between Josh’s decision to join K.I.N.D. and those of any given number the various hate groups active in the United States is certainly not a coincidence. In this way Wilson is telling us what she thinks is behind the current state of the union. It isn’t ISIS. It isn’t Russia. It’s not immigrants. Instead, what threatens our country most are those people who grew up here, enjoying the privilege that comes with being white, and feeling angry because other people want to be treated just as equitably as them.

That Wilson penned this issue before the events of the past weekend is a testament to her skills as a writer who is unafraid to take on the most pressing issues of our day. If only everyone read Ms. Marvel and heard what she had to say, maybe the world would be a better place, even just a little.

One comment on “Current Events Explained in Ms. Marvel 21”