Short form and episodic storytelling often relies on character tropes – this is doubly true in genre stories, where the character types are so well established. Eric Heisserer, in an incredibly tight three issues (of four total), refuses such predictability, finding exciting, engaging and innovative ways to insist on the very real nature of his characters. Heisserer seemingly has shortcuts into the human psyche, hacking his way in through seldom-used sociological and emotional channels. The whole series premise is about not taking even the dumbest superpowers for granted, but this issue starts to turn to a much more simple mantra: don’t take these people for granted.

The issue opens on a normal day for Avi. The normalness of his morning is emphasized by the classic nine-panel grid of the page. On its own, that’s not exactly revolutionary — nine-panel is regularly used to denote routine — but Heisserer and artists Raúl Allén and Patricia Martín distinguish themselves by how they incorporate phones into this layout. 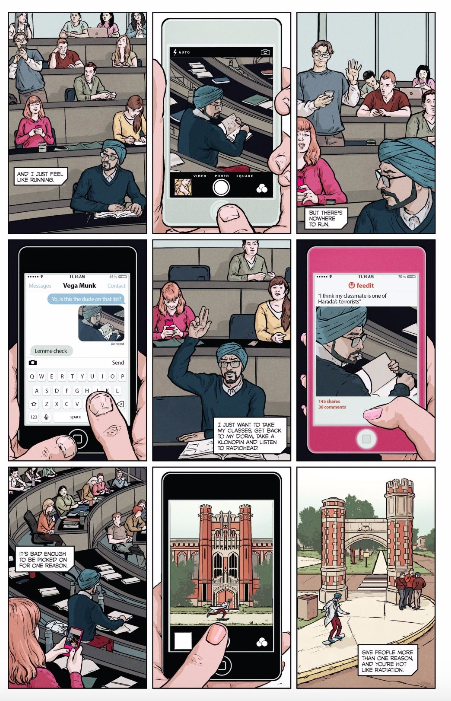 It is keenly observed that the smartphone screen is the perfect shape and aspect ratio to fill one of these panels. But Allén and Martín are also careful not to make those phone panels cold and mechanical – notice that we can see the hands of the users in each example. In showing us even the barest bits of character detail on those fingers (pink nail polish), Allén and Martín illustrate that these paranoid posts are the acts that human beings take against another human. Zooming out to the rest of the page, the perspective jumps back and forth between Avi and those blowing up his shit on Reddit, through text or with Instagram. Allén and Martín and Heisserer are compressing this whole experience into a single page – and some part of this page will hit any reader’s personal experience.

Another way Heisserer hacks into the readers empathy is by allowing the characters to reveal things about themselves without talking about themselves. This is clutch, and far too many comic book characters will state their own intentions, or confess whatever fears or darkness lie inside them. Nikki’s got my favorite revealing moment of the issue. She insists on going back to help Avi, even though he refused their help 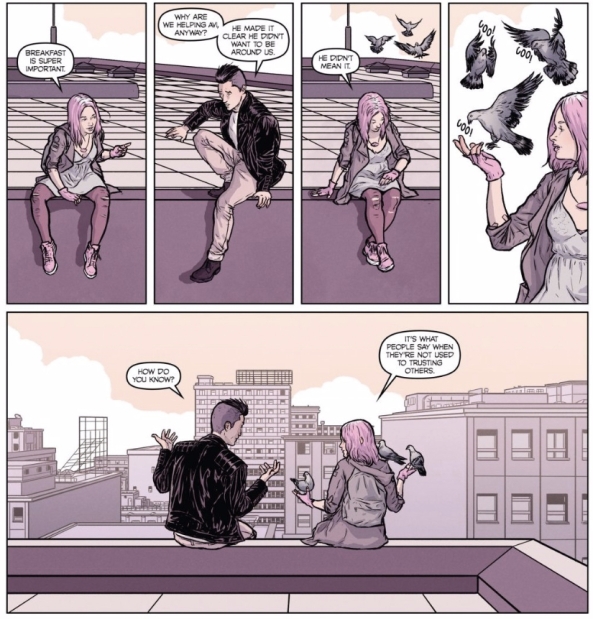 That casual pause between “He didn’t mean it.” and Owen’s follow-up “How do you know?” is genius. Is Nikki steeling herself for a subtle confession of her own distrust of everyone around her? Or is she so comfortable with that level of distrust that it’s an obvious, foregone conclusion for her? When she does answer, it’s direct, to-the-point, and deeply revealing of her own insecurities. Nikki — and the rest of the Willows crew — are fully realized, real characters, and celebrating their wins and mourning their losses is the exclusive pleasure of those of us that took a chance on a story about superhero outsiders.