I like to think of Benjamin Percy’s “Hard-Travelling Hero” arc of Green Arrow as “The Oliver Queen Apology Tour” — as Green Arrow travels across the country and ends up proving his worth to the heavy hitters of the Justice League. This time around Green Arrow is teamed up with fellow billionaire playboy/non-powered vigilante Batman.

By the second page of Green Arrow 29, it is completely evident to me how excited Juan E. Ferreyra is to be working in Gotham City again.  As Harvey Bullock inelegantly mourns the dead, Ferreyra uses the reflective crimson of the victim’s blood to show Batman approaching. Ferreyra hasn’t been holding back on the haunting imagery in Green Arrow, but this particular sequence hearkened to Gotham By Midnight.

Of course it’s no mistake that the next page shows a similar introduction for Oliver Queen: this time in the reflection of the blood-red wine of a Gotham fat cat. Percy addresses the Oliver Queen/Bruce Wayne similarities by stating that Bruce only pretended to be a vapid rich boy whereas Ollie lived the part.

Batman and Green Arrow play a dangerous game of “trust Russian roulette” as they make risky moves that would endanger the lives around them unless the other stepped in to save them. They both put on their angry faces but their actions clearly show their faith in one another. 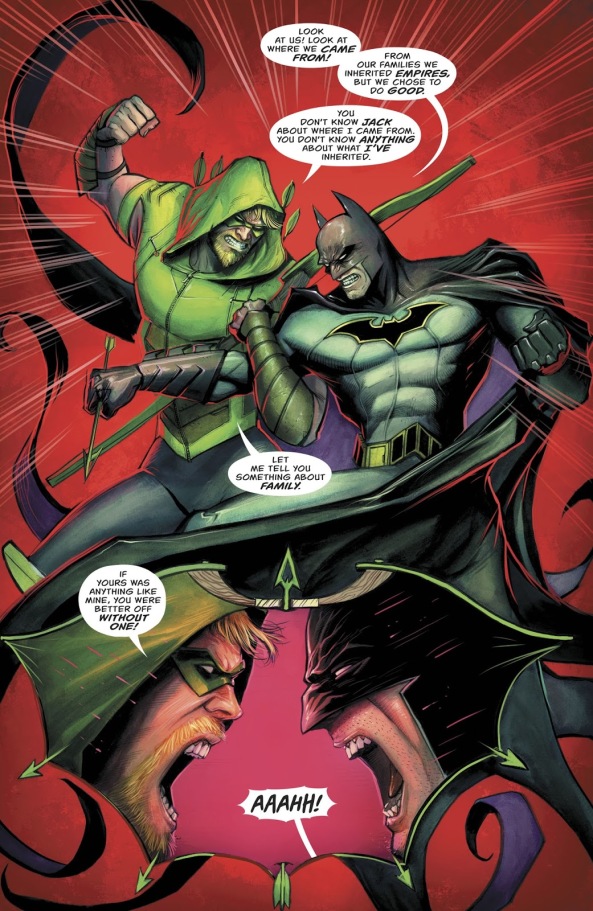 Another thing that sets the two rich boy heroes apart is their dead parents. While Bruce holds his parents’ memories as sainted, Oliver has learned that the Queens were anything but.