by Ryan Desaulniers and Spencer Irwin 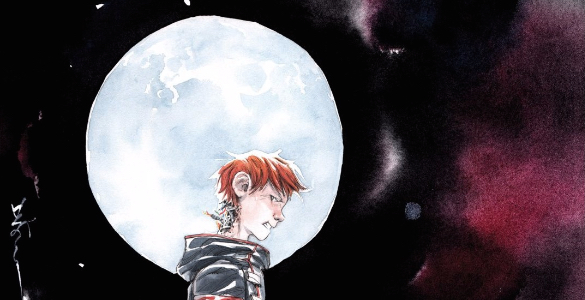 Ryan D: After last issue‘s cliffhanger, the audience wondered whether or not the self-serving Quon would risk his neck by leaving the relative safety of the ship into the deep waters in which Captain Telsa currently languished, lifelessly. Well, he did, and the sequence of Quon retrieving Telsa looks beautiful. 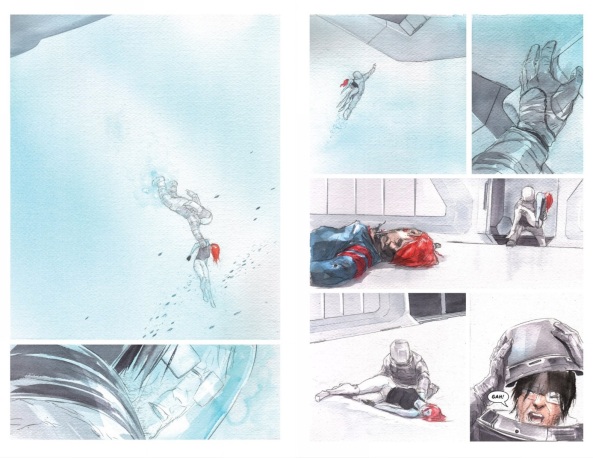 I love the use of space here. While it would be easy to just show Quon dragging Telsa back into the ship without this extravehicular page, I think that Jeff Lemire and Dustin Nguyen included this moment for a reason. Firstly, for Quon’s actions to really be redemptive, we need to see that his rescuing her wasn’t a simple button-press, but a dangerous and trying ordeal. The space between the ship and Quon in the first panel, though it is filled with a quiet, pretty blue, contains the charge of danger; leaving the ship is perilous, and one does not do so lightly. The inclusion of his actual retrieval of Telsa also adds pages of “time” in which Telsa is still submerged, without oxygen in the depths of an ocean-world. This, dramatically, helps to raise the stakes for the forthcoming resuscitation scene.

And that resuscitation scene is dramatic, though really impractical. It always boggles my mind a bit that I can suspend my disbelief in a science-fiction series which features psychic, sentient gas-creatures but that my brain draws a hard line at the use of electrocution as a means of restarting a heart. I’m sorry, but medicine doesn’t work like that, even in the future. Sure, I don’t know the exact physiology of Telsa, but she has a human father, so it’s probably a fair guess to say that a heavy electrical shock to the chest would do to her as it would to most living things with hearts: stop whatever (healthy or unhealthy) rhythm a heart has at the moment, so that CPR can be administered in an effort to restore a functional rhythm after cardiac arrest. I’ll admit that BKV just used the ol’ “magical lightning defibrillator” gimmick over in Saga and it bothered me less, but that’s sci-fi/fantasy vs. Descender‘s gritty, harder sci-fi!

Before I go on a rant about the science of dry-drownings vs. wet drownings, hypoxia and hypercarbia, and whether or not Telsa would probably be dead from the pressure of the ocean alone, I’d like to mention the use of General Nagoki in this issue. While his presence has certainly been felt throughout the series, readers haven’t seen him in many situations aside from military strategy meetings and the occasional scene of familial conflict with his daughter, Telsa. This issue, however, shows us some new sides to the General as his fleet encounters devastating casualties in Psius’ trap such as panic, shock, and eventually, in the interrogation scenes, desperation.

In that first panel, though he’s flanked by armed guards, Nagoki seems small and frail as he speaks of his armada’s losses — a distinct change from the resolute and taciturn military man we’re accustomed to seeing. Then, as the page goes on and into the traditional dialogue “shot/reverse shot” pattern, I really dig how Nguyen draws him. Whenever the focus is on Andy, Blugger, or Effie, Nagoki’s shown from behind as a stalwart, solid, immutable silhouette, matching what we know of his character; however, when the shot comes back to him straight-on, we see the General in various states of heightened emotion, ones which we’ve never seen him display before. I find that the use of this visual counter-pointing sells to us how disastrous and overwhelming his day has been. This helps me, as a reader, to engage with this character and want to see more of him.

Spencer! I know you were in suspense about whether or not Quon would go out on a limp for Telsa. Now that we know he has, and with what happens to him shortly thereafter at the hands of Tim-22, I want to know what you think about Quon’s redemptive turn. Was it too little too late, or did this sequence work for you in the scope of his character journey thus far?

Spencer: I was indeed in suspense, Ryan. The cliffhanger that closed out Descender 22 was brilliant because I was legitimately unsure of whether Quon would try to save Telsa or not. Purposely letting someone die seems extreme for Quon, but he’s also been known to be cowardly, mercenary, and manipulative, plus he and Telsa never exactly got along — either response would have felt in character for Quon, leaving me with one of the more invigorating cliffhangers in recent memory.

Ultimately, I’m satisfied with how his arc plays out. If this is indeed the end for Quon (and I’m not convinced it is — the cast of Descender are nothing if not resilient. Just ask Tim-22), then he goes out on a high note, finally using a newfound ability to help others instead of himself (as he did way back when he found the technology that fuels the Tim models), and that growth feels earned.

Of course, as always, Nguyen’s art is essential to selling Quon’s arc, especially his fate as the issue closes. 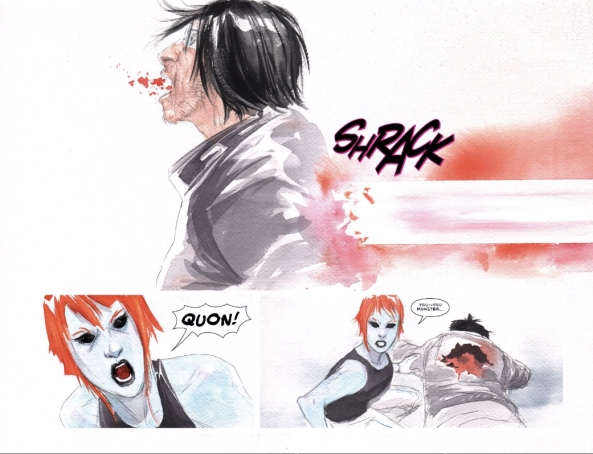 Nguyen and Lemire are smart to devote an entire spread to this moment. The sudden change in size and sheer amount of space given to Tim-22’s attack emphasize how shocking and significant it truly is; the negative space in the background does the same, leaving no distractions on the page, just Quon, the attack, and Telsa’s horrified reaction. Even just the color choices in this spread are outstanding — it’s just white, red, and Quon, a mix of colors and objects that’s striking and minimalistic, as effective on an aesthetic level as they are on a storytelling one.

Another moment where Nguyen’s sense of space is essential to selling a moment comes a few pages earlier, as Tim-21 makes his escape from the Hardwire.

That last panel is the exact opposite of the spread we just examined — small, cramped, and full of color, detail and grit. Tim’s tiny figure crammed into the corner of that panel emphasizes the danger Tim’s in, how outgunned he is by the Hardwire, and the lengths he’ll go to to escape their grip. There’s a stark contrast between this vent and the rest of the Hardwire’s otherwise pristine and antiseptic ship — the Hardwire are currently in control and in possession of great power, but Tim-21’s continually been reduced to scrambling through the dirt and muck of the universe just to survive.

The kind of power the Hardwire now have at their fingertips is likely the point of this arc, appropriately entitled “Rise of the Robots.” Throughout Descender 23 it’s the robots — or even just characters with robotic traits — who are making out best. Lemire and Nguyen emphasize the edge the robots now have: the Hardwire score an unfathomable victory against the UGC; Tim-22 can launch deadly attacks even as he barely clings onto his functionality, quite literally holding his head in his hands; Quon’s robotic arm allows him not only to escape his prison, but to save Telsa’s life.

Even Queen Between comes out of the negotiations with General Nagoki on top. While this issue’s fully-human characters — Telsa, Nagoki, Andy, and I suppose Blugger — all seem scared and uncertain, or just trying to make their way through a tense negotiation, Between knows exactly what she wants and goes for it. While Queen Between seems to have been a leader and an activist in her previous life, this is the most assertive and proactive we’ve seen since she joined Andy and the rest of the cast on their quest.

Yet, I wonder about Between’s motivation in giving up everything she knows about Tim-21 and the Hardwire to Nagoki. She’s no fan of the UGC, and it seems unlikely she would purposely sell out a robot to them, even one she’d never met — she’s too noble and idealistic for that. So what’s Between’s endgame here?

Between this and the actual cliffhanger, Descender 23 continues to raise questions that will draw me back into the next issue. Descender‘s mix of politically-relevant narrative, complex and nuanced characters, and lush, contemplative art continues to be a winning combination.