Taylor: I never have high hopes for crossover issues simply because, more than anything else, they tend to be really goofy. Goofy can be a good thing, but the kind of goofy I’m talking about here isn’t. Going into this issue, I was prepared to be underwhelmed simply because the the idea of pre-Mjolnir Thor teaming up with the current Thor felt, well, goofy in a bad way. However, I am delighted by this issue because it knows exactly what it is. Writer Jason Aaron is firing on all cylinders in an issue that is at once funny, brazenly over the top, full of great character moments.

The action in this centers on the Unworthy Thor and his quest to lift Mjolnir while also fulfilling the prayers of his viking worshipers on earth. The latter of these leads Thor to Egypt, of all places, to lead some vikings into battle against some ancient Egyptians and Apocalypse. Later, Jane, the Mighty Thor, shows up to add more chaos to the mix. 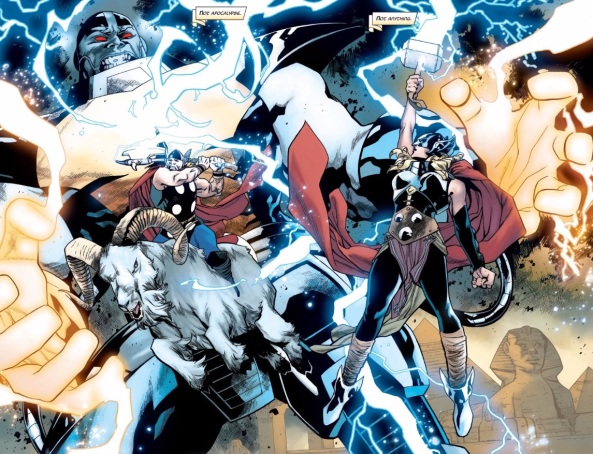 If that all sounds a little much (as Mahmud Asrar’s art captures perfectly above) believe me, it is. However, what saves the issue from being goofy in the bad way is that Aaron eschews any modicum of restraint and goes all-fucking-out here. Not one but two Thors, one of the most fearsome villains in Apocalypse, and Vikings against Egyptians, and of course a flying goat. Instead of risking an issue that falls flat because it can’t meld to discordant hero mythologies together, Aaron just lets things rip and the result is an issue so outlandish, it can’t help but be enjoyed.

The humor that Aaron infuses into this story also does much to make it an unlikely source of entertainment. Much can be said for the banter Jane and the Odinson have with one another, or the way the vikings are pictured stealing the famous lost nose of the Sphinx. What really gave me a good laugh was when the Odinson complains about the formal clothes Odin makes him wear to a fancy Asgadian banquet.

Anyone who knows a snuff about Silver Age comics will instantly recognize Thor’s classic costume here. The wit that lies herein is that Thor finds these clothes goofy just as much as we do with our modern sensibilities. The joke here is that Thor doesn’t wear these duds because he likes them — he wears them because he has to. This is at once a playful dig at the sometimes bizarre sartorial choices of Silver Age heroes and an act of forgiveness, from Thor, for having ever worn such a thing.

Just because this crossover issue if both funny and over the top doesn’t mean that lacks substance, however. One of my favorite parts about this issue was the narrator who offers candid insights into the events and thoughts the duel Thors are undergoing. Specifically, when Jane shows up to help fight Apocalypse the narrator provides some insights which readers of The Mighty Thor would find most interesting.

The reveal about Jane’s character here is fantastic. Aaron could have easily stopped at saying “Jane Foster feels most alive when she is fighting.” However, Aaron elaborates on this because who wouldn’t love wielding the power of Thor? Aaron posits that Jane feels most alive when she’s fighting because it gives her something she can actually physically fight against. The cancer that is threatening to end Jane can’t be fought conventionally, and that’s frustrating as hell for Jane. Apocalypse, on the other hand, has a huge face that is just ripe for the punching. This reveal about Jane’s character, and the thought that she is slipping away to becoming a full time Thor, gives this issue and unexpected amount of depth.

Drew! I had a blast reading this issue! What are your thoughts? Does the go-big-or-go-home nature of the issue offend or please you? Do you think we learned just as much about the Odinson as we did Jane here? While nothing can top Russell Dauterman’s Thor-art, I did really enjoy Asrar’s pencils here. Do you feel the same way?

Drew: Given that Aaron’s run on Thor has always been about this same manic, absurd bigness, I couldn’t be more pleased with this issue. Unlike the other writers on Generations, Aaron already has a great deal invested in both of these time periods — young Thor and Jane-as-Thor — so this feels like an entirely organic (and thematically important) chapter in his saga. Indeed, in bringing Jane together with young Thor — a character that featured prominently in Aaron’s very first run — he’s cementing her legacy as another essential period in the History of Thor. If one of the things that makes Thor Thor is adventuring with Young Thor, Jane just earned yet another stripe (as if she needed it).

And my enthusiasm for this issue definitely extends to the art. It might have been fun to see Dauterman or even Esad Ribic give either of these eras their signature touches, Asrar is a great fit. His knack for exaggerated expressions and bombastic action make him a perfect match for young Thor. But he also handles Jane with a perfect mix of grace and power — almost as if Asrar has extensive experience drawing superpowered women.

I mean, holy shit. If there’s a more heroic way to introduce your hero, I haven’t seen it.

I’m also impressed with Jordie Bellaire’s colors here. I’m so used to Matt Wilson’s dazzling color work on Mighty Thor that I took it for granted that he was the colorist on this issue. I know “I confused one artist’s work for another” isn’t the best compliment (and upon closer inspection, it’s easy to spot differences in their approach to color choices), but I think it speaks to Bellaire’s strength that this issue looked so much like Mighty Thor that I almost didn’t notice. This is just what Thor is supposed to look like.

For as inspiring as Jane is in this issue, it’s she who ultimately walks away inspired, marveling at young Thor’s humanity. This seems to help her resolve not to stay Thor indefinitely — to continue to revert to her human form for fear of losing touch with what it means to be human. That’s a big resolution for this character, but Aaron earns every bit of it. I’ve always been impressed at how Aaron makes his crossover issues essential reading for his Thor saga, and this is no different — we’ll be feeling the fallout of these events in Mighty Thor very soon.

Which I guess brings me to that closing scene between Odin and the Phoenix. This obviously has a significant connection to the previous arc on Mighty Thor, but the issue also directs us to Legacy 1. I suppose it makes sense that Aaron would seed his next crossover book in this way, but doing so also brings Legacy under the umbrella of his Thor saga. His run has always been about connecting to Thor’s deep past, but this winds the clock back even further, establishing older, broader connections between the gods of Asgard and the rest of the Marvel Universe.

All of which has me excited for Legacy. I mean, my interest in this issue was almost entirely based on Aaron’s byline, so knowing that he’s writing Legacy AND that it has some deep connection to his Thor mythology means I can’t really pass it up. If it’s anything like this issue, I’m sure I’ll love it.

One comment on “Discussion: Generations: The Unworthy Thor and the Mighty Thor 1”