Spencer: One of the few consistencies throughout all iterations of Archie is that Archie Andrews, as a character, catches a lot of flak, not just from his friends, but from readers and viewers especially. Whether it’s his inability to choose between Betty and Veronica in classic stories or his almost complete cluelessnes/uselessness in Riverdale, there’s a lot to rag on the poor kid about. Why does he continue to endure and work as a lead character, then? Mark Waid and Audrey Mok pinpoint the reason in Archie 23: whatever his faults, Archie loves his friends with all his heart.

This issue continues examining the aftermath of the tragic drag race that briefly left Betty in a coma, and now may have left her paralyzed from the waist down. It’s a bit strange that we’ve yet to see much of Betty’s perspective on what’s happened to her (other than her very in character, very effective moment of vowing to fight back), but that’s always a problem when creating a story that kills/incapacitates a character — there’s a limit to how much they can actually be in the story. Waid and Mok do an admirable job of keeping Betty in the issue even when she can’t physically be there, though, mainly by pointing out how much she means to Riverdale and the hole her absence leaves in the town.

The sheer amount of work Betty does throughout the town is honestly a bit over-the-top, but it’s exaggerated in the same way that Archie’s clumsiness is — a bit of hyperbole to make a point about the character. In Betty’s case, it’s that she has morals and cares about others and makes great effort to live up to them all. In Archie’s case, it’s that he wants to help, but can’t seem to succeed no matter how hard he tries. 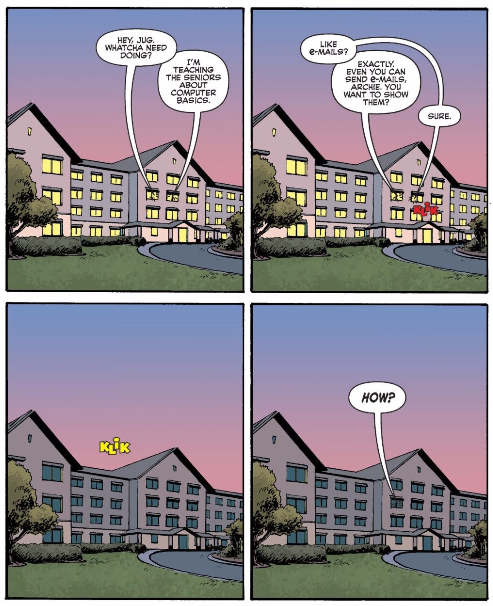 Chapter 2 of the issue plays this for laughs, but Waid and Mok dramatize this as the issue continues, practically torturing Archie in his inability to do anything for Betty. The thing is, that’s not necessarily true.

When Betty needs him, Archie drops everything to be there for her — he’s still covered in paint, evidence of another one of his failures, but doesn’t care at all — and just from the expression on her face, it’s clear that Archie’s presence means the world to Betty. Still, Archie wants to do more. His desire to do something big for Betty could almost be perceived as selfish — as his trying to atone for his role in the accident, maybe — if he wasn’t so wholly focused on Betty. He’s not distraught because he can’t do anything, it’s because he can’t do anything for Betty. He’s not trying to earn a win for himself, he’s trying to show Betty how much everyone cares about her, how much she means to not just him, but the town of Riverdale. 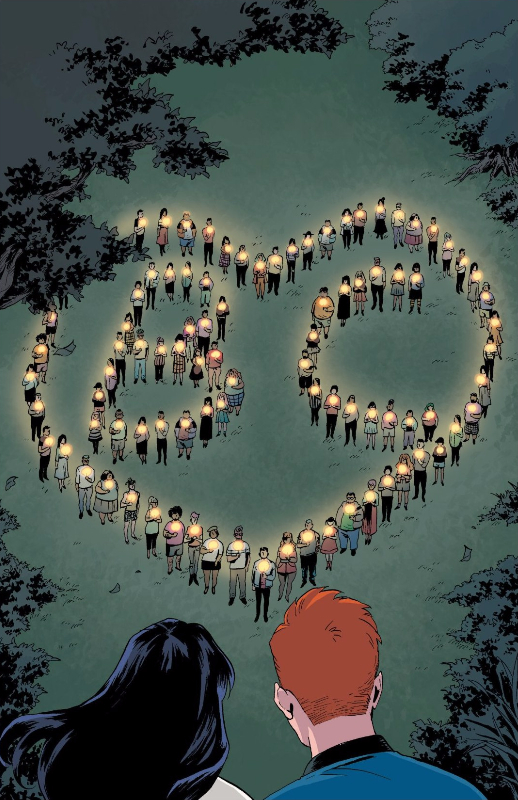 And again, it’s a win because Archie was able to bring people together for Betty (still, it’s weird that Betty doesn’t actually get to be there to experience this herself, but that might be a bigger issue with these kind of memorials than this issue itself).

Of course, if Archie remains palatable as a protagonist throughout this story, it’s not just because Waid and Mok find his most noble qualities beneath all his mistakes — it’s also because they haven’t fully let him off the hook for his mistakes either. The issue opens on Archie essentially shifting his share of the blame for his role in the accident onto Reggie, but if Archie is trying to forget that he’s culpable too, others haven’t. Archie’s friends certainly don’t seem pleased to see him when he first shows his face at Pop’s — and that’s before they realize that they’ll have to babysit him!

It’s an odd moment — especially as they all leap right into easing Archie into the group in the next panel — but it indicates to me that his friends might be harboring some anger at Archie for his role in the accident. Betty’s father is less subtle, giving Archie a firm, blunt reminder that they “know” what being paralyzed will mean for Betty, and when Archie visits Betty in the hospital, while everybody else seems overjoyed, Mr. Cooper can only glare at him.

Archie is very clearly oblivious here at best, but even this is a good sign for him. Why? Because he has room to grow here, and the fact that Waid and Mok continue to slip in little references of other characters noticing the problems with his behavior means that they’re likely not going to let him off the hook either. It’s a lot easier to emphasize with and appreciate even a flawed protagonist when you know that the creators understand that they’re flawed too, and Archie‘s creative team clearly does.

So Ryan, I know you’ve been hard on our boy Archie over the last few issues — how are you feeling about him after this one? How do you feel Waid and Mok are doing handling the tone of the events surrounding Betty’s accident and diagnosis, or the possibility of her having a disability? Both can be tricky to achieve.

Ryan M.: Waid and Mok strike an effective balance between pain and humor. The story never gets morose, but still takes what happened to Betty very seriously. Archie’s series of volunteering mishaps are this in microcosm. The gang is serious about taking over Betty’s work while Archie’s klutziness keeps things light. Especially after the last two issues, first with Betty flat-lining and then the reveal that she is paralyzed, this issue feels a bit like a reset.

The issue opens with an image of a vandalized vehicle.

It’s not clear at first what car this is. The word “DIE” is scrawled on the hood and a crowbar lies on the ground. It’s a visceral image but doesn’t seem to fit in the narrative established in the story. The car evokes anger and since the message is obviously for a person, a bit of impotence. Destroying an object is a fairly futile gesture. It’s about release of tension rather than direct confrontation. There is also a sense of retribution. When Waid and Mok reveal that this is a car that lives in Archie’s mind, the same world where he addresses the reader, the car’s importance becomes more clear.

Archie gives us his traditional introduction, standing in front of the sestroyed car, and telling the story of Betty’s accident in a way that makes Reggie an evil villain. Archie is a pretty self-involved character, so his perspective on the accident releases him of culpability. I may be tough on old Arch, but it stems from knowing that he is capable of being more aware of the world around him. The same myopia that makes him a nightmare on each of the charity projects lets him move through the world not anticipating or noticing the hostility he receives from Mr. Cooper or his friends. As Spencer wrote, Waid and Mok are able to give us an Archie story in which his single-minded desire to help Betty is clearly about her and not just his feelings.

This is not a series designed to make you cry, and Waid and Mok give us that humor and traditional “Archie” feeling without asking the reader to forget the recent tragedy. In the middle of the ongoing Archie storyline, Waid checks in with Dilton and Moose. These are secondary characters, but the affirmation of their friendship in a wordless one-page chapter is a testament to the series’ themes.

Again, Waid and Mok combine the reaction to Betty’s accident with characters behaving in typical Archie ways. Dilton and Moose walking away together is as expected as seeing Dilton holding a bowie knife is unexpected. I literally gasped aloud when I saw his hand clenched on the knife in the ground. While this kind of impulsive behavior is out of character for Dilton, it’s perfectly in line with what would happen to him when dealing with powerlessness and anger.

Some of the more hyperbolic promotion for this story line claimed that Riverdale will never be the same! Waid and Mok have been able to honor that idea while assuring the reader that the important things will remain.