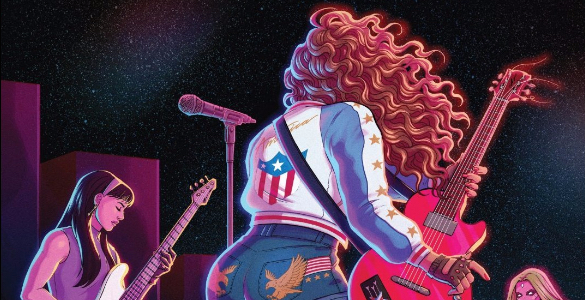 There are many kinds of love, so it’s always frustrated me that society places such importance on romantic love as the be all, end all of adult life. Romance is great, but the love of friends and family can be just as fulfilling and vital, if not more so. America 6 finds Gabby Rivera, Kelly Thompson, and Ramon Villalobos exploring the role each of these kinds of love plays in America’s life, and interestingly enough, it looks like they might just agree with me when it comes to their importance.

Romance is still an aspect of America 6, and still in the form of Magdalena Velez, whose apparent betrayal of America last month is revealed to be the result of her father being held hostage by the Midas Corporation. Magdalena attempts to sacrifice herself in a stab at redemption, and America forgives her, even saying that she wants to hang out with Magdalena again. The option for romance is very much left on the table, but of the various relationships and kinds of love this issue explores, it also gets the least attention. Far more important is America’s best friend, Kate Bishop.

Kate and America’s relationship may be platonic (much to the dismay of the entire internet), but that doesn’t mean that they aren’t the most important people in each other’s lives right now, that they don’t absolutely adore each other, that each aren’t filling very important needs in the other’s life. For the moment, Kate means more to America than any potential romantic partner.

But that doesn’t mean that Kate’s all America needs, either. For all of America’s frustrations and reservations about Madrimar, the revelation that she’s America’s grandmother fills a hole in America’s life that’s been empty ever since she arrived on Earth.

Despite Kate, despite any of her romantic partners, America still felt alone without family. The love of Madrimar, the connection to her past that she brings, is something America’s desperately been searching for.

What this says to me is that there are many different kinds of love, and that no one kind of love is more important than the other. We all need to be loved by many different people in many kinds of ways in order to feel fulfilled. All we have to do is let them in.

One comment on “Different Kinds of Love in America 6”