One of the most valuable lessons anyone can keep in mind when consuming media is that not everything is for you. Different works have different target audiences, and just because a particular work doesn’t appeal to you specifically doesn’t mean it doesn’t have worth. I’ve always felt like this has been a problem especially in mainstream comics, where attempts at books for all ages or younger readers are met with derision from some of the more entitled fans. We need younger readers to keep this medium alive, and kids deserve stories created especially for them — it makes no sense to judge those books by the same standards we would titles aimed at adults. That’s something I had to keep in mind while reading Star Wars Adventures 1 — I am decidedly not the target audience for this book, but I’m glad it exists nonetheless.

Even the two stories contained in this issue seem to have slightly different target audiences. Cavan Scott and Derek Charm’s Rey-centric “Better The Devil You Know” is just about the definition of all-ages, bringing us a straightforward adventure yarn that highlights Rey’s skill and heroism (she attempts to rescue someone she hates, who absolutely doesn’t deserve it, because it’s the right thing to do and because it will stop someone even worse from hurting more people) and features clear, exciting work from the always welcome Charm. 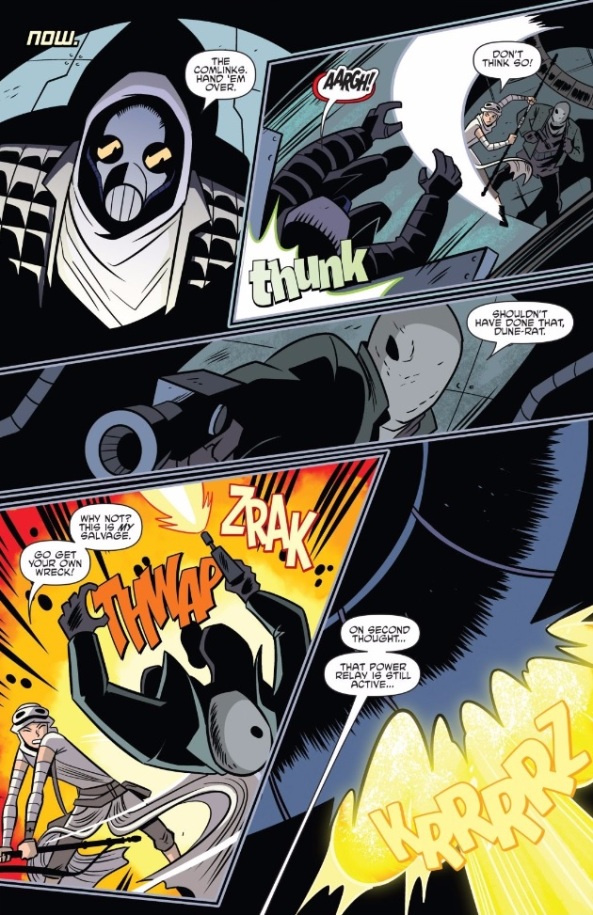 There’s nothing revelatory about this story — there’s only so much the comics can do with Rey now anyway, but even then most of its insight into the character is reestablishing facts we already know about her — but it certainly has its charm and purpose.

The back-up story, Scott and Jon Sommariva’s “Tales From Wild Space: Stop Thief!” immediately feels more juvenile. The actual story casts Obi-Wan in a role any nameless Jedi could have filled, and while it’s cute and clever, it’s also a kinda saccharine morality tale. The segment’s “hosts,” Emil Graf and his robot/monkey-lizard pals, especially feel targeted at the lowest common denominator. Emil is the grandson of a character from earlier Star Wars stories, so I’m sure he’ll find his fans, and kids will probably love his crew’s antics, but I found myself rolling my eyes at them.

But again, I’m not the target audience for this book, so that’s not the end of the world! While the Star Wars line of comics so far haven’t exactly been adults only, I do think it’s great that there’s now a title especially for younger readers, and I hope Star Wars Adventures finds its way into their hands.