In order to increase the likelihood that students will call for medical assistance in an alcohol-related emergency, some colleges and universities have instituted “Good Samaritan” or medical amnesty policies that eliminate or reduce judicial consequences for students involved in alcohol-related medical emergencies. Other schools may reject this type of strategy based on arguments such as the need to “avoid sending the wrong message” about the seriousness of underage drinking.

Drew: I first encountered the notion of a medical amnesty policy in college, though I can’t say I gave it much thought at the time. Indeed, it wasn’t until I was in a position to be worried about dangerously drunk/overdosing students not coming forward (I worked for several years at a summer camp for high-school students) that I started to appreciate how boneheaded the “avoid sending the wrong message” camp truly is. Mostly, it just forgets that the rules against drinking and alcohol use are there for the safety of the students in the first place, somehow valuing the sanctimonious tut-tutting of saying “you shouldn’t drink” over, you know, saving the life of a kid who broke the rules. It’s such an obviously flawed attitude, I was honestly taken aback when I saw reports that some sheriff in Florida was explicitly not offering amnesty to folks with warrants seeking shelter from Hurricane Irma. Or, more specifically, he was insisting on conducting unconstitutional ID checks in order to deter anyone with a warrant from seeking the refuge of a hurricane shelter, endangering their lives because he somehow values laws — the things society makes in order to protect people — more than actually protecting people.

Before I get too off topic, my point is that we’re often too preoccupied with the letter of the law to really parse its spirit. Certain things may be illegal because they’re dangerous, but if coming forward about illegal activity makes things objectively less dangerous, we should encourage that behavior. The article I quoted at the top of this piece offers objective data in support of that idea after studying a medical amnesty policy at Cornell, but I think it’s crucial to note that this type of thinking doesn’t just operate at the institutional level. Even in our daily lives we often react badly to honesty simply because we dislike the truths being revealed, but like the researchers at Cornell, we must recognize how that attitude only makes the situation worse. I found myself thinking about this phenomenon a great deal as I read The Wicked + The Divine 31, as issues of amnesty (and lack thereof) cropped up throughout the issue.

This theme first rears its head as Persephone comes clean to Baal over the phone:

We only get her half of the phone conversation, but it’s really all we need — artist Jamie McKelvie does such a good job showing her winces and defensiveness that we understand exactly what Baal is saying, even though we don’t see a word of it. But it’s the words here that really grab me. Kieron Gillen provides two reasonable explanations for why Persephone didn’t immediately turn Sakhmet in, but neither seem to convince even herself. She comes back, rightly, with the point that she’s doing the right thing now, but I can’t help but wonder about her motives.

Indeed, it’s not until Persephone is clean out of cigarettes that she calls. We have no idea how long that takes (thanks in no small part to the static lighting of her underground squat), which adds an intriguing question mark to Persephone’s true motives. Does she wait just long enough to be sure Sakhmet is gone? Does she wait until her conscience gets the better of her? Or is she maybe afraid of what happens if she’s caught abetting a murderer? Like she says to Baal, maybe it’s all or none of those things, but I can’t help but wonder how all-consuming her nihilism is, and if “doing the right thing” has any meaning to her at this point.

But then there’s the amnesty Amaterasu offers Sakhmet, not out of some noble intention of encouraging moral action, but out of her characteristic self-interest. At least, that’s my read on it, though that should be taken with the grain of salt that I find Amaterasu to be utterly insufferable. True to form, her opinion of the British Museum reflects just about the most privileged imperialist attitudes one can hold. And her downfall seems to hinge on her complete inability to understand that Sakhmet’s relationship to the idea of “family” is completely different from her own. Amaterasu has fond memories of going to the museum with her father (presumably while nibbling on a 99 or some other thoroughly British treat), so presumes that Sakhmet must, too. Of course, the only thing we know about Sakhmet’s father is that she ate him. So: 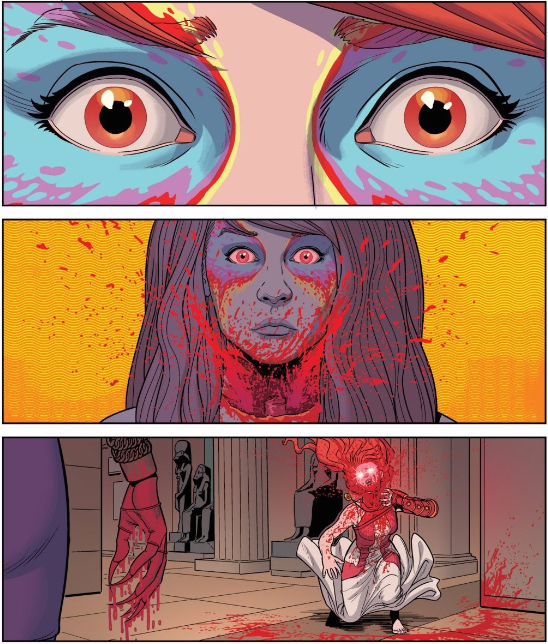 Spencer! There’s so much I didn’t talk about in this issue. Woden’s plan and that Cass/Dio scene are the obvious omissions, but I’m most lamenting that I didn’t leave space to talk about Matthew Wilson’s colors. I can’t get over how good the rendering on Persephone’s hair looks during that phone conversation, though the blasts of colors during the rave are probably the thing to talk about. I don’t want to tie you down with any prompt, but I’m hoping you can pick up some of my slack.

Spencer: You’re right, Drew, about Wilson’s colors. I appreciate you pointing out the lighting on Persephone’s hair in the phone scene, because it is, indeed, brilliant stuff. I’m so used to praising Wilson’s work for the unique intensity of his colors, but the more technical aspects in that scene are brilliant — the way the light shines on her hair almost makes it look like clouds, and it’s an absolutely beautiful effect.

That said, yeah, there’s no way I can’t talk about the colors at Dionysus’ rave.

I mean, just look at it! Wilson’s such a great fit for WicDiv because he can create these vivid, otherworldly shades, and in this particular page it works on three levels. You’ve got the neon bursts of the partiers, the darker, but no-less vivid rendering of Dionysus’ hivemind in the sky, and then the more “real” peek at Woden, the Norns, and their machine in the corner.

The colors are actually of vital importance to our understanding of the characters and their actions throughout this plot. When Dionysus is in charge of the hivemind each partier is a different color — he’s celebrating their individuality, bringing together all the partiers but allowing their unique preferences to drive the party. Dio’s quite possibly the most selfless of the Pantheon: he only cares about making those who come to him happy.

When Woden takes control of the hivemind, though, the change is immediate and obvious.

Not only are the partiers all echoing Woden’s stance, but they’re all bathed in different shades of green, Woden’s color scheme. Unlike Dio, Woden doesn’t care about the partiers’ individuality — he uses the hivemind to assert his own desires. In many ways he’s Dionysus’ polar opposite, as selfish as Dio is selfless.

I shouldn’t have been surprised when Woden betrayed Cass and Dio (even though I was) — not only had he been far too cooperative for far too long, but he’d spoken several times of how Dionysus’ hivemind was one of the only miracles he hadn’t learned to reproduce yet. Of course he’d want to take control of it, if only to prove that he could. But what’s his larger goal here? Between being under Ananke’s thumb and working with Cass/Dio, I don’t feel like Woden has ever had a chance to even have a larger scheme beyond his own immediate selfish satisfaction before. Has that changed now? With the power of Dionysus’ massive hivemind he could accomplish almost anything, and that’s a terrifying thought.

Even before we get to that realization, the moment where Woden turns on the Norns is one of the most effective beats of the entire issue.

I know from his authors’ notes that Gillen thinks long and hard about his page-end cliffhangers, but this may be one of the most effective ones he’s ever done — my jaw was practically on the floor, and I was immediately terrified for Cassandra. McKelvie milks Woden’s turn for all it’s worth — he doesn’t just pull a gun, he quite literally whips it out from behind the console in a giant circular pattern, the most dramatic motion he could possibly make here. The motion practically screams “betrayal!” before the readers’ mind even fully registers what’s happening. Yet, while Woden may be attacking the Norns, it’s Dio’s hivemind that’s reflected in his visor. Cass is just collateral damage — what he’s really got his sights set on is obvious long before the text makes it explicit.

My own personal summary of this issue is that “Woden is back on his bullshit again,” but that really applies to just about every character here. We continue to see the fallout of the Imperial Phase and its foretold madness, and Woden’s mad ambition is only one symptom. Amaterasu’s self-centered cluelessness (which was growing at an exponential rate up until her death) is another, and that’s what truly leads to her death. Amaterasu patronizes Sakhmet, and she’s completely clueless to what’s actually driving Sakhmet or how she really feels about anything. At first glance Amaterasu should be one of the most harmless members of the Pantheon, but her shortsightedness and self-centered worldview is, in a way, just as dangerous as Woden — it echoes the danger that the British Empire, which Amaterasu seems so fond of here, once posed, the ability to trample over others while thinking they’re doing them a favor.

Even the Pantheon’s best qualities seem amplified to dangerous levels thanks to the Imperial Phase. Take Dionysus.

He hasn’t been sleeping because he wants to make as many people happy as possible. He endured abuse from the Morrigan in order to protect Baphomet. Now Cass is worried that Dio is taking a risk he can’t handle just to please her. Dio’s selflessness is his best quality, but it’s still putting himself — and quite possibly others as well — in danger.

And the dangers the Imperial Phase pose aren’t just immediate threats like Sakhmet and Woden. Amaterasu’s death has an unforeseen side-effect — along with Baal, she was the only member of the Pantheon capable of directly harming the Great Darkness, meaning that her death has just doubled its power. The madness of the Pantheon allows greater evil to continue growing unopposed around them. At the moment they may not just be a danger to themselves and the rest of their fellow gods, but quite possibly to every single living being on the planet. That’d be impressive if it wasn’t so terrifying.