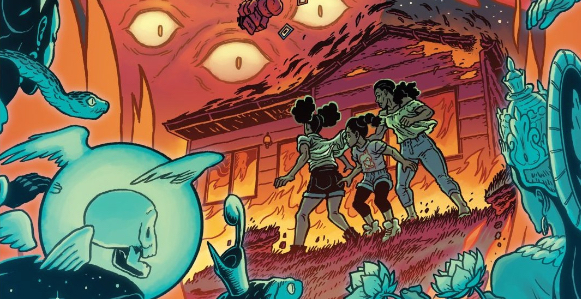 It’s amazing how quickly the concept of normalness can completely reverse itself. When we first meet Cloudia, Rex and their mother, it is during a painfully mundane car trip. The little sister is chattering away in the front seat, while the teenager trades texts with a boy and is generally angsty. That is our base-normal: reflective of a real world we immediately recognize. There’s a touch of narrative whiplash as writers Ulises Farinas and Erick Freitas and artist Daniel Irazzari drop us into a realm of forgotten gods under siege. Eventually, that becomes our normal: reflective of the bombastic medium of comic books. Issue three of Cloudia & Rex concludes the miniseries by interrupting that fantastical reality with grounded, human elements, proving there’s no limit to how many times you can turn a narrative on its side.

The first such tonal shift comes right at the beginning of the issue — as the mother uses her new time traveling abilities to get lost in memories of her late husband. The screaming story of the god-pocalypse is suddenly muted in favor of a frequently-wordless tale of life and loss. Papi dies, and there’s no divine sacrifice associated with his death, no appeal to the mercy of a Great Waveform. He just dies — randomly, accidentally, and his family feels the loss. 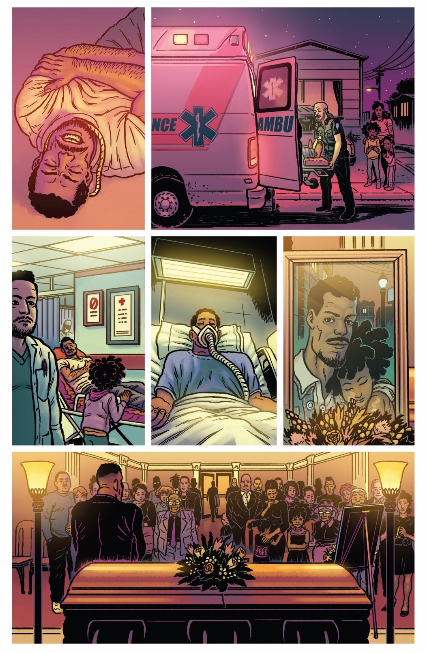 Meanwhile, Cloudia and Rex are banging on this blue time-bubble-thing, and have to literally pierce the dome with a stone before their mother returns to the fray. It’s a moving display of the power of the real world intruding on the god-fueled fantasy of the main story.

Of course, sometimes the real world interjects with some much needed levity. Cloudia tricks Tohil into thinking Gerard is some kind of powerful god no one has ever heard of that she still has trapped away in her phone. Leading to one of the funniest juxtapositions in the issue. Tohil heroically swan dives off the World Tree to retrieve the phone, majestically cradling the phone seconds before he hits the ground. But, y’know, Gerard’s not a god — he’s a teenage boy, hanging out in his boring teenage-boy room. 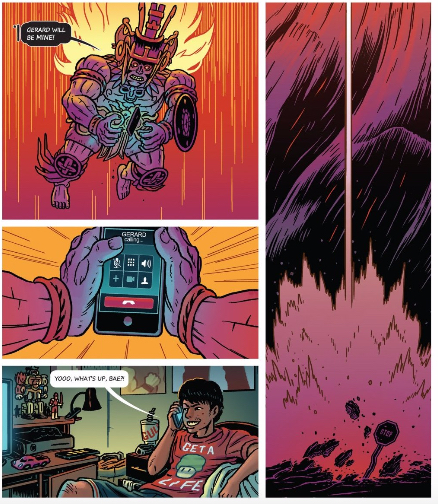 Which leads me to the final collision of fantasy and real life: Cloudia unites the worlds of men and gods — a process that demands a “Blood Sacrifice.” Cloudia gets her first period in that moment, fulfilling the need for blood and saving the world. I don’t totally have a solid handle on what to take away from that — is it a statement of Cloudia’s adult ability to save her family where her mother came up short? Or is it just another silly way to cram the real-world mess into the realm of gods?