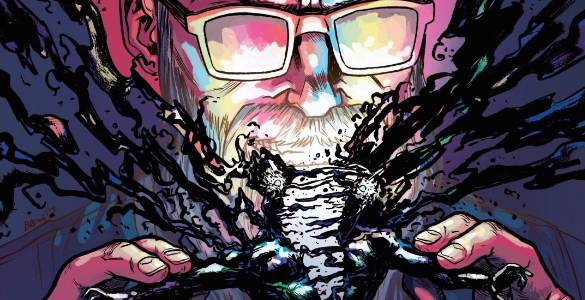 Charles Soule and Ryan Browne haven’t been shy about Wizord’s twisted morality. The very first issue of Curse Words tells the tale of an interdimensional wizard sent to destroy the Earth, but who is charmed by New York City. Lest we think Wizord a pure soul, we’re quickly reminded of his origins when he shrinks a packed baseball stadium and exiles hundreds of thousands of people to a hell dimension, just to sweep his misdeeds under the rug. That’s a weirdly easy thing to forget — out of sight, out of mind, right? Wizord’s a monster, and while Soule’s script may insist on making him relatable, Browne’s paneling has an agenda of its own. Those cool chevron panels don’t just say “Wizord,” they say “evil.”

Of course, you’d be forgiven for thinking that those jagged lines were just announcing Wizord’s magical powers. Check out the first page, which starts nice and squared off at the top, with the US President clearly in control of the non-magical situation.

There’s a pretty clear point of contrast between the clean 90 degree angles created by the dividers on panel one and the trademark W carved into the bottom of panel two. Look at how confidently Wizord can throw his paw out there for a handshake, even with a gun pointed at his face. The next couple pages stay locked into Wizord’s paneling, as he explains every way mankind doesn’t know they owe their safety to him and him alone. It’s a power play, and when it fails to get Wizord the kind of cooperation he had in mind, the panels snap back to orderly rectangles and squares

Browne also employs Wizord’s chevrons the entire time we’re in Hole World, and Hole World is a violent, terrible place. The majority of that story is about Carbunkle (a kind of tiny disease demon) and Botchko (half warthog, half centaur, all barbaric warrior) grotesquely dueling for the right to destroy Earth. It’s a visually cacophonous battle filled with putrid yellow smoke and horrific background characters. That becomes our association with the jagged paneling — it’s no longer just Wizord, but his whole world.