by Mark Mitchell and Michael DeLaney 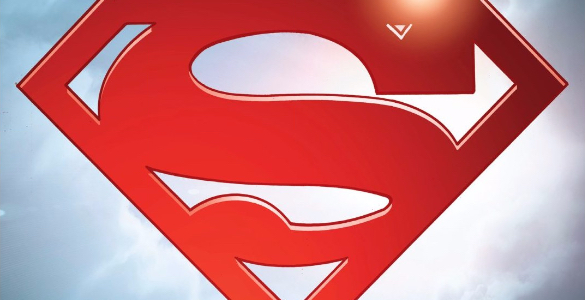 Mark: Modern comic books are built on tropes. After nearly a century of storytelling in the medium, the particulars of what makes a Superman story different from a Batman story are so deeply engrained that creators have a binary choice when sitting down to craft a tale: embrace the tropes or react against them. And while longtime comic book readers tend to seek out and reward stories that are willing to subvert and contort their expectations, either choice can be successful if executed well.

Dan Jurgens’ approach to Superman boils down to all tropes, all the time, and by the measure of meat-and-potatoes Superman, Action Comics 987 accomplishes its goal.

The central conflict of the issue revolves around mankind’s capacity for great evil, and how even the mighty Superman can be brought to his knees in the face of such relentless cruelty. Don’t stop me if you’ve heard this one before, because otherwise there’d be nothing left to talk about. In this incarnation of the familiar story, the shadowy Mr. Oz seems to be bringing out the worst in people around the world. And while the depictions of the various evils are pretty on the nose (at one point a white guy in an American flag bandanna  brandishes a gun and threatens immigrants for taking his job), in a time where literal Nazis are taking to America’s streets I don’t know that more subtlety is necessarily required. The issue’s big reveal is that Mr. Oz purports to be Jor-El, Superman’s father, and he’s encouraging humanity’s worst impulses in an effort to try and convince Superman that the people of Earth don’t deserve him and his power.

Since Action Comic 987 is working with such familiar ideas and storybeats, the success of the issue really comes down to the execution. Jurgens has been writing Superman for almost as long as I’ve been alive, and at this point you’re either into his brand of retro storytelling or you find it dated. Viktor Bogdanovic handles pencils for the issue with Mike Spicer on colors, and they bring a clean, bright look to Superman at his most powerful. There’s something about their styles together that reminds me of Greg Capullo’s work. 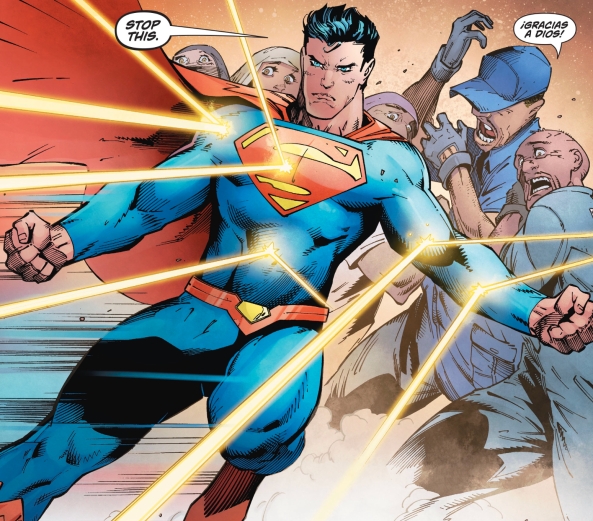 Speaking of Capullo, last month I pretty much excoriated Dark Nights: Metal 1 for what I perceived to be a lack of imagination, but I didn’t hate the issue. Today, I’m writing semi-enthusiastically about an issue of Action Comics that I find essentially stupid, yet ticks all the boxes when it comes to the building blocks of a competent Superman story. But Dark Nnights: Metal 1 was clearly pushing for more, whereas Action Comics 987 contents itself in painting by the numbers. Based on their own amibitions, Action Comics succeeds where Dark Nights: Metal fails, but I have no desire to ever revisit either.

What’d you think, Michael? Does the fact that this is basically a story we’ve seen many times over bother you, or is the familiarity part of its charm? And if I offered to bet you $50 that Jor-El as revealed at the end of this issue is not, in fact, the Jor-El, would you take that bet?

Michael: Oh man Mark, that’s quite the bet you’ve put on the table. I’m thinking that I’ll pass, however. You mentioned the significance of tropes in comics — specifically in Superman and Batman comics — and I can’t help but think about this in light of your bet. Though the particulars may vary now and then, an iconic origin like Superman’s or Batman’s will never truly change. Batman will always be born in the blood of Thomas and Martha Wayne and Superman will always be an alien refugee evacuated by a benevolent father and raised by a humble foster family.

In Grant Morrison’s “Batman R.I.P.” Dr. Simon Hurt claimed to be a Thomas Wayne who faked his death. The real explanation was far more complicated, but needless to say the man was not Papa Wayne. I’m anticipating that Mr. Oz/Jor-El might be the same type of red herring as Hurt. 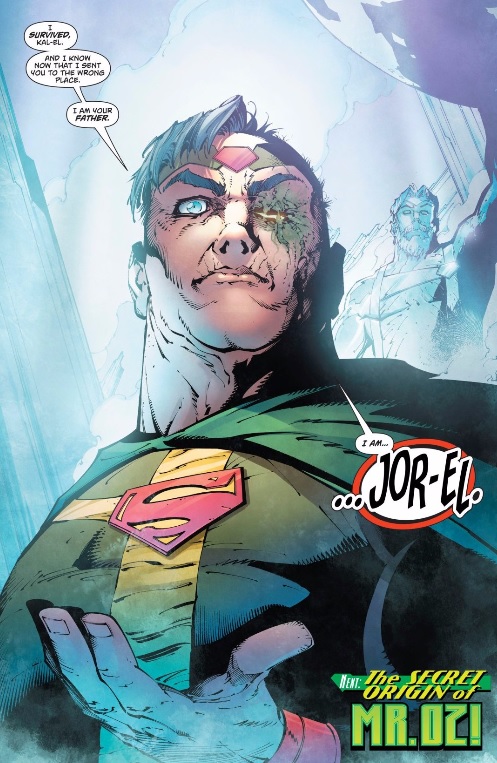 I’m of two minds about this Jor-Oz business. On the one hand, I’m fully expecting DC to play out their typical explain-away of “it was someone from Earth 3” but part of me wants Mr. Oz to be the legitimate Jor-El just to shake things up a bit. Though Dan Jurgens is handling the reveal of Mr. Oz as Jor-El, it’s highly probable that these are all the machinations of Geoff Johns with his upcoming Superman/Watchmen “crossover” Doomsday Clock. After all, Mr. Oz was originally a Johns creation in his short-lived run on Superman way back when.

With that in mind, I find myself thinking of the likes of Alexander Luthor and Superboy Prime in Johns’ Infinite Crisis. Mr. Oz shares the same motivation as the above-mentioned villains: the state of the DCU is despicable and depressing. Like Mark said, Jor-Oz wants to prove to Supes that the cynical, evil world of Earth is one that doesn’t deserve his efforts. This is probably the most surprising piece of the Mr. Oz revelation. While Joe Schuster and Jerry Siegel intended Superman to be an analogue for Moses, he has undoubtedly become the Christ figure that many know him as today — making Jor-El “the Father that sent his only Son to Earth.” In that context, what does it say about Jor-El/God when he no longer believes that the world he sent his son to redeem is worth saving? Lots of interesting potential down the road that I hope Jurgens & Co. explore.

I also got heavy Capullo vibes in Action Comics 987 — I’ve noticed that for the past couple of issues that Viktor Bogdonavic has drawn. Not for nothing, Bogdonavic is working with frequent Capullo inking collaborator Jonathan Glapion. Regardless, I’m happy to see a modern style of comic book art like Bogdonavic’s that still suits the Big Blue Boyscout.

If modern Batman stories are about the deconstruction of The Dark Knight, then modern Superman stories are about The Man of Steel’s relevance. The dawn of the anti-hero made the general population scoff at Superman’s uncomplicated heroism, and we’ve been questioning his place in our world ever since. While we don’t know the particulars of Mr. Oz’s plan, it seems that he also has these lingering questions, albeit from a different perspective. The common naysayer will say that Superman is not cool because he’s not dark and edgy, etc. Mr. Oz shares this point of view from a point of defense — he sees this world as a corrupt failure that doesn’t deserve Superman’s benevolence.

While it might lay it on a little thick, I think that Action Comics 987‘s social commentary is headed in the right direction. Superman’s level-headed morality is a good counter-balance to the numerous displays of hate and intolerance that we are seeing. And like the man said, Dan Jurgens has been working on the character for so long, so who better to guide home along the treacherous path?