You are what you think all day long.

Identity is a frustratingly slippery thing. We all have one, but most of us would be hard pressed to describe what it actually is — what it is that actually makes us who we are. Is it our life experiences? Our relationships? Our interests? The information we absorb? It’s both none of and all of those things (and more). It’s the messiness of that notion that makes characters like Scott Free so compelling; born of New Genesis, raised on Apokolips, he has two families that are now locked in war with one another. The question of who he sides with slips into the messy details of who he is, an issue already strained by the questions he has regarding the very nature of his reality. To extrapolate from Emerson: who are you if you don’t know what to think?

A clear example of that confusion comes in the symbol of the candle — an object Tom King and Mitch Gerads introduce as Granny Goodness is revealing the truth about Orion’s loyalties. Or is it the truth? Scott has every reason to distrust both of these characters, so it’s unclear whether that candle represents the light of truth, or some kind of siren temptation, as if Scott is a moth drawn hopelessly towards his death. Crucially, we don’t quite see the candle go out, even after Big Barda tosses it away after bludgeoning Granny Goodness to death — Granny may be gone, but her words live on.

But for me, the symbol that speaks more to the questions about the very nature of Scott’s world is the shower. In true King fashion, the question is delivered with the nonchalance of a joke:

The mother box says the shower is on, but it clearly isn’t. It’s the kind of interaction with technology that makes anyone question their sanity, but with that seed already planted in Scott’s head, his question of whether the shower really is on — and whether he really is clean — takes on an almost philosophical quality. Maybe the motherbox is better equipped to asses the situation than he is.

Putting a finer point on it, King and Gerads bring in some of Big Barda’s own identity issues, forcing us to consider whether identity truly is what we think, or if there’s some more objective truth that we might seek. 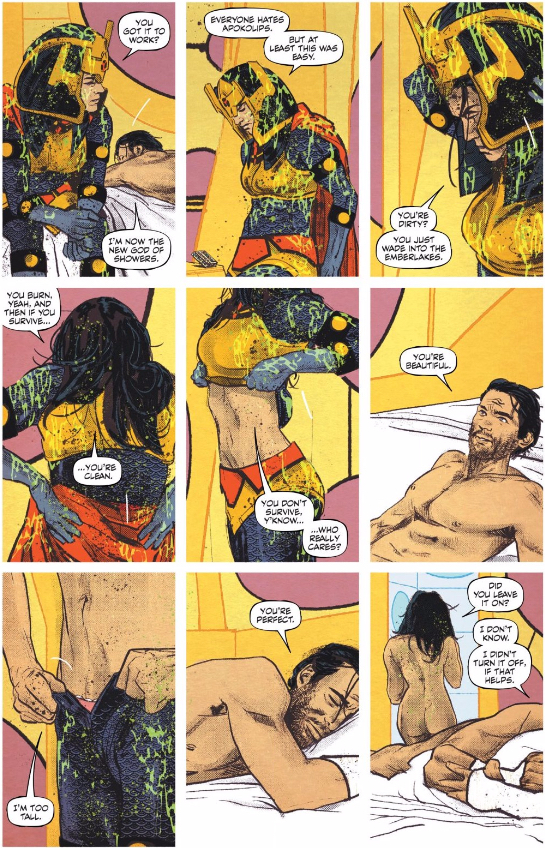 She starts with a story about an external force providing a kind of test of worthiness, but is interrupted when Scott offers an assessment (albeit superficial) of who she is. She refuses it, but he insists, and the issue is dropped entirely as we return to the question of whether or not the shower was ever really on. Is reality properly reflected in either of these characters’ minds?

When the two are first reunited with Granny Goodness, Barda meekly repeats that she’s too tall (which perfectly encapsulates their weird nitpicking mother relationship), but Granny offers the almost compassionate reply that “everyone’s too something.” That is, maybe Barda’s assessment of herself is accurate, but irrelevant. That might be a chilling comfort for Scotts own questions about whether he is even alive, but that intersection illustrates what makes this series so special.

One comment on “The Evasiveness of Identity in Mister Miracle 2”