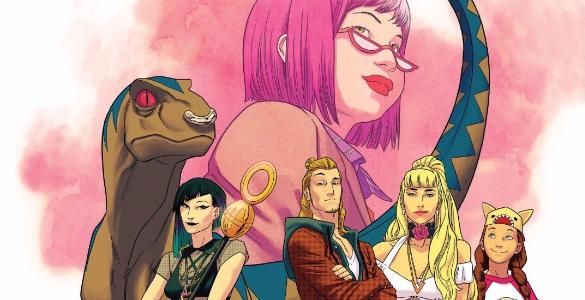 Spencer: Runaways 1 has to be one of the most unusual first issues I’ve ever read, especially for a team book and especially for a book from the Big 2. While I’ve read plenty of good, sometimes even great, first issues, there’s certain objectives most first issues have to achieve — introducing the series’ cast, premise, and villain, for example — that can lead to them all feeling like they’re cut from the same template. Runaways 1, though, shatters that template completely; Rainbow Rowell, Kris Anka, and Matthew Wilson essentially skip to what would probably be issue 4 of any other series, immediately immersing readers deep in a tense, life-or-death scenario. It’s a marvelous decision.

It’s also a decision that makes the creative team’s priorities crystal clear. They waste no time in “resurrecting” Gert, thus taking steps to reassemble the original Runaways line-up (minus Alex Wilder, who was last seen stirring up trouble in Power Man and Iron Fist) as well as the line-up that will be used in the upcoming Runaways live-action television series. Moreover, Rowell and Anka demonstrate their dedication to character and storytelling over convention, a direction that I think will make this series something special.

It’s a smart choice to focus so much of this debut issue on Nico Minoru as well; thanks to A-Force she’s probably the Runaway most clear in many readers’ memories. I haven’t read the original Runaways (something I hope to rectify soon), but I fell in love with Nico’s power-set while reading A-Force, and Rowell clearly understands what’s so compelling about it; Nico can do almost anything, but only once. 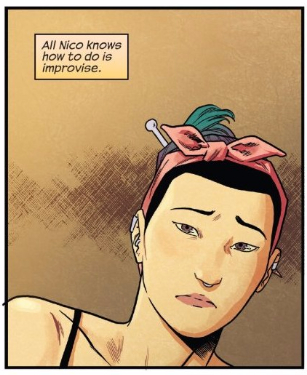 Nico’s abilities rely on improvisation — on remembering what spells she hasn’t used yet and finding work-arounds on the fly for the ones she has (the focus on improvisation being their defining trait echoes the cast being teenagers and reactive runaways as well). It takes a massive amount of creativity to write that kind of character, and Rowell proves herself more than capable. It also leads to tense situations — what can Nico do? What can’t she do? It’s a perfect blueprint for drama; there’s more than a few missteps on Nico’s path to fixing Gert, and each one becomes more frustrating, more heartbreaking than the last.

In that same vein, Rowell also succeeds by finding the pathos in Nico’s abilities.

In many ways Nico is becoming less powerful as times goes on, with many of her most obvious and powerful spells already used up by this point. There was a time when Nico could have healed Gert in a word, but now it takes her 12 different spells to do it. It has to be a frustrating situation for Nico even before you factor in the possibility that one of her closest friends could die because she’d already used up her more powerful spells. That frustration makes Nico compelling and sympathetic, and makes me root for even when I personally don’t have much invested in Gert yet.

That same frustration is reflected in Chase as well. Both Nico and Chase just want to help somebody they love, but neither the dwindling magician nor the bumbling time-traveler have the control they want over the situation, and their fear and frustration leads them to bicker and lash out at each other. I admit that their arguments probably have more significance for long-time Runaways fans — some cursory research shows that there was a bit of a Nico/Chase/Gert love triangle going on at one point, which no doubt creates some subtext to this issue that’s going over my head — but even to a newbie, this issue has clear and compelling stakes, interesting character work, and wonderfully creative plotting and ability use. It really is a slam dunk.

I also think that Rowell and Anka do an impressive job balancing reintroducing the Runaways with telling the issue’s story. The creative team doesn’t go into depth about any individual facet of their characters’ or their backstory, but gives newcomers just enough information to understand the situation and the characters’ motivations. 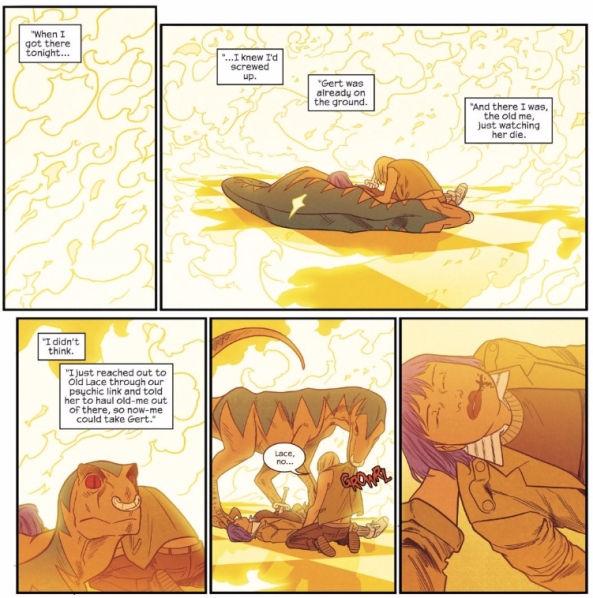 Take Chase’s rescue of Gert, for example. We aren’t told the exact story of how she got stabbed nor of how Chase got a time machine, but we understand that she’s only got moments left, and that Chase is inexperienced and desperate. Newcomers might not understand exactly who Old Lace is, but Rowell lets us know that Chase can control this dinosaur somehow. In every new situation the creative team provides just enough information to keep all readers on equal ground and draw them into the story, relying on the natural drama of the story to do the rest of the work.

I’d say they succeeded in that respect: it’s only one issue, but I’m hooked on this book. Taylor, what about you? Did you get as much out of this issue as I did? Is there anything you wanted to bring out about Anka’s art or Wilson’s colors? And hey, how did Chase’s time machine even fit in Nico’s apartment? Did it just crush her bed?

Taylor: Great question! The time machine only appears in one panel but after that it is mysteriously absent from all subsequent panels. My best guess is that the machine appears only briefly when in use and otherwise hangs out in a bubble outside of time awaiting Chase’s next instructions. How else would you explain it being gone? As for Nico’s bed? That thing’s totally history.

In terms of the story itself, I was also pleasantly surprised to see Rowell ditch the usual first team issue format in exchange for something much more interesting. The funny thing is that Rowell tricked me at the beginning into thinking she would introduce all the team members given that she spends a couple panels discussing Nico’s abilities. However, this way the introduction is worked seamlessly into the suspenseful plot rather than the other way around.

Here, the fact that Nico can only cast a spell once isn’t just an interesting tidbit about her character. Instead, her inability to cast a generic healing spell makes for the primary conflict in the plot. The suspense in this issue is all built around wondering if Nico will be able to come up with new enough spells in time to save Gert. This at once makes for a great and entertaining first issue and shows us some important aspects of Nico’s character.

On her character, the thing I like the most about Nico is her ability to essentially trick her magic staff into doing her bidding by being clever. In order to save Gert, Nico has the staff transport a doctor to her apartment. Once Gert is safe and the doctor is no longer required, Nico needs to send her home but can’t use a simple “return” spell. This being the case, she improvises.

Invoking the name of Dorthy Gale, Niko casts a spell to return the doctor from whence she came. This little detail shows just how clever Nico has to be in order to use her staff effectively. I can only infer that Nico has already used the phrase “there’s no place like home” to return someone from where they originally came, so instead she settles for Dorothy’s name to get the job done. This is a clever ploy on Nico’s part and it’s fun seeing her use her improvisation skills to get the job done.

Rowell does a great job writing an entertaining first issue, and Kris Anka deserves credit for rendering this story in such a clear way. Anka deserves praise both for his clean lines and panel layouts in this issue which make it easy to read. There’s several pages which demonstrate this, but page 14 exemplifies what I’m talking about to a T. 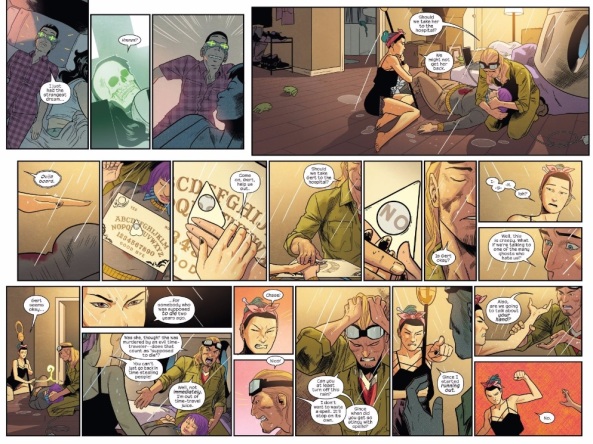 This layout has 21 panels, but it certainly doesn’t feel or look like it. One reason this is the case is that Anka doesn’t feel tied to any particular panel size and effortlessly switches sizes throughout this sequence. Some panels are but a sliver showing Nico’s eyes while others take up a third of a page showing three characters all at once. This flexibility goes a long way toward making this a clean page. Anka also employs very clean lines in his artwork and that works to this issue’s benefit. Notice how even the smallest panels featuring only Nico and Chase’s faces are still detailed and easy to understand. That’s possible because Anka has put in the time to pick and choose what lines go where, without any unnecessary marks. Paired with the paneling, Anka’s skill with the pencil makes for a easy, enjoyable read.

Really, that can be said for the issue as a whole. Having never read the Runaways before or even knowing anything about them previous to this issue, I find I understand their world, some of their group dynamics, and most importantly, why I should care about these people. As long as this keeps up, this is a series that will enjoy runaway success.