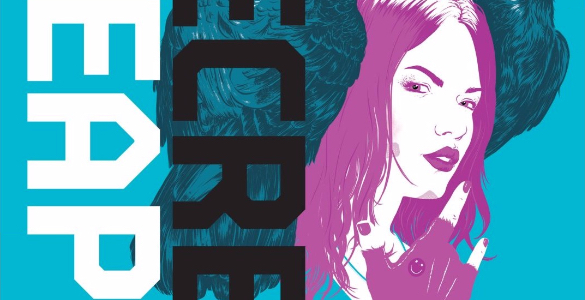 “There. There it is: too much iron in your blood…”

Patrick: Magneto controls magnetic fields. It’s an objectively cool super power, impossibly useful in every situation (and particularly useful against any otherwise unkillable enemy). In X2, Magneto uses this power rip microscopic particles of iron out of his prison guard’s bloodstream. He manipulates the magnetic fields around the resultant bloody cloud until he’s in control of free-flying bullets and hovering platforms. It’s an absurd demonstration of Magneto’s powers. There’s a lot to criticize in the logic of that scene, but it’s hard to fault the giddy enthusiasm. Writer Eric Heisserer and artists Raúl Allén and Patricia Martín show a similar enthusiasm for their characters’ powers. The difference is that they start from a ridiculous premise and work their way to exciting applications.

That’d be reason enough to love the conclusion of Secret Weapons, but Heisserer, Allén and Martín hold the comic book medium in the same high esteem as the goofy powers their characters posses. Just as Avi, Nikki and Owen apply their simple skills in ingenious ways, so too does the creative team master the page with mindblowingly intuitive art.

Right from the jump, Allén and Martín establish  a simple pattern with their paneling that speaks volumes about their story in just a few images. Each of the first two pages starts with a character-less panel that communications the tone of the environment rather than the actual setting. The second panel shows both the subject and the object of the scene — one reflected in the glasses of the other. The third panel loops back around to show the setting clearly. Here are those pages in context: 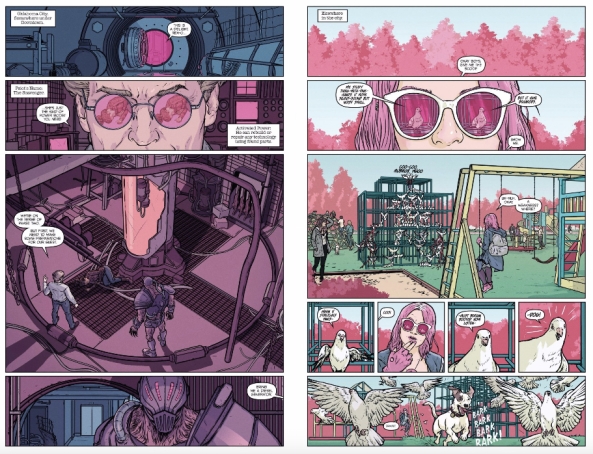 The visual parallels of these adjacent pages are immediately obvious, and it’s interesting to note where Nikki’s page deviates. She’s got a collaborative dialogue going with these pigeons, which not only shows that she’s a more social creature, but it physically breaks up the panel rhythm established on the previous page. We may not need to be reminded that our heroes are better than our villains, but I love this demonstration that Nikki is more aware of the object of her scene — the pigeons — than Scavenger is of the object in his scene — Livewire. The reflections in their sunglasses make little mini-panels, but Nikki’s the only one doing the close reading.

And that close reading pays off. Nikki’s birds have useful intel, even if it doesn’t initially seem like it. Last issue, Statler (a crow) revealed that “El Vato” could take them to Scavenger’s lab. That’s a fun little mini-mystery, right? A crow using the Spanish word for cow? It’s not an auditory clue, but a visual one. Statler has been reading a busted neon sign that is supposed to read “ELEVATOR.” 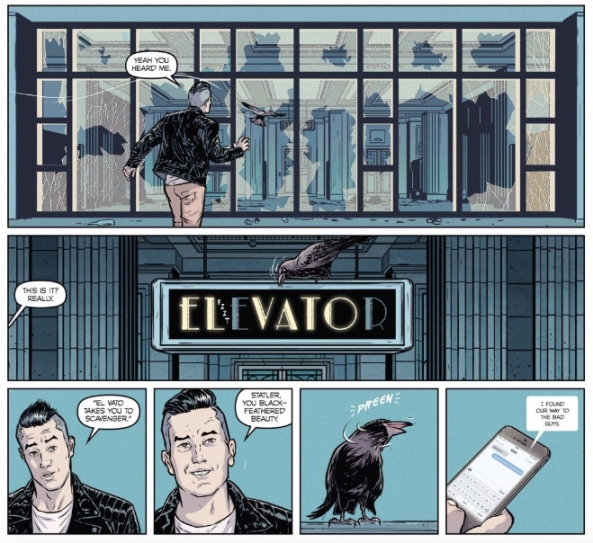 This is a great gag, even if it does push up against the bounds of what we could believe. The crow’s obviously not actually speaking English, but some kind of bird language Nikki is able to understand. It’s hard to believe that the bird reads two words in Spanish, then says them in his bird language in way that communicates “El Vato” to the Enlglish-speaking Nikki. The joke works, however, precisely because we only engage with these characters through a purely visual medium. EL VATO = ELVATO literally only works when you’re reading it.

It is at about this point in the issue when Allén and Martín start to populate the world with diegetic panelling — giving the appearance of the comic book page within the reality of the story they’re telling. You can see panels in the busted out windows of the apartment building or between the bars of the fence keeping Owen out. The medium and the story are gradually merging into the same thing.

In fact, Owen scores another win by close-reading the world.

All of this mastery of the medium comes before the final showdown, wherein our heroes pull out the stops and use their powers in impressive ways to tear down their foes. That’s not a knock against the fight — it’s genuinely thrilling to watch Avi immobilize Rex-0 with his statue-powers while Owen pops heavy objects into the air above Rex-0’s head. Heisserer drives Livewire’s powers to the extreme, as she is able to piece together a gun from tiny pieces of technology Scavenger overlooked in his own lab. It’s a moment not totally dissimilar to Magneto’s “too much iron” moment. But even that comes from Amanda’s ability to pay attention and gather all the resources available to her. Moreover, Scavenger is being punished for not noticing all of Livewire’s resources — remember when I mentioned that Nikki was more aware of what she was reflected in her glasses on page 2? 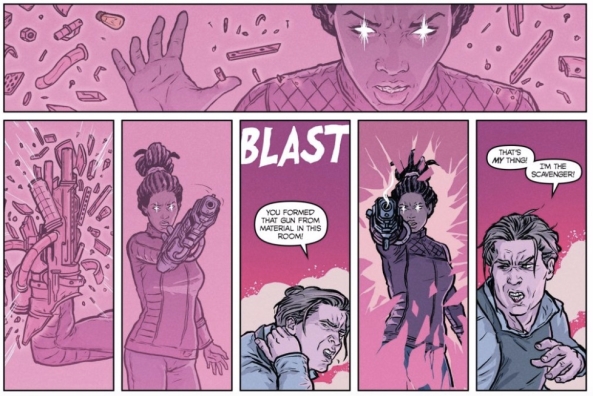 The result is that Secret Weapons is an expression of expertise from the inside out — the characters and the creators sharing their successes together.

Drew, I loved this issue, and this whole mini-series. Neither the villain (a power stealing vampire-esque baddie) nor the moral (we are stronger together than alone), but the craft on display is just so fucking strong. A well told story is just a well told story. The back-matter teases that Nikki will be back in Secret Weapons 0, but I’m not convinced the character herself holds any sway for me to come back. Lemme see those credits, then we’ll talk about coming back.

Drew: It’s interesting — if you had asked me which character I’d most like to see more of after the first issue, it would have been Nikki, hands down. She was able to use clouds of birds to distract Rex-0 and give her leaps a bit more lift, all while she was flipping around like a circus acrobat. She was at least badass enough to escape Rex-0 (which is more than we can say about poor Martin, whose abilities crop back up in this issue as the Scavenger hopes to get under Livewire’s skin), which made her a thrill to watch.

Since then, though, I’d say pretty much all of the other characters stole the show. Or maybe it’s just that the other characters get more satisfying arcs. When we first met Owen, he was fired from his job because his conjuring abilities were such a nuisance, but here, he’s summoning usefully heavy objects just over Rex-0’s head as a means to effectively immobilize him. That’s positive growth for the character. Meanwhile, Nikki starts out the series as a skilled gymnast with a network of birds feeding her information. All of that comes in handy throughout the series, but her getting sidelined almost immediately in the big boss fight frustrates her arc a bit. Moreover, it seems to undermine her self-confidence. 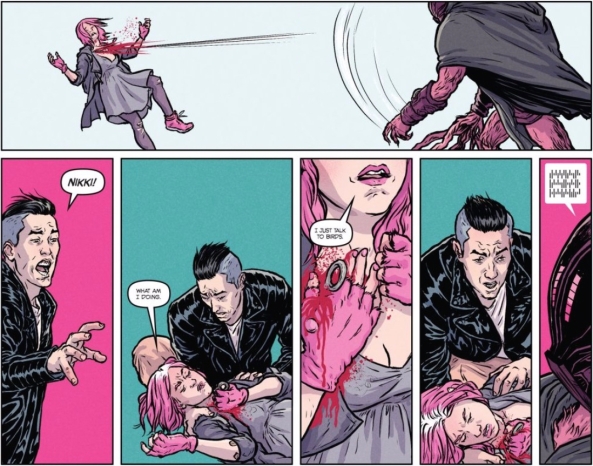 I’d quibble about “I just talk to birds” being a bit of an understatement, but the important thing is that her abilities haven’t diminished — she’s every bit as capable as she was in the first issue, when she was flipping and jumping around like a goddamned ninja. So this crisis of confidence beat doesn’t feel totally right for her. Maybe her baddassery is precisely why Heisserer choses to bench her for this fight, but it definitely left me wanting more from this character.

Where Owen and Nikki’s arcs meet also caught me totally by surprise. In hindsight, I can see the creative team seeding this budding romance, but I’m not sure they’ve given us enough time with Owen to really get a sense of his connection with Nikki. It feels a bit perfunctory right now, but it may simply be that we’re in the early stages, yet. Nikki seems as unaware as I was throughout the scene, and Allén and Martín’s paneling reminds us that, while this relationship may turn into love, it’s still decidedly jagged and rough-hewn at this point. 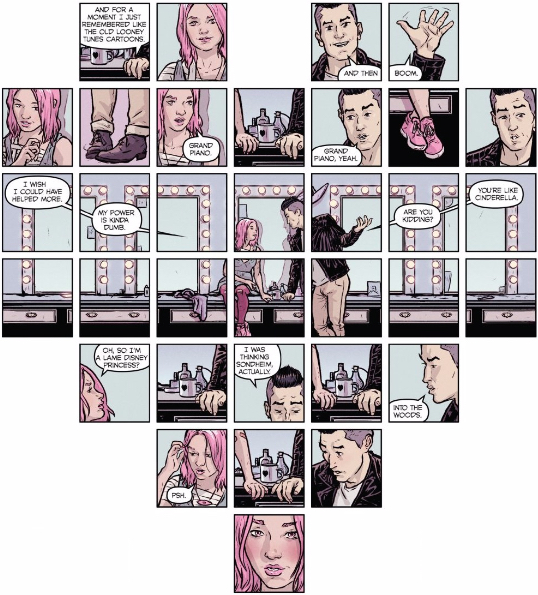 Whatever issues I have with their romance, I can’t find fault in this layout. Allén and Martín divide it roughly in half, embracing that negative space in the first row of panels to show the distance between these characters — space that is shared by the two of them in subsequent rows. Allén and Martín are particularly clever in what they show in each panel, but the effect is best understood as a whole, as the mood of the scene is reflected in the heart shape of the layout.

Which maybe captures my thoughts on this issue perfectly: as a whole — and especially visually — this issue works beautifully, but the moment-to-moment beats aren’t quite as satisfying. It’s a solid conclusion to this series as a whole, even if certain individual arcs didn’t always connect.