Taylor: When I was in college, I was a man of strong convictions. I may not necessarily have acted on these convictions, like a true American, but I at least had ideals that I believed and on which I was unwilling to compromise. Now that I’m older and have experienced the real world, my convictions aren’t nearly as strong as they once were. This isn’t to say I don’t believe in them anymore, but I recognize the need to make certain sacrifices and compromises for the things I truly believe in. It’s a hard lesson, but one Kamala Khan learns when she meets a young Ms. Marvel, and one that I can appreciate now that I’m a bit older.

As with all of the Generations issues, Ms. Marvel and Ms. Marvel gives little pretext before plunging the modern day Ms. Marvel into the past. While we now know that Kobik is behind the time travel, Kamala is still in the dark. Her reaction to being sucked back in time is hilarious because she accepts it just as part of the weird shit a super hero has to put up with.

This tongue in cheek response has G. Willow Wilson’s fingerprints all over it in the best way possible. Wilson has always written with a playful self-awareness and that tone is perfect for a one-off crossover issue such as Generations. That we are told by Kamala that she is being sucked into a time portal for “sci-fi reasons” is perfectly executed meta-humor that manages to poke fun at the ludicrous nature of the events in this issue while also still acknowledging them as an important part of the plot.

Willow’s humor is but one reason why this issue is successful. Another is the way Willow incorporates what’s happening in the primary Ms. Marvel series into this issue. Those who are fans of the series (which I assume is everyone reading this issue) know that Kamala and Carol Danvers are kind of on the outs right now — their differences in how to administer justice being the primary hitch in their relationship. That plays into this issue even though Kamala and Carol of the past get along.

For example, after Carol and Kamala defeat a Shi’rar agent, Nightscream, for the first time, Kamala reflects on why Carol is a superhero and why she fights evil. 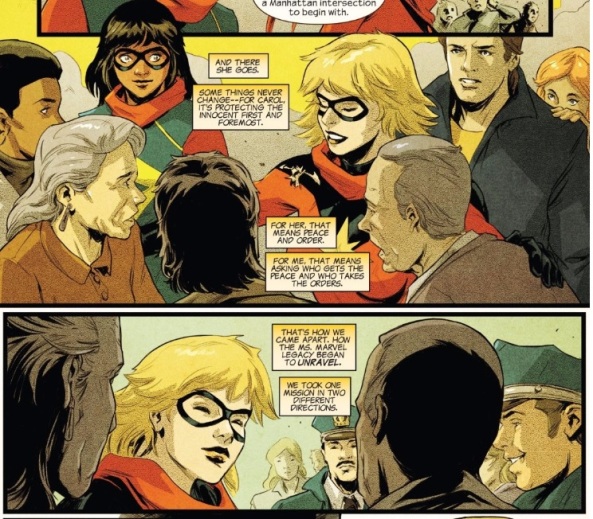 Their different beliefs basically comes down to one questions: what cost are we willing to pay for peace? For Carol, she believes that peace is the ultimate end that any means justify the ends. Kamala isn’t so straight forward in her views, however. Kamala questions what the point of peace is if only some get it and it’s dictated by a select few. Just as in the Generations issue centered on the Thors, we see that Wilson is compelled incorporate material from her ongoing series into this one. Ultimately this is a smart move as this moment acts as the climax of the issue, where Kamala realizes that to rekindle her relationship with Carol, she might need to compromise some of her values. This doesn’t mean she will give them up. Rather, she learns that sometimes it’s important to find a middle ground with those whose beliefs differ from her own.

Kamala’s realization also helps her pen an article for Carol’s Women’s Magazine which saves it from being bought by the Shi’rar (in a bid to control human media). This magazine, and Carol’s struggle to keep it afloat, highlight another strong aspect of this issue. Wilson is sure to remind us that in the 1970s, life was still very difficult for women. Carol, who wants to cover important issues on feminism, struggles with a world that is at once hostile and apathetic to what she has to say.

After a hard battle, Carol is despondent about the future of her magazine, feeling that sometimes the struggle to save humanity and liberate women is impossible because people simply don’t want to accept either scenario. Just as in Ms. Marvel, Wilson is tackling social issues, with the difference here being that she is focusing on issues of gender rather than race. Similarly, like Wilson’s primary series, this social issue woven perfectly into the plot so it serves both as a parable and a plot device. In this case, Wilson highlights the injustice women have faced and which they are still fighting today. At the same time, the issue of saving Carol’s magazine acts as the resolution of the plot of the issue, since Kamala is able to save it by writing a story that blends feminism with more traditionally feminine stories.

In all, this Generations issue is just another example of Wilson’s masterful writing and I enjoyed it greatly. How did you feel about it Ryan? Did you like Ian Herring’s 70s coloring tint? Or Paolo Villanelli’s art? Do you think Kamala will return to her own time period and make amends with Carol? Lastly, isn’t Nightscream great? She’s hilariously evil and devoted to her mission. I hope we see more of here somehow — do you?

Ryan M: Yes. With Nightscream, Wilson gives us an over the top enemy with fairly understandable goals and almost mundane tactics. This issue was great! The coloring and retro art reminded me of reading my mother’s old romance comics when I was a kid, but obviously was more fun because instead of jerk boyfriends, the enemy came in the form of a “bird-hybrid super villain” and the underlying theme is the conflict between second and third wave feminism.

Wilson underlines the generational difference between Ms. Marvels in that first meeting. Kamala cannot help but admire Carol and Wilson puts it in the context of Carol’s role in the Women’s movement.

Kamala credits Carol, and women of her time, for pushing the world forward, but Wilson also presents Carol’s own limitations when Carol describes the options for the magazine. The dichotomy that Carol presents is a product of her times. When women had to fight to be in the workforce, their desires were more likely to be treated as a binary. You could care about politics or you could care about makeup. You could have a career or you could be feminine. Later generations recognize that this is an unnecessary choice or, as Kamala puts it, women care about both protesting stuff and unicorns. This inter-generational difference rang true for me. My own mother used to worry about my feminist cred because I like Doris Day movies and sewing dresses. As someone who had to protest to be able to wear pants to school, she didn’t understand why my taste would run retro to a time before women had choices.

Using this conflict as a backdrop to the issue is a great way for us to understand how Carol and Kamala can share a cause and a legacy but have such different perspectives. There is a generational schism inherent to their relationship and Wilson presents this as an opportunity for Kamala to gain a fresh perspective on her hero.

Even out of costume and facing the failure of her magazine, Carol is a commanding figure in every panel. Villanelli is able to show us Carol as career woman without undercutting any of the power that she displays in modern times. She is a commanding presence even in magazine editor mode, a mixture of chic and powerful. Villanelli places Carol above everyone else from the first panel of the issue. As she calls a meeting to order, she is shown in a low angle, her form looming over the shadowy back of one of her subordinates. 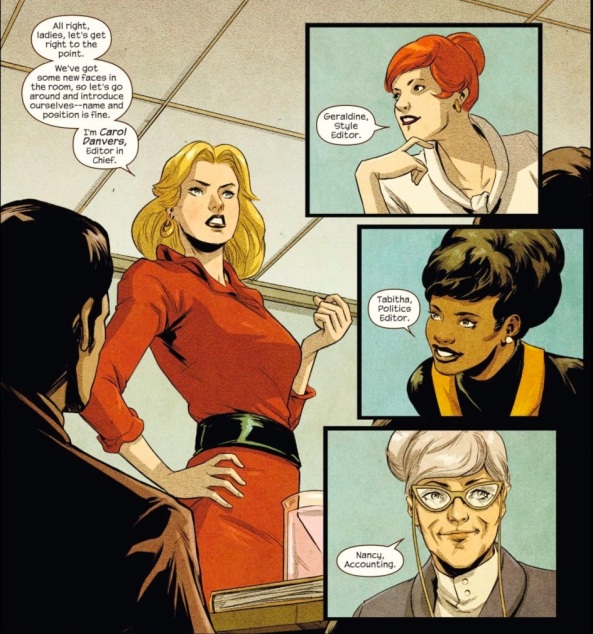 It’s a great introduction to this version of the character. It’s a small note, but I also love that, while a man is clearly sitting in right in front of her, she addresses the room as “ladies.” She is on a mission and working closely with her female staff, which includes women of different ages and races. The issue reinforces the idea of Carol as a heroic figure while also giving Kamala room to find her own success. I hope that some of this experience can help Kamala once the sci-fi reasons are gone.