What would it take for Bloodshot to settle down? Easy answer, right? Wife and kids. Classic motivators for a cowboy to hang up his boots. We’ve all read enough genre fiction to know what happens next: the quiet of the Bloodshot/Magic Jessie household is violently shattered, sending the hero on a revenge rampage. Hold the phone — writer Jeff Lemire is flipping that trope on his head, instead killing off Bloodshot and making Magic and her daughter the heroes of our story.

Lemire and his artistic partners Lewis LaRosa and Mico Suayan seemingly start the issue with this truth in place, but do a pretty good job disguising it. The first couple pages are a flashfoward to Jessica and Magic fending off some Project Omen goons on their own, with Magic closing out the scene with the ominous note that Bloodshot is “never coming back.” There’s still some ambiguity there — perhaps he’s globe-trotting in the name of revenge? When we cut back to the the “present day” after the title page, the story normalizes a little bit, re-centering on Bloodshot as the protagonist. He’s got the most panel-time, he’s driving the voice over, even the baby’s clothes are singularly focused on who dad is. 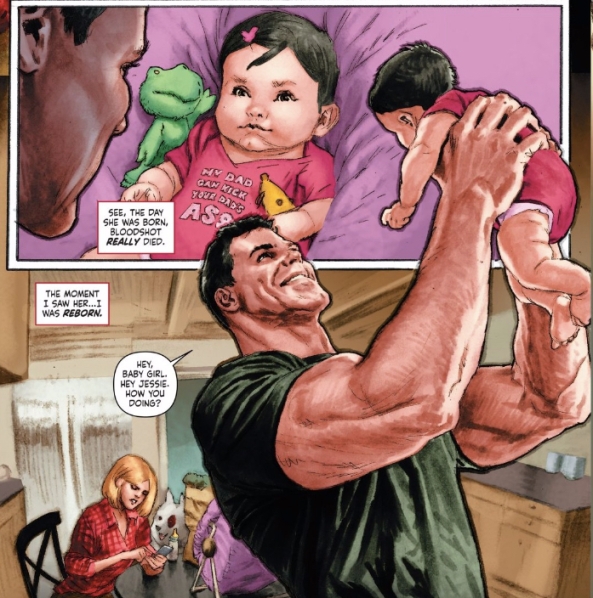 The mid-issue flash to the bad guy exposition further emphasizes the themes of fatherhood as the Scarred Man attempts to nurse a newborn calf back to health. He says he’s been at it for hours, so he must be emotionally invested in it, but the second he gets the opportunity to re-energize omen, he shoots the calf in the head. There’s a clear and obvious dichotomy between the lives of Bloodshot, the Scarred Man and everyone connected to Omen, and the lives of fathers. They’re just not compatible.

That is, perhaps, trite. See my earlier dismissive comments about the cowboy hanging up his boots. Where Lemire, LaRosa, and Suayan distinguish their story is in who survives to tell it. In the final pages, we’re back in the ambiguously-labeled future: “Soon.” Magic confirms that Bloodshot is dead, and the burden of saving his family falls on the family itself. We don’t really spend enough time in this future to know if that’s what is actually happening (i.e., Bloodshot could just be missing, presumed dead), but I love the idea of turning this particular trope inside out. The supertitle “Soon” gives me hope that Lemire and company are telling a story that aspires to be more than a retread of countless revenge narratives.