As much as Lazarus has shown us a dark vision of a future dystopia, it’s largely shown it to us from the point of view of that world’s most wealthy and privileged members. Introduced in the second arc, the Barret family allowed writer Greg Rucka to give readers a glimpse of the world from the point of view of its most unfortunate and downtrodden instead. As the series progressed, Michael and Casey have become more integrated with the world’s elite, but parents Joe and Bobbie Barret still provide that more grounded P.O.V., even as serfs. As Lazarus X+66 3 reminds us, the pain of the past can’t, and shouldn’t, be so easily forgotten.

Rucka, co-writer Neal Bailey, and artist Justin Greenwood take their time easing readers into Joe and Bobbie’s new lives. At first they seem to be defined by loneliness — Michael, Casey, even Casey’s grandfather are gone most of the time — but soon we see that it’s the microagressions they face all day, the privilege and arrogance of the serfs who have never been waste, that troubles them most. Even with a life that provides them every comfort they could ask for, they can’t forget what they lost to achieve it. 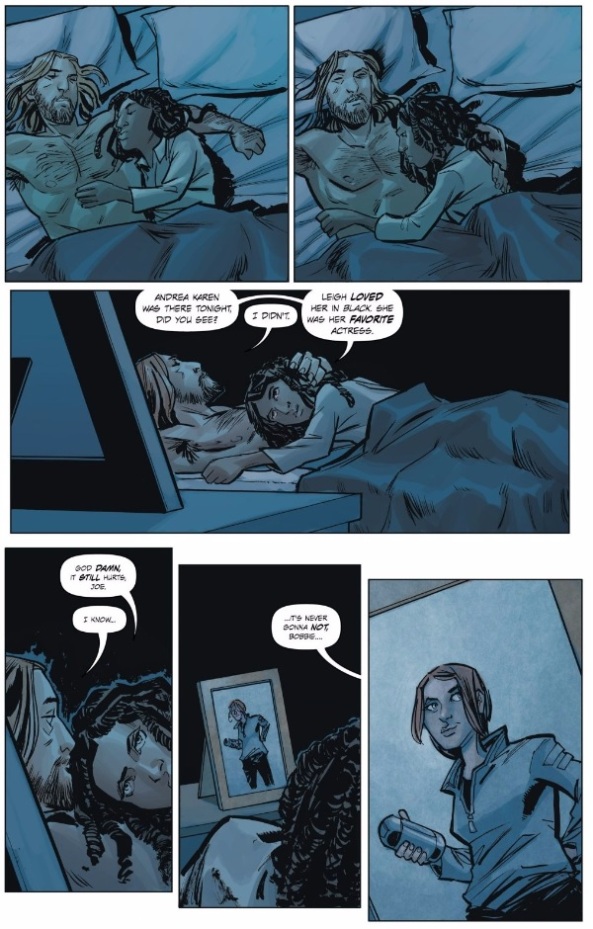 Nor should they. As Joe and Bobbie’s new friends, Ben and Rebecca West, point out, the family could easily make everyone‘s lives better if they so desired, but instead leave most people to rot unless they can specifically help the family. The lifelong serfs are too privileged to see the disparity there, too comfortable with their lives of comfort and mindless entertainment to understand the problems that plague the world and their part in perpetuating them. If that sounds uncomfortably close to the world we actually live in, well, it should.

Joe and Bobbi, though, have been waste, and know that the world’s institutions aren’t fair, and that even life as a serf isn’t a life that’s truly free. I was struck by the moment when Joe finally speaks out. As minor and silly as his gripe ultimately is, the book still treats it like a big deal, as a risk that could cost Joe his life.

Greenwood and the rest of the creative team go to great lengths to direct the reader’s attention to the open window, which Joe very deliberately shuts before he dare speaks out. He knows what could happen if even his very minor complaint was overheard. It’s a classic sign that they’re living in a fascist regime, and unlike lifelong serfs or even Casey’s grandfather, Joe and Bobbie can no longer turn a blind eye to it. At one time they thought their mission was to create a better life for their kids, but it turns out that their real mission is to make the world a place where a family would never have to sacrifice one child to save another ever again.