by Patrick Ehlers and Ryan Mogge

Patrick: One of the harsher truths of Secret Empire is that America was always run on an engine of hatred and fear. Racism, sexism, classism, fascism — neither Hydra Cap nor Donald Trump invented these things. They didn’t even popularize or legitimize them, they’re simply high profile embodiments thereof. It is increasingly easy to read the totality of American history as ugly and hateful, filled with crass opportunists, liars, and mass murderers. That can make the USA a hard hero to root for. With Generations Sam Wilson Captain America & Steve Rogers Captain America 1, writer Nick Spencer goes back in time, giving both Sam Wilson and his readers a lifetime to reconsider the value in fighting for what may, at times, appear to be a lost cause.

I’ll be the first to raise my hand and admit that I needed something of an unambiguously happy ending to the Hydra Cap story, and thank goodness we got such a thoughtful version of that here. Perhaps “ending” isn’t totally accurate: between Secret Empire 10 and Secret Empire: Omega 1 the series has already definitively ended. But with Marvel Legacy incoming, the emotional slate needs clearing in a holistic way. Smartly, Spencer focuses almost exclusively on Sam Wilson, sending him back in time to the moment of the original Captain America’s inception, and making him live an entire life.

And Sam, proving his mettle once and for all, lives one hell of a virtuous life. Sam tries to keep a low profile, afraid of messing up the time steam, but that lasts for all of a page before he enlists in the army. Spencer artist Paul Renaud hit the poetry of 194os America hard, and play it pretty straight to boot.

There’s no Hydra here. No Red Skull, no Baron Zemo. Sam’s narration says “I was history unfold in front of my eyes.” That’s the history of the character’s world, but (to this point in the issue) it is also the history of our world. That means Hitler, Nazis, a Swastika. Once we actually get to the theatre of war, Spencer and Renaud lean more into the fantasy of World War II in the Marvel Universe, but steering away from the villainous side of things. We don’t ever see the telltale skull and tentacles of Hydra, but we do get the Invaders kicking ass together.

For his part in the fantasy, Sam soars above the battlefield in some kind of wholly anachronistic winged jetpack. It’s all part of the useful fantasy about the greatest generation. And because Sam’s an old pro at this kind of thing before he ever got bounced back to the 40s, he gets to act as an inspirational figure for a young, queasy Steve Rogers. During their conversation, Steve says words that should true to anyone attempting to do anything difficult:

“I just — I don’t want to let anyone down. They want me to be this symbol, something that gives everyone hope. I’m trying, but so far it just feels like I’m faking it.”

Steve’s wrestling with the idea that he has to be this paragon of American virtue, and of course he’ll have to fake that. Sam then says the magic words which help define Steve’s MO going forward and which dictate the rest of this issue. “You’re gonna lead these men to victory. And then another victory. And another.” Sam is focused on the process, trusting that the results can only flow from that.

And that’s exactly what we see from the remainder of the issue. Sam goes home and serves as a pastor in a church, raises a family, marches, demonstrates and goes to jail for civil rights. There’s this pervasive sense of inevitability to all of it, and Sam never fails to involve himself in any of it. Even when Cap comes out of the ice, he positions himself as a spiritual and moral advisor to Steve Rogers. The rest of his life plays out as you would expect… at least, if you’ve been reading Captain America for the last couple decades.

Someday, that panel of Tony blasting Steve’s shield at pointblank range will stop being so powerful, but it’s not today.

Sam get older and the whole “vanishing point” portion of this story ends with him getting into bed, presumably to die. Did he fix everything in his long, hard life? No. But he fought to make things better, and that has to be enough. Every victory is another step in the march of progress, and no one lives to see where that march ends.

That segues into Sam handing the role of Cap back to the never-Hydra’d Steve Rogers. Ryan, I think that’s where the metaphor starts to cut the most deeply. Sam has sacrificed and fought as a symbol of American exceptionalism for a life-time and a half, and kicking the shield back to Steve feels like a call to arms, doesn’t it? The generations before us already made their sacrifices, and anything that is better now is because of them. Comics, like history, will always barrel forward. Are you ready to see Steve behind the shield again? Are you ready to see Sam move on? You think anyone else — besides Thor, who seems to be able to sense it — has any idea that Sam experienced like 70 years all at once? Also, will someone tell Miles to get the hell of the table?

YOU’RE AT A RESTAURANT SHOW SOME RESPECT.

Ryan M: Cut Miles some slack, Patrick, he is just trying to get the server’s attention since it’s been a while since her last table touch and empty waters are no one’s friend.

Slacking waitress aside, the diner scene functions as a transition between Sam’s interrogation scene and the gift he offers Steve at the end of the issue. The no-look catch of the shield is pretty badass, but the sentiment in Sam’s note is what drives the power of the moment. It’s time for Steve to return to his role and for Sam to identify his own.

The seventy years that Sam spent as Paul Jeffries allowed him to live a combination of the worlds that he had experienced. He is a soldier, a pastor like the men in his family, a father and grandfather and Captain America’s confidante. He does all of this because of the “pull” that Spencer uses as a refrain in Sam’s story. The pull is who Sam is and it exists outside of time period, politics or what outfit Sam is wearing. It’s intrinsic to him.

The first time Spencer writes of the pull, it’s connecting Sam to Harlem. Later, the pull brings Sam to the ministry and into the Civil Rights Movement.

Spencer and Renaud build to the moment perfectly. The page before begins with Sam calling Cap his best friend over an image of the ice. Then Captain America surrounded by the Avengers, looking first disoriented and then ready to fight. Finally, he is walking through the streets of New York at a parade in his honor. Each of these panels focuses on very familiar images of Captain America, but it’s Steve Rogers who notices his old friend Phil in the crowd. 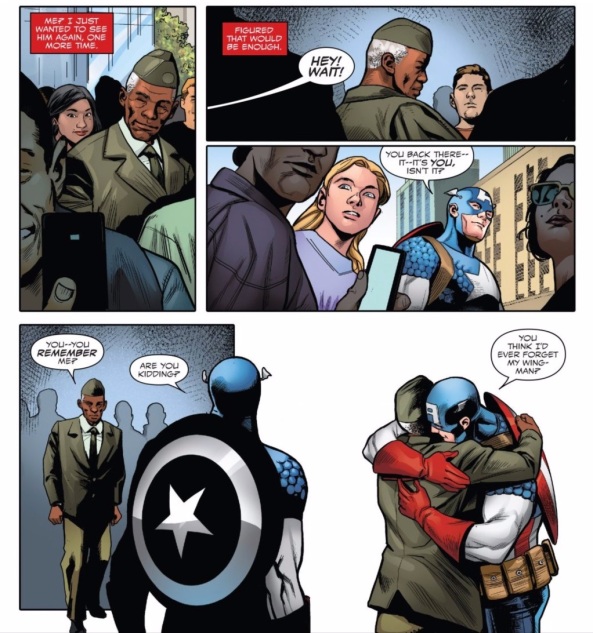 Sam is there to see his brother in arms and best friend through two lifetimes again.

The upper left panel above is where I started tearing up. Renaud places Sam among a sea of people who only know the image and not the man. When Spencer writes that this visit is to see Steve “one more time” we are reminded that Sam is now in the twilight of his life. He isn’t part of the super-club and so the acts that he has done in his seventy years will have to be enough. Thus the turn, both of the plot and of Sam’s shoulder to the crowd, makes it all the sweeter when Steve does recognize him. Their embrace begins another chapter of their friendship.

The dynamic here, where Sam can counsel Steve with two lifetimes of experience, is what makes me most encouraged about Sam’s role in this story form here on. He is no longer carrying the shield, but the shield was never the source of his righteousness. He is more than that. It’s not clear yet why Kobik made the choices that she did, but in Sam’s case, she gave him a chance to live a heroic life as his own man, separate from the super hero world.