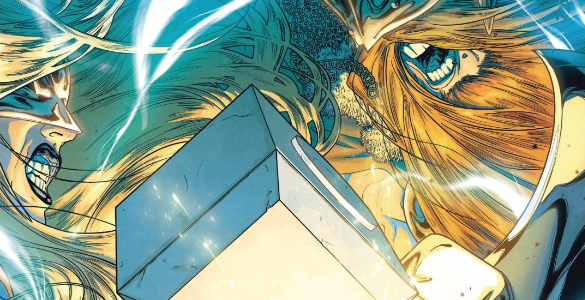 Late in The Mighty Thor 23, as Thor and the War Thor clash over the fate of Svartalfheim, Thor yells that they “have to behave like gods!” I have to wonder what gods she’s been hanging around to make that statement, because almost all of the gods Jason Aaron has presented us throughout his Thor epic have been reckless and arrogant at best, and downright sociopathic at worst. Throughout this issue, Aaron and artist Valerio Schiti seem to be arguing that godhood is more of a weakness than a strength.

Or perhaps they’re specifically arguing that being a Thor is more of a weakness than a strength? After all, Volstagg was one of the better gods, but his anguish allowed the Ultimate Mjolnir to override his better judgment and transform him into the vengeful War Thor. Odinson gets to spend a page stammering at Roz Solomon, his unending feelings of unworthiness likely wrecking whatever fledgling spark they once had. And Thor’s victory ultimately comes from dropping her hammer, not picking it up. 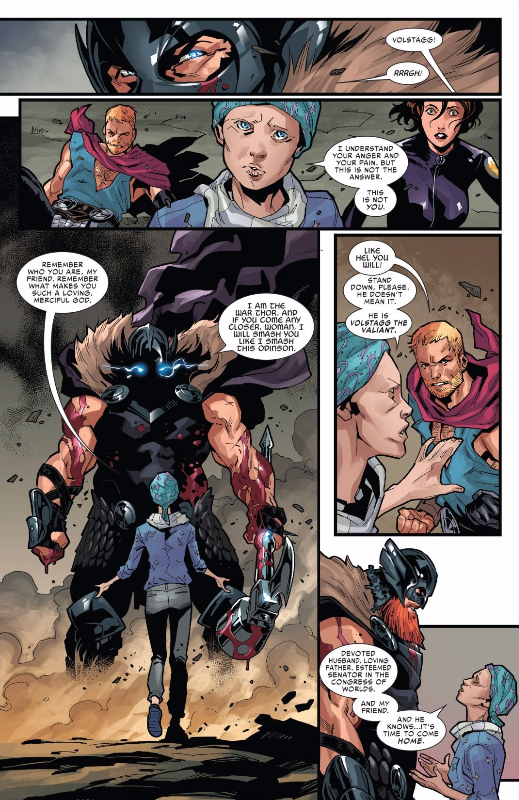 Admittedly, Jane has an advantage here due to her pre-existing friendship with Volstagg, but this is still a victory she could only achieve as Jane Foster, as a human approaching a god with those most human emotions and concepts of mercy and empathy.

This is a significant development, if only because of how Jane had recently been considering abandoning her mortal form altogether and remaining Thor full-time. Jane had begun to think that it was Mjolnir that gave her worth, but she’d forgotten that it was actually Jane Foster who was found worthy, and her human perspective that’s made her such an effective Thor at all. Mjolnir may give Jane the power to back her convictions, but it’s her humanity that makes Jane Foster mighty.