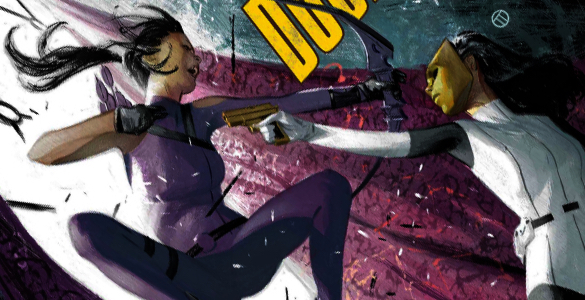 Taylor: If you read enough ancient ancient Greek myths you quickly realize that people have had complicated relationships with their parents since history began. Cronus was afraid his son Zeus would kill him and take over the world so he tried to eat him. Cronus failed. Zeus did indeed come to rule Mt. Olympus but not, without inheriting his father’s fear of his own children. Kate Bishop shares a similarly complicated relationship with her father, the only difference is that she doesn’t fear him so much as she fears to become him one day. This relationship is part of what defines Kate and the way she responds to it is fascinating in Hawkeye 11.

Kate’s life has been pretty messed up recently. She reconnected with her dad, which for most people is a good thing but for Kate it’s one of the worst. Her dad has a new cloned body he’s running around in and he’s also teamed up with Madam Masque. It doesn’t take long for Masque to betray both Kate and her dad, which in this case means she made a clone of Kate and transported her consciousness to this new body. Naturally, this leads to a showdown where Kate in a very literal sense has to battle herself. 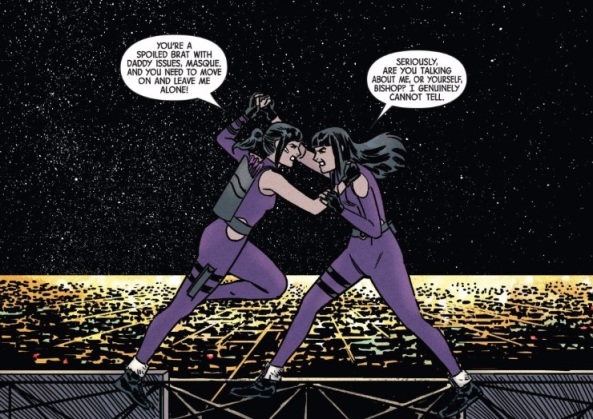 The genius of this battle, as Kelly Thompson has scripted it, is that it works on two levels. The first and obvious one is that Kate is fighting Madame Masque. The second and deeper level that’s more rewarding to think about, is the battle Kate is fighting with herself here. As Masque notes, it seems like Kate is actually spending more time fighting her inner demons in this issue than she is actually fighting bad guys. The confrontation between Kate and her Clone very literally illustrates this point. It doesn’t hurt that Masque points it herself either. And while the metaphor is perhaps a little obvious, I still appreciate the way it sneaks into this issue as a logical part of the plot. Essentially, it’s a perfect blend of form (the metaphor) and function (the plot).

Kate comes to realize the inner struggle she’s undergoing as her confrontation with Masque comes to a close. With her foe dangling from the top of the Hollywood sign in LA, Kate has the choice to either save her nemesis, in true superhero form, or let her fall – something which her father, a super villain would do. It’s at this time Kate has a realization.

Kate sees that if she continues to give into her sense of grief and anger, she’ll end up exactly like her dad. The only way for Kate to move forward with her life and not become just like her dad is to work on changing her life for the better. That means finding her mom, severing ties with her evil father, and reconnecting with the friends that care about her the most.

After Kate has her moment of realization she saves Madame Masque and meets up with her friends. It’s here that Kate does the thing that is perhaps the hardest when it comes to changing something about yourself – she communicates her feelings to other people. For someone as strong willed and independent as Kate it’s difficult to admit things that possibly make you look vulnerable. Leonardo Romero perfectly captures the awkward emotions Kate is feeling in series of three panels as she speaks to her friends.

Easily these three panels could have been just one. However, by electing to use more panels, Romero captures Kate’s struggle to meet the eyes of her friends as she apologizes to them for getting them into trouble. The downward glance in the second panel paired with the pleading eyes in the third so effectively shows that for Kate, dealing with this emotional stuff is hard.

Patrick, I really liked this issue because it so delicately explores Kate’s feelings without ever becoming maudlin or sterile. Kate’s relationship with her father reminds me of ancient myth, only reversed. The fear she has of becoming her dad is real and perhaps the most heroic thing about her is her struggle to not let that happen. That being said, how did you feel about this issue? Where do you think Kate goes from here? Do you totally buy the idea that she could ever become her father? And with you living in LA, I’m wondering if you’ve ever fought someone on the Hollywood sign. It seems like a right passage for any Los Angeles resident, if comics and movies are to be trusted.

Patrick: It’s true. It doesn’t happen your first day in LA, but within the first two months, you’re given a golden movie ticket and told to board a TMZ celebrity home tour bus. You have to get on the bus at Hollywood and Highland, even though that’s like lightyears from where any celebs actually live. But, y’know there’s the Walk of Fame and Grauman’s Chinese Theatre right there, so it feels show-biz-y. Anyway, they load you up on this tour bus in front of theKodak Theatre (across the street from where they film Kimmel!), and you and about 67 other aspiring actors, writers and comedians ride past the Capital Records building and up to the Hollywood sign. Obviously, the bus also stops at the Griffith Observatory so you can all pray to James Dean bust outside. Then, when you finally get to the sign, Michael Bay or Tim Burton or Stephen Spielberg will be on-site wearing a white beret and sitting in a tall chair labeled DIRECTOR. He says “okay, let’s make some stars” and everyone starts fighting.

Oh and the whole time, people are complaining about traffic.

Taylor, I’m sure there’s a danger in Kate becoming her father, but I think Romero mounts a pretty compelling case that the two characters are about as opposite as they could be. I’m super happy you pulled that three-panel sequence of Kate resisting eye contact with her friends before choosing to engage them head on. There’s a similar series early on in the issue which shows her father doing just the opposite with her. 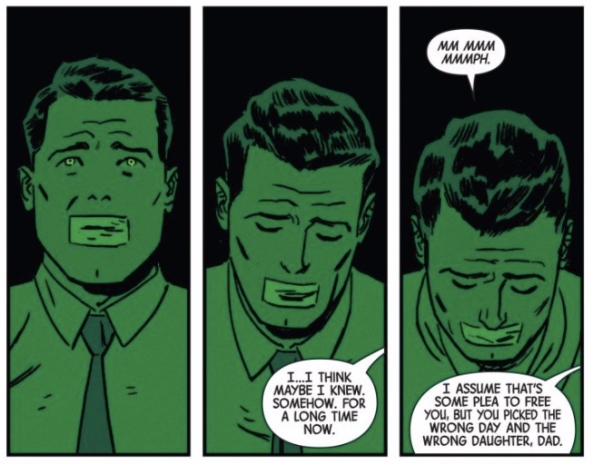 If Kate’s move is to offer up more of herself as the going gets rough, her father’s move is to withdrawal on that same timeline. He shuts down, literally closing his eyes and turning his face away. Even with his mouth covered with tape, he’s looking for a way to not have to communicate with her.

That fundamental difference between them is Kate’s embrace of her own vulnerability. I was teasing a little about the LA specifics in this issue, but there’s such a strong sense of place associated with Kate’s struggle to assert her identity against both her past and her own body. I can’t think of a more typically “Hollywood” story… at least, in the abstract. After Kate rescues Madam Masque, the villain quickly turns on her only to be picked off the sign by an LAPD sharpshooter. Kate’s happy for the assist, but asks the lingering question “how did you know which was was the real me?” Romero makes the answer obvious before Thompson just comes out an says it: 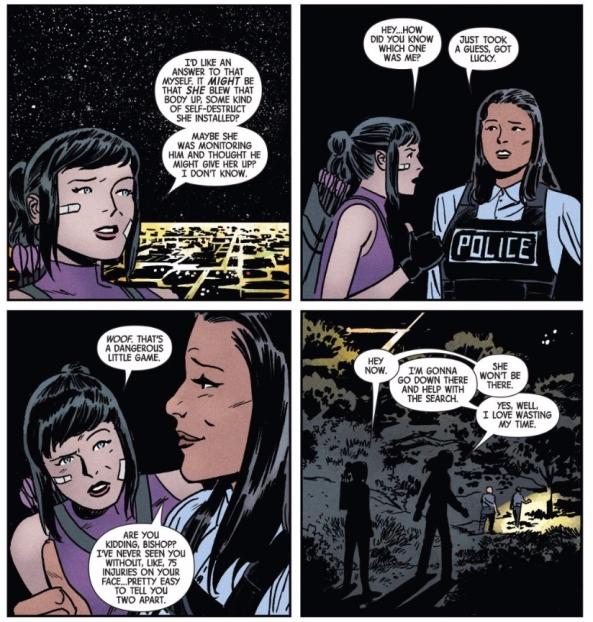 Kate Bishop always has bandages on her face. Look at those two panels leading up to that statement: bandage, bandage. The bandages are actually surprising loaded imagery, as it does more to link Bishop to a totally different crappy father figure – Clint Barton. The identity of Hawkeye, and the attendant heroism, is the life she chose and not the life she was born into. Additionally, each bandage represents a wound she sustained being a goddamned hero (again, just like Clint). You know which Kate is the real Kate because you can see the marks of her good deeds right there on her face. It’s vulnerable and it’s honest.

Which has me pumped for the turn at the end of the issue. Kate moves on to something closer to what she actually wants: finding her mother. She pulls the “Derek Bishop” index card off the board, ripping it in half with thumbtack still in the cork board, and replaces it with a post-it note that simply reads MOM. 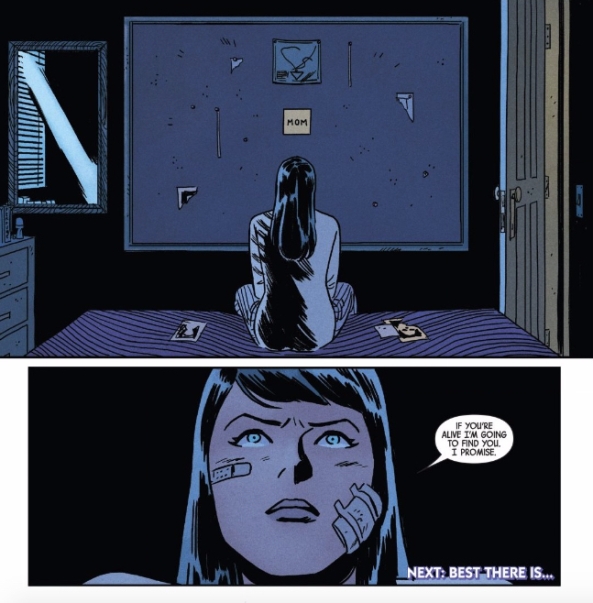 It’s so much softer than the noire detective bulletin board she had up there before. Romero leaves scraps of her old search still on the board, corners of photographs still taped to the thing, threads loosely tacked to a web that no longer connects. None of the rest of that stuff matters anymore, it’s just about Kate looking for her mother. The reverse shot to end the issue is also brilliant: a quick reminder of Kate’s vulnerabilities–the low angle emphasizing the bandage on her cheek–and tears welling in her eyes. She no longer fears becoming her father, but looks forward to meeting her mother. Which Greek god makes that turn?