I’ve always been attracted to the kind of abstract narrative shapes Vonnegut famously catalogued in his Master’s Thesis — there’s something fascinating at the thought that virtually all stories draw from a narrow range of narrative trajectories. But, of course, looking at narratives in such an abstract way overlooks a lot of the texture and details that actually makes stories so thrilling in the first place. That is, while we might take it for a given that the man gets out of the whole, we can still be surprised at exactly how that happens. Those details are what distinguishes one narrative from another, yet even then, they can often feel rote and predictable. Not so with Eleanor and the Egret 4, which uses the cartoon logic of its high-concept premise to deliver some truly unexpected twists.

I mean, Joseph Campbell sure as heck never mentioned anything about the detective/paramour character discovering the protagonist’s magical egret and using it to stage a robbery to exonerate and rescue her. By the end of the issue, Eleanor is out of the hole she had gotten herself into, but few series could pull of a such a charmingly idiosyncratic solution. Then again, few series are as charmingly idiosyncratic in the first place. 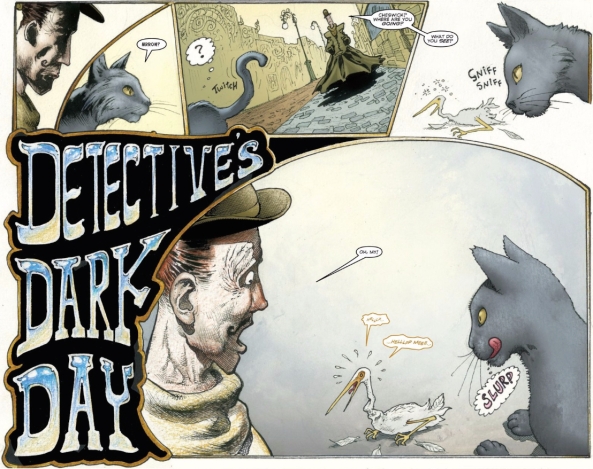 Between hard blacks in those first few panels, the hatching in the latter ones, and the colored-pencil effects on the title, artist Sam Kieth and colorist Ronda Pattison use so many rendering techniques on this page, it almost feels multimedia. Yet it’s all perfectly in keeping with the bizarre world Kieth and writer John Layman have created in this series. It’s a world where we can hear about an art heist and conclude that the art-eating egret we love must be HUGE, and have that conclusion confirmed a few pages later. It’s a world where that egret’s binge can not only exonerate his owner, but also position him to both rescue her and help her get her revenge. It’s a world where basically anything could happen in the next issue.

And that’s a thrill. The rule of narrative shapes may give us some big hints about how things are going to end for Eleanor, but the rules of this series means that we can’t really predict how that ending will come about (you know, other than the presence of a magical art-eating egret). Moreover, Layman still has some backstory in his back pocket that we can only guess at, so while we might have a sense of what the resolution might be, we’re still up in the air on what the resolution will mean. All of which makes for an exciting penultimate issue, putting everything in place while still delighting with its own surprises.