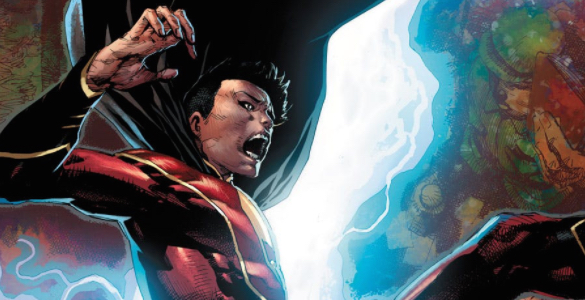 Recently on my morning commute, I’ve been catching up on the Washington Post‘s new(ish) podcast, Constitutional. The podcast’s third episode, “Nationality,” traces the story of Wong Kim Ark, a man born in San Francisco to Chinese parents whose Supreme Court case determined that being born in America made you an American citizen. And while that brief summary makes it sound like his story is a victory for the foundational ideals of America, the details paint a much less satisfying picture. It’s no secret that America is historically a deeply racist country, and that efforts to make forward progress are continually contested making victories hard-won. New Super-Man 16 reminds us how casually pervasive racism used to be, but also provides a measure for some of the progress that has been made.

In New Super-Man 16, writer Gene Luen Yang once again incorporates DC’s past into his story. I had never heard of Slam Bradley, but it turns out he was one of DC’s earliest heroes, showing up in the first issue of Detective Comics to beat up Chinese men rendered in dehumanizing caricature by Joe Schuster. Yang and artist Brent Peeples pull from Slam’s first appearance here, with All-Yang transporting Kenan Kong to an American Chinatown of the late 1930’s where Slam stalks the streets. Kenan doesn’t even recognize Slam’s victims as humans at first, thinking they are “disgusting yellow goblins.” It’s only after All-Yang directs him to use his Qi to see the truth that Kenan sees through the illusion. An illusion, All-Yang tells us, “created to justify over a century of brutality.”

But while New Super-Man 16 shows us the ugliness of the past, it also stands in contrast to that ugliness. New Super-Man is a book written by an Asian-American, starring Asian characters, telling a story melding elements of superheroes with elements of Chinese culture. It took 80 years of DC history for such a book to exist, but exist it does. Yang doesn’t often dwell on the past in New Super-Man, but when he does, it’s a quietly effective reminder of how far we’ve come, even while we have a long way to go.