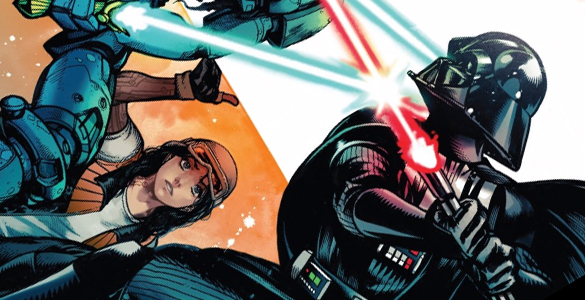 Ah the finale: the last word a creator has on a particular story before they say goodbye. Some finales are literally the final word on a story, while others leave the door open for future adventures. Doctor Aphra 13 is an example of the latter — Kieron Gillen’s final story with Aphra before passing her on to writer Simon Spurrier.

Marvel’s Star Wars comics have to dance between continuity raindrops — making for a series of near-misses that will eventually happen in Empire and Jedi. Gillen takes that same storytelling philosophy and applies it to his own creations that appeared in the pages of Darth Vader.

Aphra is in a tight spot as she’s trying to escape a mess of her own making. Under the threat of the insane Jedi ghost Rur, Aphra finds herself actually rooting for Darth Vader. Naturally Vader defeats Rur — as Gillen makes a wink and nod to some prior Vader stories — and becomes aware that the presumed-dead Aphra is very much alive. Gillen and Kev Walker take this opportunity to recreate a scene from A New Hope:

Of course, the first time around it was Obi-Wan’s presence he sensed. I’m almost positive that Walker replicates the staging of the stormtrooper speaking to Vader as he looks off in the distance, exploring the implications of his realization.

The closing pages of Doctor Aphra 13 introduce story threads that Gillen lets dangle for future writers — or maybe himself — to pick up down the road. The most rewarding of these is the story of BT-1 and Triple Zero.

After spending two separate series in the service of one master or another, Gillen has let his deadly creations to roam free across the galaxy. The affection that he has for these two has always been clear. Personally, I wouldn’t mind a Gillen book focused on the two murder-bots.