by Mark Mitchell and Michael DeLaney

Mark: How I feel about Mister Miracle 3 will ultimately depend on how the remaining 9 issues pan out, and if Tom King and Mitch Gerads are able to stick their landing. In isolation, I’m grossed out by King invoking the Holocaust and the genocide of more than 6 millions Jews in Nazi Germany not once, but twice, in this issue. The Holocaust is one of the modern era’s most visceral examples of mankind’s cruelty towards mankind, and as such it has become shorthand in media for “A Very Bad Thing.” Comparing fictional events to the Holocaust is cheap and easy, and doing so runs the risk of devaluing the real-life horrors experienced by real people and perpetrated by their fellow men.

The issue opens with Scott recounting to Big Barda a Christmas bedtime story Granny Goodness used to tell him before he went to sleep, a story set in the Netherlands during World War 2 about a small child named Sven who accidentally reveals his family has been hiding Jews in the basement of their home, and the suffering Sven and his family endure once their secret is revealed. “Merry Christmas,” Granny would end the story. Scott’s narration of this story is imposed over grainy, psychedelic images of Orion cutting the head from Granny Goodness’s corpse.

Later, Forager appears in Scott’s living room and tells him that Orion has been using The Bugs as cannon fodder in his war against Darkseid. King explicitly references the Holocaust a second time when Forager explains that 6.5 million Bugs have died in Orion’s endless war, 6.5 million being the common estimate for the number of Jewish men, women, and children cruelly tortured and murdered. Forager himself is blinked out of existence by Lightray moments later in the middle of Scott’s home, snuffed out like a candle for violating Orion’s orders. Muttering “Jesus” is the only response Scott is able to muster in the face of murder, and he seemingly returns to bed calmly not too long after. The continuing extermination of The Bugs doesn’t seem to weigh too heavy on him. 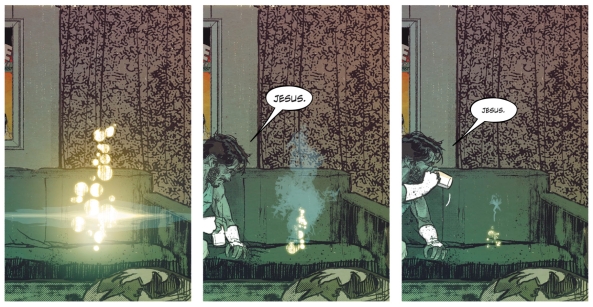 What is Scott Free’s reality? What is his role in Orion’s war? To extend King’s Holocaust metaphor to its logical conclusion, is Mister Miracle a willing General in the Nazi army, or is he a German citizen turning a blind eye to the evil surrounding him? In every scenario Scott is culpable, and by every measure his culpability is horrifying. I guess turning Jack Kirby creations into Nazis is just something we do now.

But, again, we’re only one-fourth of the way through King and Gerads’ story, so your mileage with Mister Miracle 3 may depend on your faith in the duo’s ability to commit to the path they’re taking. For my part, I hope that when the last issue comes to a close we’ll be able to recognize more than just how the story of Sven and his family relates in a meaningful way to the events of Mister Miracle. My hope is that we’ll understand how comparing the fictional events of a comic book to the suffering of millions and millions of real-life human beings was an equivalence worth making. Otherwise, using the Holocaust in an attempt to lend a story gravitas would be seriously gross.

Michael: Oh boy, I feel like I’m going to have to choose my words carefully here. Mark, you are totally justified in feeling unsettled by Tom King’s use of the Holocaust as a storytelling device in Mister Miracle 3. Though I didn’t really have that reaction initially, upon a second read-through I can see where you are coming from. Why did King need to use that as a point of reference for Granny Goodness’ Christmas story? Why did Granny even use a story from Earth’s history as one of her wicked tales? I think the answer for that is the same reason why the most popular Green Lanterns are all human: it’s relatable.

King could’ve have mapped the terrors of the Holocaust onto an invented alien race with aplomb, but the intention here is to make you feel unsettled. King wants us to get an understanding of the world that Scott and Barda grew up in; a world where a child’s caretaker tells him a story that meets kindness with cruelty. 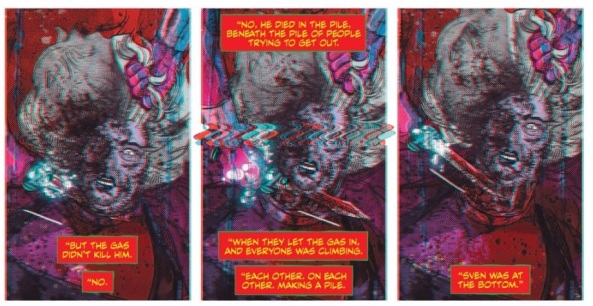 It’s true that this story is juxtaposed over a brutally long sequence of Orion beheading Granny Goodness. However this is one of those frequent occurrences in this series where Mitch Gerads lays on this blurring effect reminiscent of a scrambled cable signal. I feel like King and Gerads want us to feel the impact of such a brutal act without relishing in its gruesomeness. This also led me to focus more on Scott’s caption boxes and the story within.

So I agree with Mark that there is definitely some WWII Nazi/Holocaust imagery going on here, but I’m also not going to lay the blame of pop culture’s overreliance of said imagery on King and Gerads. Orion’s rule as Highfather is unsurprisingly becoming very authoritarian, militaristic and cold. In the face of such a perversion of Highfather’s will, Scott is going to have to question his place at Orion’s side.

What interests me is how casually King treats this New Gods war. Here we have a story about a celestial kingdom in turmoil with a rising death toll in the millions and we still have time for Scott and Barda to have brunch. If this war were taking place in a Green Lantern comic it would be an epic battle full of huge action set pieces. Instead, Mister Miracle is mystery tightly-packed into Gerads’ nine panel pages. Is this casual approach to war a comment on our own indifference to current modern-day atrocities? Could Gerads’ “scrambled signals” be akin to the way we gloss over tragedies and terrors?

With the trippy nature of Mister Miracle 3, I’m still convinced that the world that Scott is living is some kind of illusion. I theorized before that Scott’s suicide attempt in issue 1 was his way of trying to escape this fantasy that he’s trapped in. When Scott and Barda are brunching Scott is stumbling onto a forgotten conclusion of his suicide attempt but he can’t seem to get the words out. Almost immediately after Barda tries to assure Scott that everything is fine, a Mister Miracle fan asks Scott to take a picture with him. Whenever Scott questions his reality or Orion’s leadership, he gets distracted and caught up in his life as a performer.

As I mentioned earlier, it’s not hard to imagine Orion as a hard-headed, murder-y leader. But my tin foil theory hat is still on so I’m just gonna keep leaning into this kind of stuff. After Orion gives Scott that epic “face of God” beat-down, Gerads’ scrambled signals kick in once again.

As the Orion’s image gets fuzzier there’s a single panel where he looks a little different, a little like…Darkseid! Or Kalibak. Or Dan Turpin. Curious that we haven’t seen Darkseid yet in this war, no? Not to mention this is the second issue that the meta captions boxes mention the paranoid pills of Dr. Bedlam — one of Darkseid’s evil pals. Regardless, I am hoping that King will tells us just exactly what “Darkseid is.”