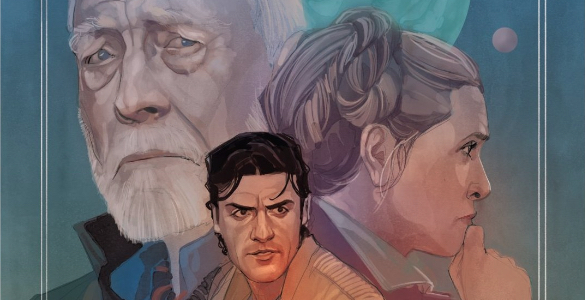 Apart from the obvious comparisons to the structure of A New Hope, one thing in particular that bothered me about The Force Awakens was The First Order. How did this massive evil military force mobilize so quickly with yet another Death Star? By drawing parallels to our current political nightmare, Poe Dameron 20 attempts to explain.

Amidst the doomed search for Lor San Tekka and some romantic drama, Charles Soule writes a background tale of The First Order’s rise to power. As resident seasoned veteran of The Rebellion, General Leia is the mouthpiece for the fear that The First Order’s evil will silently spread.

Leia warns that the Galaxy isn’t taking the threat of The First Order as seriously as they should, and that its indifference will ultimately be its downfall. Sound familiar to anyone? Soule recontextualizes the villains of The Force Awakens in light of America’s surprise at how easy it was for hate to move into The White House.

Poe Dameron is typically a guest star in his own book, which is more of a vehicle for Charles Soule to explore ideas in this third era of the Star Wars saga. The latest of those ideas? Droid romance.

Followed by a sequence explaining droids’ “obsessions,” Angel Unzieta draws a quirky scene that introduces us to BB-8’s new boyfriend/girlfriend/pleasure unit IVEE. I’m sure there will certain corners of fandom that will be outraged, but I say “God bless.” The fact that we don’t directly hear/see what a droid is saying leaves much of said romance up to the imagination, which is great.

Unzieta also revisits a fan-favorite moment from The Force Awakens: BB-8’s “thumbs up.” Again, I love the idea that droids have their own subculture and no one really knows what they’re up to. Personally, I’d be more interested in a droid uprising than The Galactic Empire Jr.