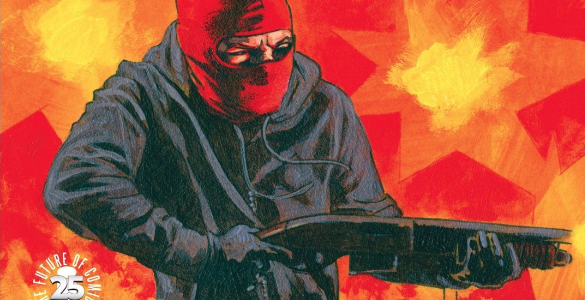 It’s easy to deride “this time, it’s personal” — even without the association with the fourth Jaws movie, the sentiment has always carried with it a kind of self-parody. Or, I should say: that particular articulation of the sentiment has always felt that way. But the notion of a narrative escalating because of personal stakes is essential to virtually all drama (though, admittedly, not every drama has an impersonal/personal threshold that needs to be crossed). Which makes the implied sneer that goes with saying “this time, it’s personal” somewhat unfortunate — otherwise, it would be the perfect way to express Dylan’s newfound motivation for his war on the Russian Mafia.

I know, I know — he didn’t exactly need any new, personal stakes to motivate him. He is already fighting for his life, and we’ve already see him resolve to go on the offensive to preempt threats to himself and his loved ones. But then again, Dylan’s eventual actions — the ones we were teased with way back in the first issue — are extreme enough to warrant a little extra motivation. Without a demon/hallucination egging him on, Dylan needed something more to push him into “taking on a building full of goons” territory. That something comes in the form of Dylan’s own father, whose own personal narrative is twisted (or at least re-emphasized) by Dylan to cast him as the victim of organized crime. 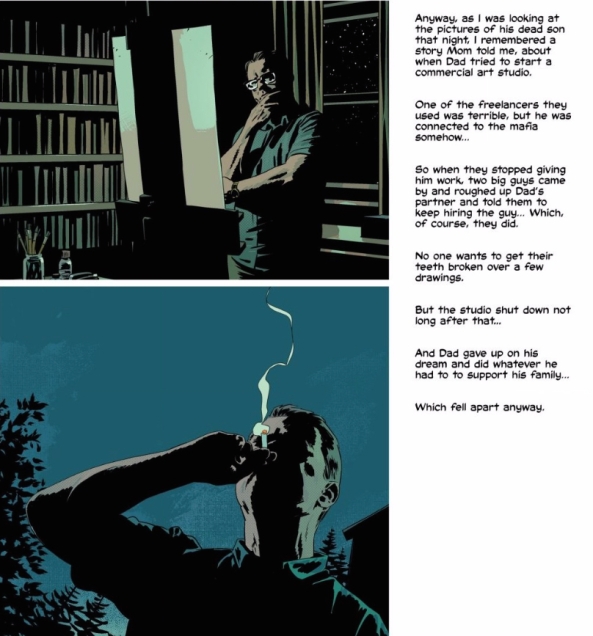 It’s understandable why this particular anecdote would sprig to Dylan’s mind, but Dylan’s own words seem to undermine the kind of emphasis he eventually places on it. As Dylan fixates on this moment, he spins the mafia enforcers into “the men who’d taken my dad’s dreams away” — as the de facto reason Dylan never knew his father. Only, when Dylan relays the actual story, he doesn’t give those men that kind of significance. Nor does he give the work of the “terrible” freelancer enough significance to cause the whole studio to fold — he dismisses them as “a few drawings,” hardly dream-killing cross to bear Dylan eventually makes them out to be.

Instead, the tizzy Dylan works himself into feels like a convenient excuse for what he had already been planning — one of many he’s cooked up in order to justify his violence. But, of course, that predilection for violence seems to be the real story here, as Ed Brubaker and Sean Phillips connect Dylan’s delusions and self-destruction to that of his father and heretofore unknown half brother. Early in the issue, Dylan muses that the demon hallucination may be a manifestation of some very specific family illness, and while we don’t get any more clues on the provenance of the demon, Phillips’s approach to Dylan’s father connects the two very strongly. I’ve often remarked on the way Phillips often casts Dylan’s face in hard black shadows, but for a refresher, here’s a typical sequence from this issue:

Even when Dylan’s in an amusing scene of parental oversharing, he’s inked in this way. It’s easy to see the connection between Phillips’s approach to Dylan in this image, and the approach to his father in the previous one, but what’s really important to note is that this treatment is reserved almost exclusively for these two characters. The only other hint of it we get in this issue is when Dylan’s mother reveals the fate of his half brother, which only cements the notion that those shadows represent a deep inner sadness. Dylan’s mother dips into it for only a moment, but he and his dad seem to live in it. Whatever Dylan says, that’s the real motivation for doing what he does, which is just about as personal as it gets.