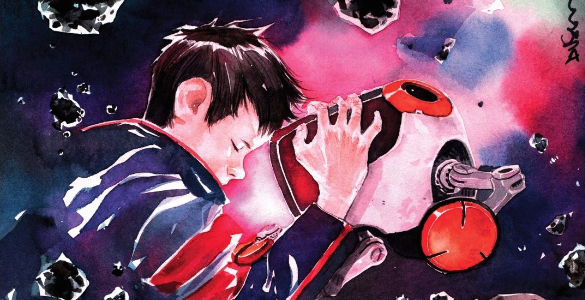 I’ve come to love Descender for a number of reasons: the vast universe and mythology Jeff Lemire and Dustin Nguyen have created, Nguyen’s lush, gorgeous backgrounds and designs, Lemire’s complex characters and intricate web of events. The very first thing that drew me to this series, though, was Tim-21 himself. The concept of a young robot on the run for his life, combined with Nguyen’s adorable design for Tim, immediately made me want to follow this series simply because I felt protective of Tim-21. As the series progressed it found Tim-21 slipping into the background, but Descender 25 serves not only as a grand spotlight for Tim-21, but a testament to what makes him great — and what he may be able to accomplish in the future.

Although the creative team draws no attention to their anniversary (a 25th issue is pretty significant!), this still feels like a landmark issue. Lemire and Nguyen start to bring their many threads and characters together and take us on a whirlwind tour of several different settings and environments. The most stunning moment may be Tim-21’s cyberspace interaction with the “Harvesters,” but we also get to follow Tim through a thrilling escape from the Hardwire’s base and his heroic rescue of Captain Telsa from Tim-22. Yet, Tim-21’s most significant moment, at least to me, is a small, tender exchange between he and Bandit. 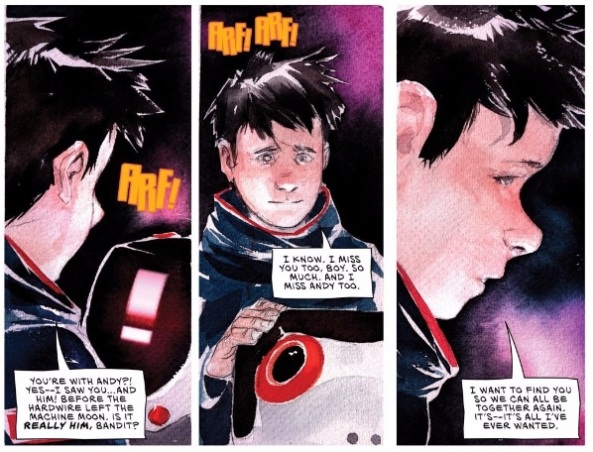 All Tim-21’s ever wanted is just to be together with his friends and for them to all be happy. That kind of sweet naivety has often put Tim in danger or made him a reactive character, but in Descender 25 his compassion instead steels and fuels his resolve, motivating him to rush to Telsa’s rescue, even if it means standing up to Tim-22, who nearly killed him in their last encounter. He’s growing quite a bit as a character.

That can also be seen in his interaction with the Harvesters. Readers have known for a long time that Tim-21 is a special robot, but this is Tim’s first glimpse of his own significance. We don’t yet know why Tim-21 is linked to the Harvesters or how the UGC plans to use that connection, and I’m sure Tim-21 will have quite a lot to grapple with when it comes time for him to fulfill his destiny. Still, the fact that he immediately uses the information he gained from his vision to save a friend shows that he’s a robot of integrity, who can be trusted to do the right thing when the time comes. It’s been a pleasure to see Tim-21 grow into such a young hero, and I can’t wait to see where he goes from here.