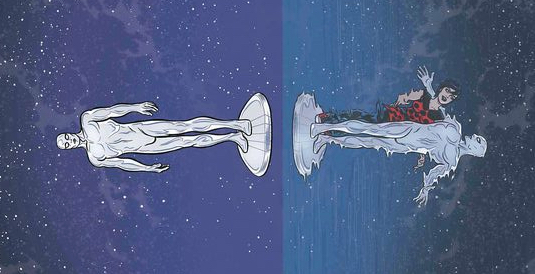 Spencer: When it comes to weaving together long-term plots and storylines spanning years and years, Dan Slott might just be the best there is right now — if not in all of comics, then almost certainly in mainstream superhero books. Silver Surfer 14 is Slott (and Michael and Laura Allred) firing on all cylinders, bringing two volumes’ worth of stories to an immensely satisfying ending. It not only resolves and honors everything that’s come before, but continues to put all the qualities that have made Silver Surfer such a quality read on full display: wonder, adventure, joy, love, and pure emotion — oh, and some metatextual fun, too.

Last issue was such a perfect goodbye for Dawn (who passed away after a long, happy life with her true love in another, older universe), and would have made a more-than-acceptable series finale; I almost felt hesitant to crack this issue open, worried that something might happen to sully Dawn’s happy ending or the life she got to live with Norrin, but I needn’t have worried. This final issue is indeed all about Dawn Greenwood, but about Norrin grappling with a world without Dawn and about the legacy she’s left behind.

We see the effect Dawn’s had on Norrin fairly early in the issue. After surviving the birth of the new universe, Norrin is forced to hide himself in a disguised, intangible state (Nor-Ville), spending millenia just watching the universe form. After the birth of Galactus he becomes obsessed, following the planet-eater for centuries, and eventually watching himself become Galactus’ herald and re-living his own crimes. When they eventually return to Earth he looks forward to seeing his “rebellion, liberation” again…but instead, something different happens.

Norrin — in the form of Norville Rapaport — instead visits the Greenwood Inn, willingly remaining there even when he knows it will mean being trapped on Earth for a decade. Once again it’s Dawn that pulls Surfer out of his slump, out of his obsession (and perhaps pity party?) — it’s something she was always good at in life, and her influence continues to help Norrin see more clearly even after she’s gone.

I like the shooting star angle to this scene as well. Dawn’s actual wish is selfless, but the creative team are still able to imply that Norrin’s eventual arrival in Dawn’s life is an answer to her wishes, a reward for her kindness and generosity, but also that Dawn herself was an answer to the Surfer’s deepest wishes, someone to give him a different, more human perspective on an universe he was otherwise very familiar with.

That part of Dawn will always be with Norrin, but in one of the most romantic, heartwarming gestures I’ve ever seen, he also makes sure that she’ll always be a part of everything, as well.

I’m not gonna lie — when I first read this issue, I spent at least a good minute just staring in awe at that final rows of panels, my eyes starting to tear up, my hand over my agape mouth. What an absolutely perfect ending for Dawn. It’s the kind of conclusion only Silver Surfer is capable of: something intimate, but on a cosmic scale, full of grand ideas and even grander emotions. It’s also a reveal that could be tied into the very inception of Dawn as a character, a plan Slott might have had in reserve for years. I can’t help but love that.

Slott and the Allreds also seeded another conclusion for Dawn, though. Though I wasn’t expecting it to show up again, the creative team had been hiding another Dawn Greenwood in plain sight this whole time — her hologram counterpart, living on the world of Inkandessa. She can’t join Norrin on his adventures, but Norrin can make sure she has the greatest life possible, creating hologram copies of himself and her beloved family to live out eternity together. 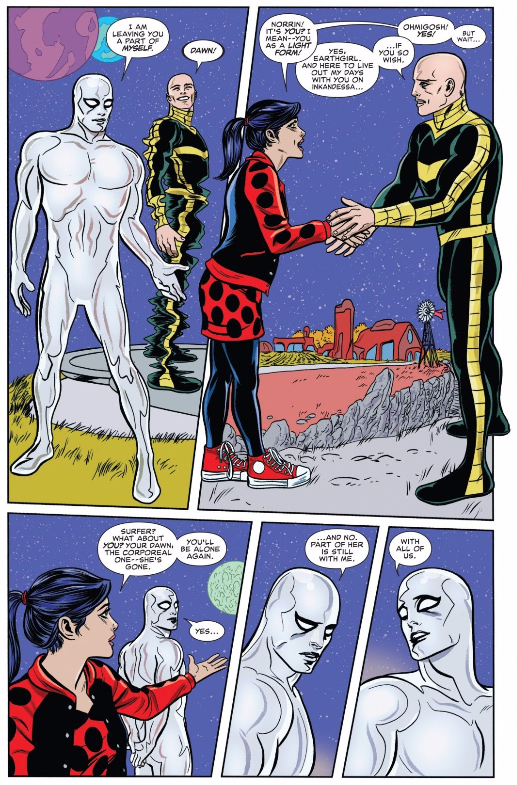 It’s a beautiful gift and a second happy ending for Dawn, but it’s also another Silver Surfer speciality: a metatextual comment on the way we read comics. In the past those comments have been a bit more blatant, but this is no less effective. In his afterword, Slott mentions that the problem with “Anywhere and Everywhere” “is that [the tagline] also includes the place where you stop.” Everything ends eventually, even in comics. Silver Surfer will still be here, but Slott and the Allreds’ run was always going to have to end eventually — the Surfer will have new adventures, ones influenced by his time with Dawn, but they won’t be the same for him or for readers.

But just like a version of Dawn, Norrin, and the Greenwoods will always be preserved just as we remembered them back on Inkandessa, the past 29 issues of Silver Surfer will always exist. Not just in our heart, but in our longboxes, our Comixology accounts, on our shelves. No matter what happens to Norrin next, no matter what retcons or reboots he undergoes or what kind of real life setbacks we face, they’ll always be there to revisit, so in a way, the adventures will never end. In the conclusion to their first volume Slott and the Allreds made a similar reference, but pointed out the futility of existing only for nostalgia. Here, though, they acknowledge the comfort nostalgia can bring. I have a feeling we’ll all need it from time to time. In an increasingly brutal world, it’s nice to know that Slott and the Allreds’ Silver Surfer will always be there to offer a beam of hope.

Drew, I don’t think I can fully articulate how much this issue touched and moved me. I couldn’t be happier with it. How about you?

Drew: Goodness, this is ending is so much better than I ever could of hoped for. We’ve come to expect the ends of runs at the big two to feature “putting the toys back” — returning the characters to the state they were in at the start of the run (more or less). That is, while Batman may find the love of his life, he’ll never truly be able to live happily ever after with her, since that would necessitate the kind of permanent change of status quo that is virtually unheard of in comics. Slott basically plays by those same rules, leaving Norrin as the solitary traveler we encountered at the start of the run, but manages to give us that “happily ever after” ending, too.

I have to agree that the previous issue was the perfect ending for Dawn Greenwood, the truest manifestation of “happily ever after” I’ve ever seen in a mainstream comic. But it hadn’t put Norrin back where he belonged. It might have been enough to simply transport Norrin back to the present day so that he could be used again by whatever creative team found use for him, but that would have certainly lacked the tragic beauty — and Silver Surfer-y wistful loneliness — of waiting the entire history of the universe in mourning for his lost love. 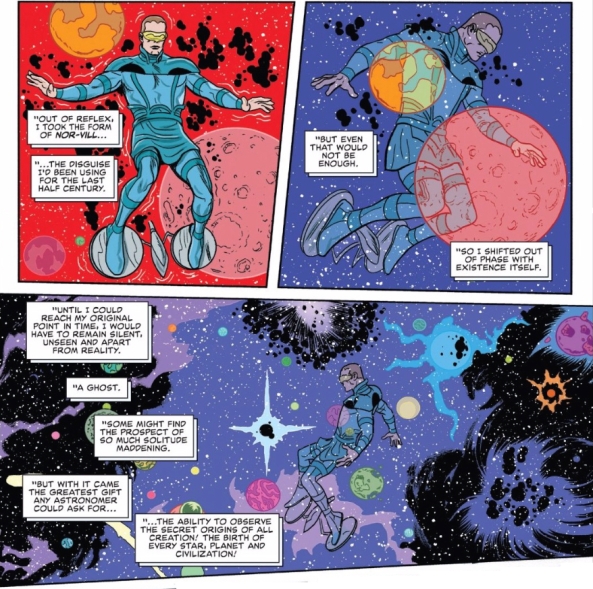 But, of course, it isn’t just wistful loneliness. I mean, it most certainly is for the first 13.82 billion years, but Norrin makes a key exception for the Greenwood family, an exception he notes that he didn’t even make for his own family on Zenn-La. He notes that he’s “breaking the rules” by doing so, but his desire to be near the people he loved so dearly takes precedent — a remarkably emotional reaction from such a stoic character.

Which speaks to the subtle ways Norrin actually was changed by this story. Or, more specifically, by Dawn. It’s always dismissive to suggest that a story truly returns everything to its original state, as if it never happened, but that’s particularly true here, where a character that is typically defined by loss, remorse, and detachment is given a chance to reconnect and live without regret. He loses Dawn, sure, but only after a full, happy life with her. And actually, I think his story here might better be understood as one of creation, rather than loss. Spencer already mentioned the “break of day” sequence, but we can’t neglect the detail Norrin omitted from his story, the dedication he made at the start of the universe:

The Kirby Crackle is such a signature of the character, this gesture feels perhaps even bigger metatextually than it does in-narrative. I can’t speak with any authority that “Red. With black dots” is now part of the official style guide for Silver Surfer’s power cosmic (though I suspect it probably is), but I guess it doesn’t matter. The point is that Dawn has profoundly changed Norrin — not just how he feels, but who he is and what he does. He may look as silver on the outside as ever, but now we know the true color of his heart.