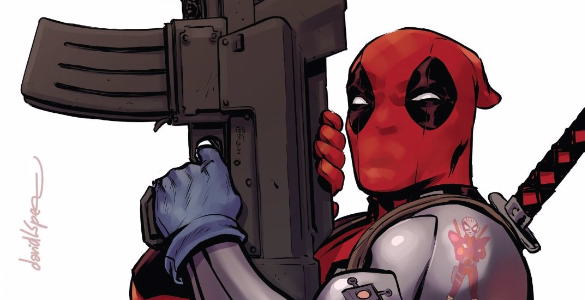 Deadpool has always had an interesting relationship with violence. Its titular hero is one of the more bloody characters in the Marvel pantheon, yet he’s also one of the funniest. This means that at the same he’s committing atrocities, Wade Wilson is also cracking jokes. This relationship is easier to write than it is to draw. After all, how are you supposed to draw someone being killed and have it be funny? Scott Koblish seems to have figured that out, turning a bloody issue into one that somehow retains its humor in spite of (if not because) of its violence.

Wade is still on his mission to kill Cable, and nothing will stop him, not even the time police. Taken prisoner by the Time Variance Authority, Cable finds himself waiting patiently for Deadpool to arrive via a path of slaughter. At one point, Deadpool cuts off the head of a Time Variance author to use his eyeball on a retinal scanner. While this is a hyper violent action, when illustrated by Koblish it’s more funny than anything else.

There’s a lot that goes into making this panel something amusing as opposed to horrifying. First and most noticeably, Koblish uses a forced perspective to exaggerate the severed head of the time variance officer being held by Wade. The result is a panel that’s reminiscent of  Porky Pig’s famous “That’s All Folks!” line, and any time a panel can be compared to Looney Tunes it’s more often funny than not. More, Koblish draws the decapitated head with an over-the-top dead eye face. Practically the only thing missing from this expression is X’s over the eyes, but the result is the same. We don’t morn the death of this time cop or recoil at the violence. Instead it’s easier to laugh at Deadpool’s merry little killing spree.