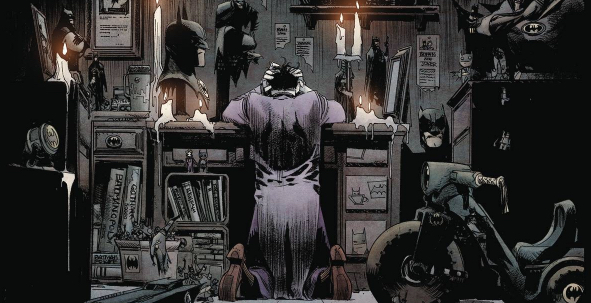 I wasn’t really sure what to expect from Batman: White Knight, but I can now safely say that it is indeed worth the hype. White Knight is part Elseworlds, part political commentary, and part meta commentary on a particularly shameful retcon of recent DC continuity.

Sean Murphy isn’t subtle about where he draws his Batman inspiration from. The reformed Joker reclaims the Jack Napier moniker from Tim Burton’s Batman. And the canon and visuals from Batman: The Animated Series are undeniable.

I think my favorite example of his reverence for that groundbreaking series comes in the form of a meta-showdown between classic Harley Quinn and the scantily-clad version from The New 52 and the Suicide Squad movie. By making nu-Harley a loathsome sprit of spite and classic Harley’s “feminism” jab, Murphy speaks for all of us fans of the original Paul Dini creation.

Murphy’s Jack/Joker dynamic is an interesting twist on The Clown Prince of Crime — one that’s probably necessary if we’re supposed to be semi-rooting for him to take Batman down. There’s also something to be said about this in relation to Harley herself. The Harley/Joker relationship has always been a study in abusive relationships. But here Murphy is literally splitting their respective personalities into two separate people; excising their negative, hateful qualities.

A frequent criticism of Batman is that he hurts more people than he helps — both on the civilian and villain side of things. Murphy takes that a step further and shows how the 1% could game the system and abuse local government policies to line their pockets.

Check out this book you guys.

One comment on “Politics and Puddin’ in Batman: White Knight 2”