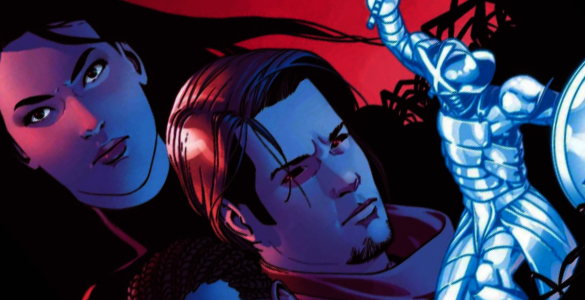 I’ve recently been playing a lot of Zelda: Breath of the Wild, and while I love the game, there are times it frustrates the hell out of me. Usually, this frustration comes in the form of puzzles located in shrines scattered throughout Hyrule. While a lot of the shrines are solved using logic, there are some that just require skill and a lot of patience to complete. I can’t count the number of times I’ve come close to solving one of the skill shrines only to have something get bungled up at the last minute. This sense of frustration in the face of near victory is familiar to me now, and it’s why I recognize it so readily in Astonishing X-Men 5.

So what’s the cause of this almost-got-it frustrations (there’s probably a compound German word for this feeling, right?)? It’s not found in the battle between Professor X and the Shadow King. It’s not found in the battle raging in London. No, this sense of frustration comes at the hands of this issue coming so close to doing something special, but ultimately not being able to pull it off.

What is it it that Charles Soule almost pulled off? A commentary on the very nature of story telling and how that relates to comic books and the X-Men. The near-miss comes when Charles Xavier is detailing his psychic battles with the Shadow King on the Astral Plane.

Charles says that these battles take the form of math equations, emotions, and finally stories. In these stories, they told epic tales of an army made up entirely of Wolverines fighting an army of gigantic spiders and so other such wildly crazy stuff. That idea is awesome, but it’s also where Soule misses his chance on commentary. The idea of Charles and the Shadow King telling stories about the X-Men is the perfect basis for some sort of meta-commentary on the importance of story telling, comics, and the X-Men franchise itself. Unfortunately, after introducing this enticing idea, Soule takes the narrative in a different direction and his chance at a great issue with it.

This isn’t to say the issue is bad, but, just like the shrines in Zelda which frustrate me, so too does this issue, because I’m left lamenting a lost opportunity.