Patrick: For as much mythological importance as we place on origin stories, the question of how a superhero came to be very seldom adds up to his or her actual origin. Batman is the example in question, so let’s use him: a random mugging in crime alley, a broken string of pearls, two shots fired, an orphan. That’s quintessential, primordial Batman — the very stuff of which he is made. But that’s incomplete. A DC Comics murderers’ row of artists and writers set out to remind readers just how strange Batman’s origins really are in Batman Lost 1. In so doing, they also remind us how infinite and unpredictable Batman’s future truly is. It’s a dizzying collage of what-ifs and secret histories, all presented as true with unflinching authority.

A lot of that authority comes from the credits page. I mentioned that the creative team was stacked here, but I still might be underselling just how representative these writers and artists are of DC in 2017. The writing team is led by Scott Snyder, who had been calling the shots on Batman until about a year ago. Snyder put his mark on Gotham in a number of meaningful ways, but principally through the shadowy Court of Owls, which operated in secrecy throughout the city’s history. Now Snyder sits as something of the Batman godfather, presiding over prestige Batman titles with far-reaching consequences for the rest of the universe. But Snyder’s work, influential and graceful though it may be, is perhaps still not enough to evoke the sort of absolute authority a story like Batman Lost requires. Enter: James Tynion IV and Joshua Williamson. Williamson has flitted around the periphery of Batman books for ages, and Tynion has been sailing the good ship Detective Comics since Rebirth. These three writers represent the big picture for Batman in 2017.

(I do think you could make a case for asking the question “Okay, then why isn’t Tom King involved?” It’s a good question, but I think one that I’d counter by saying that King’s contributions to Batman are more tonal than they are mythological. As such, we’re not deep enough in his run to totally understand its role in shaping Batman. The pastiche-makers of the future will have to deal with King’s Batman, but there’s sorta no room for that here.)

The second place this authority comes from is in the choice of Batman story that is to be retold: The Case of the Chemical Syndicate. That’s the story from Detective Comics 27, and the first appearance of Batman. This is, in a very literal sense, the origin of Batman written and drawn by the inventors of the character, Bob Kane and Bill Finger. But the imagery might not be as familiar to Batman fans as bleak Year One scene I described in my introduction, to the point where it might be hard for the reader to spot the discrepancies in the tale that Bruce does. 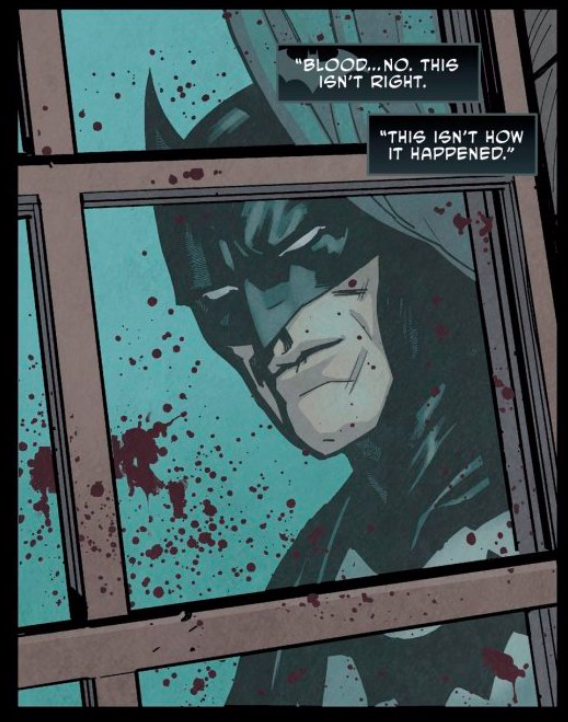 The original story was all about the Bat-Man’s ability to intimidate people and physically overpower them, but this retelling of the story, Batman’s applying some pretty sophisticated blood and fingerprint analysis to the case. It’s the kind of detail that jives with our current perception of the world’s greatest detective, but which clashes with the history as we understand it. That’s an important tension, and one that Snyder, Tynion and Williamson use to light a fuse that will blow up Batman as we know it.

Which is where the greatest — and strangest — authority of all is invoked: Grant Morrison. Barbatos, the Miagani, The Return of Bruce Wayne — these are the trippy AF building blocks of Morrison’s construction. When a futuristic looking Damian appears, the scene practically groans under the weight of the Morrisoniness of it all.

I love how much Batman resists all of these tweaks and changes. “This isn’t real” he says to a son he doesn’t really believe is there. Bruce resists the rewriting of Morrison the same way he was resisting the rewriting of Kane and Finger.

The remainder of the issue bops Batman around to different versions of hypothetical Batman-futures (man, I wanna read that Mayor Joker story), but Bats keeps willing himself back to the story of the Chemical Syndicate to get his own history “right.” But that’s where the tension I mentioned before comes back: in Detective Comics 27, Batman punches the villain right into a vat of acid and then smirks “a fitting end for his kind.” Even in getting the story “right” (i.e., as it was originally presented), the story is wrong (i.e., not consistent with what we know about modern Batman).

At that moment, drowning in a vat of acid, Stryker poses the Rorschach question: what do you see?

Which is as good a point as any to hand things off to you, DeLaney! This issue does such a good job of priming us to question the past that I’m not sure what to make of these visions of the future. Also, I got so tied up in the writerly authority of Snyder et. al that I neglected to mention the artists — Yanick Paquette, Doug Mahnke and Jorge Jimenez — all of whom have some damn impressive Batman bonafides. Paquette in particular worked with Morrison, strengthening this issue’s ties to The Return of Bruce Wayne. How do those Paquette-ian layouts re-enforce this team’s authority? Also, why does Batman’s bookshelf look SO MUCH like mine? Follow up question, where’s his collection of Usagi Yojimbo comics, hm? And my most important question: how disappointed were you when you realized this wasn’t a Batman / LOST crossover comic?

Michael: Hmm now I’m trying to think who Batman would be on LOST. If we’re playing on the Jack/Man of Science vs. Locke/Man of Faith then he’d probably be Jack. Ooh, also like LOST, this particular Batman adventure has our hero semi-unstuck in time and unsure of what his reality is. As for the bookshelf, Scott Snyder has indicated that there’s an easter egg for an upcoming Batman story. Seeing as how every other book is the title of an actual Batman story, I’d say that this upcoming Batman story might be titled “No Justice,” which I hope has some of that Harley Quinn/Batman “Justice Wars” scene in it.

Patrick, I really like your read of how “The Case of the Chemical Syndicate” is Batman’s true origin story, but it’s also clear how much Year One influences Batman: Lost — as well as Snyder and Morrison’s work. It’s interesting how many iconic symbols these Batman writers can draw from that Year One scene, where a bloodied Bruce Wayne sees the bat crash through the window. For Morrison he took the images of the pearls, the bat, and the bell Bruce rings for Alfred’s medical attention. Snyder, Tynion, and Williamson focus on an aspect that is more elusive, but no less important: the window that old bastard bat flew into on that fateful night.

“It all started with a window…” The opening line of Grandpa Bruce’s story recollection for his “granddaughter” is a betrayal of the 78-year-old hero’s memory. The Year One symbol of the window is now also a part of the very first Batman story. This “curious window” pops up multiple times in Batman: Lost: in blood-stained windows, Batman trapped in a glass prison, and finally the reveal that Barbatos himself is watching Bruce through the window.

There’s all sorts of metaphors and themes you could apply to the window: voyeurism, reflection, protection, etc. Paquette draws Batman under a glass dome, “looking through, but trapped inside.” 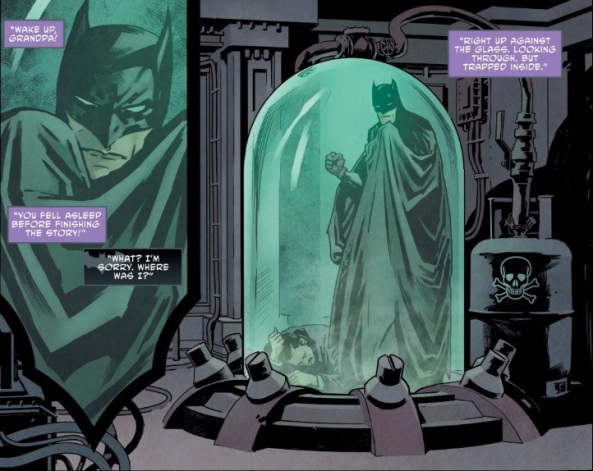 Bruce himself is trapped in Barbatos’ proverbial glass dome: he’s watching/living different parts of his history and future, unable to truly affect any of them.

Whenever he gains his senses, Bruce remembers that the window is the way out of this endless loop, which he eventually takes advantage of. Another striking visual of Mahnke’s is Grandpa Bruce crashing out the window in defiance of Barbatos — an inversion of the Year One bat crashing in. It’s here where Bruce comes face to face with Barbatos in his true form, which essentially boils down to The Spectre with bat ears. Barbatos shows Bruce the Dark Knights that plague his friends and tells him that he let them in through the window. Windows abound!

While there’s amazing contributions by all its artists, I get the feeling that Paquette was in charge of Batman: Lost‘s layouts. The book’s double-page spreads specifically have Paquette’s sprawling design that leads the eye from panel to panel in no uncertain terms. What catches my eye most of all are these slivered panels that appear numerous times throughout the book, highlighting a particular action of the panel or functioning as its own panel entirely. The bottom of these panels is reminiscent of the “tail” section of the bat-symbol. But it could also function as a shard of broken glass — Metal has not been without its fair share of Crisis nods.

There is…a LOT to unpack in this book, it’s almost overwhelming — a feeling that Bruce can probably relate to. Throughout the issue Bruce is thrust from one “reality” to the next, trying to maintain his identity as well as what he believes to be true about his own history. Grant Morrison’s M.O. was to incorporate Batman’s entire publishing history as the life of one man. Here, Snyder & Co. take that step further by saying that even the things that contradict one another are equally true.

In a, way this is Batman as continuity police: “This is another story entirely.” He doesn’t want his origin to be rebooted, retold or combined, but we as comic book readers know that that is an impossible battle to fight. Batman’s story has been rebooted to become a precursor to Barbatos’ arrival; a franchise movie whose only purpose is to set up the sequel. It should be said that some reboots/reinterpretations are good things; they’re not all part of a plot to resurrect an evil bat god.

Since it seems Bruce is stuck in this endless loop, there’s a lot of circular storytelling and mirroring going on here. The very nature of the Final Crisis-Hyper Adaptor-Barbatos link is a chicken/egg ouroboros in and of itself. Grandpa Bruce calling out to Barbatos to “come out and face me!” is the exact same thing that the bow-tied fellow in The Case of The Crime Syndicate said.

A couple of things I’m still unclear on, but what intrigues me most of all: is there supposed to be more significance to the “sacrificial virgin”? Almost every autonomous force that Bruce encounters is Barbatos in disguise except for this woman and the cloaked woman in Batman’s prehistory. Are they the same person? These two apathetic women who seem resigned to fate read like a cosmic neutral party a la The Watcher; will she/they play a bigger role?