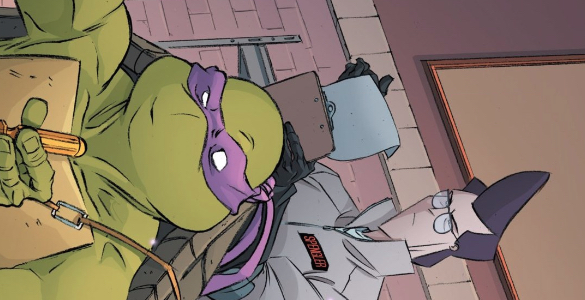 As a kid, I had a lot of action figures. Ninja Turtles, Ghostbusters, G.I. Joe, Star Wars — you name the franchise, I probably had at least one figurine from it. Part of the fun of having such a large collection was that I could mix and match the toys in any way that made sense to my imagination (which means it required little sense at all). This meant that sometimes Donatello would drive the Millennium Falcon or Peter Venkman might drive the Pizza-Cycle. This spirit of boundless play has been all but beaten down in me by society, but luckily it lives on in TMNT/Ghostbuster II 2.

In the last issue, the Turtles teamed up the Busters because they needed help dealing with some ghostly matters. Long story short, three of the turtles find themselves jumping through dimensions in an effort to escape the Collectors. These adventures in new, strange worlds are the focus of the issue, and it is delightful.

While all the stories are fun, my favorite has to the one that focuses on the duo of Michelangelo and Venkman. They transport into a dimension that is a version of Manhattan populated by anthropomorphic animals. As Venkman points out, it’s probably incorrect to call them mutants, but damn if that doesn’t stop Mikey from seeing a rat-man who reminds him of his father. In a touching scene, Mikey breaks up remembering all of the drama surrounding his relationship with his dad, but luckily Peter helps him out by putting his psychology degree to use. It’s a nice scene, made all the more so because its two goofballs taking the chance to discuss their feelings.

That alone is enjoyable enough, but things get even better when Peter and Mikey get chased by a version of the Ghostbusters — who happen to be turtles. 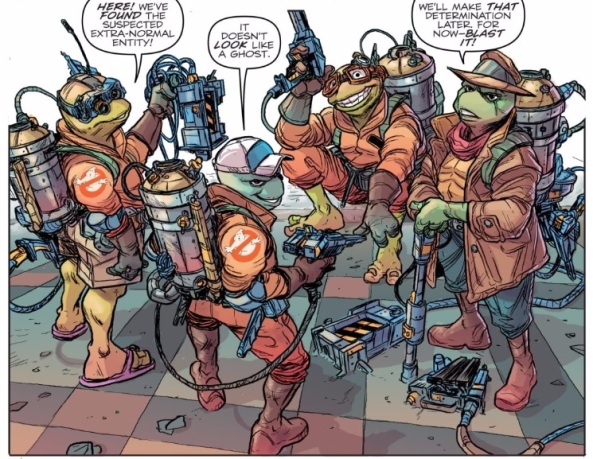 Tadd Galusha’s image of the these Teenage Mutant Ninja Ghostbusters is just wonderful. It’s reminds me of the times I would have Raphael drive Ecto-1 just because it was fun and cool. That same feeling pervades this image. It’s hard to imagine Galusha not having fun drawing this crossover, as it’s the stuff that many childhood dreams are made of. As an adult, it’s doubly fun to see something only imagined as a kid materialize in published form. Just as with last week’s issue, this issue is a great read because it’s clear it’s all about fun, both for the readers and the creators.