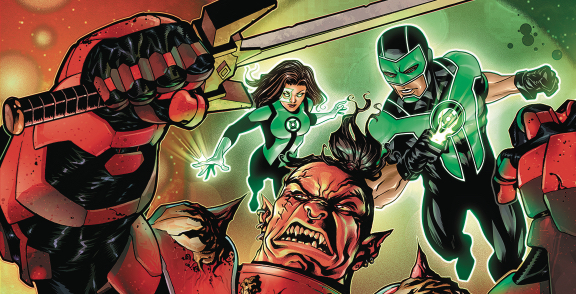 It’s great to see Tim Seeley having fun again in Green Lanterns 35 after spending so much time in the joy-deprived and muddled world of his Nightwing run, and introducing Bolphunga into the mix lets Seeley cut a little looser than he did in Green Lanterns 34.

Here, Jessica Cruz and Simon Baz’s troubled personal lives are still given their due, but weigh less heavily on the proceedings, like when we’re treated to the aftermath of Simon’s hook-up with Night Pilot (courtesy of an unnamed Tindr-But-For-Superheroes app). There’s something both comical and relatable in Night Pilot’s polite rejection of further dalliances with Simon — dude may be a superhero, but he doesn’t have much at the moment to offer a partner. 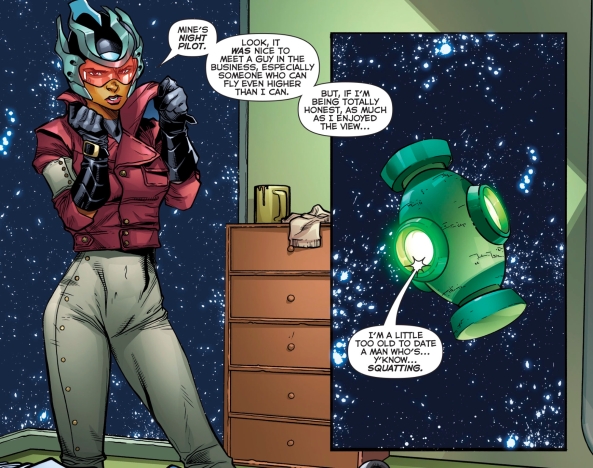 As for Jessica, it’s a small point but I can’t help but fixate on the fact that she must have absolutely destroyed the Lovely Stump Cafe when she charges at Bolphunga and knocks him outside. There’s something to the fact that she’s angry about her personal life and takes it out on Bolphunga, making a huge mess of her place of employment in the process — basically how Simon and Jessica’s superhero lives keep getting in the way of their real lives — but it’s not followed up on here. I know we have soul-sucking angels to look forward to in the future, but hopefully there’s also room for the more relatable character moments that are making Seeley’s Green Lanterns run so enjoyable.