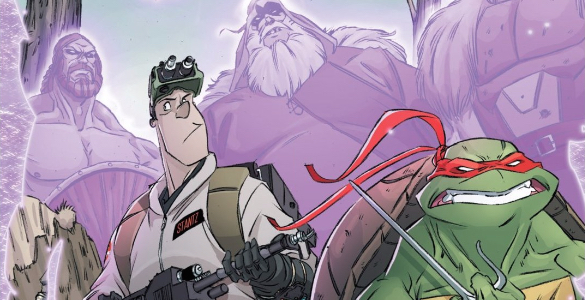 Crossover stories are meant to be fun, but like all the best stories, they also have the potential to explore and deepen characters in unique ways. Teenage Mutant Ninja Turtles/Ghostbusters II writers Erik Burnham and Tom Waltz take advantage of this opportunity by splitting their two teams up into unique pairings, each with the potential to draw something new out of their characters.

What I like about these pairings is that almost none of them take the obvious route. Instead of pairing up the two “leaders” or main characters, Leonardo is partnered with Winston, who matches his intensity, dedication, and combat skill. Raphael is matched with his polar opposite, Ray; the creative team gets a lot of mileage out of their mismatched styles of conflict resolution, but interestingly, neither appears to totally be in the right, each having much they could teach the other. Venkman’s easygoing and perceptive, yet blunt persona allows him to easily pick up on the woes weighing down Mikey and offer him advice in a way he can easily accept. All three are unusual pairings, and the creative team gets a lot of mileage out of all three.

The most traditional of the pairings is Donatello and Spengler, the two scientists. Even here, though, the creative team finds a unique angle from which to approach the two — not their shared technological prowess, but their shared brushes with death.

These kind of interactions highlight what Teenage Mutant Ninja Turtles/Ghostbusters II does best: it brings together two franchises in unique and unexpected, yet totally natural ways that respect their history as major tentpole franchises and the specific history behind IDW’s runs on both properties. This crossover isn’t just fun fluff; what happens here matters to the characters and the world IDW’s built for them. What could be more exciting?