Superman 35 is the third chapter of the “Imperius Lex” arc, where Lex Luthor is trying to rescind his status as Lord of Apokolips. The Kent family has been separated across Apokolips, each dealing with the best of what Darkseid’s planet has to offer. It’s hard not to think of the last time Pete Tomasi and Patrick Gleason sent us to Apokolips in the pages of Batman and Robin. Unfortunately, this is light years away from that bombastic Bat-tale.

It’s disorienting for the Kents to be plunged into the middle of the Apokoliptian battle for the throne, but it’s equally disorienting as a reader. Events are being rushed from one set piece to another and we never really get a feel for what we’re supposed to feel here.

Kalibak yanks Superman and Lex out of the sky and immediately decides to launch them into the fiery core of Apokolips because he thinks that’s where the “deceased” Darkseid is hiding? I don’t necessarily have a problem with Kalibak’s hair-brained scheme, but there are too many story threads occurring simultaneously without much development.

On the bright side we do get to see Jon rescue some Apokolyptian Dogs of War, because if anyone’s gonna befriend those hounds it’s gonna be Krypto’s pal Jon.

We also learn that the smell of a giant dog cooking on a spit is…appealing?

Travis Moore, Stephen Segovia and Art Thibert carve up the Superman 35‘s art with very differing art styles, adding to the whiplash effect of the book. Though I will give them credit for providing me the homo-erotic image of Lex Luthor riding Superman like a cowboy. 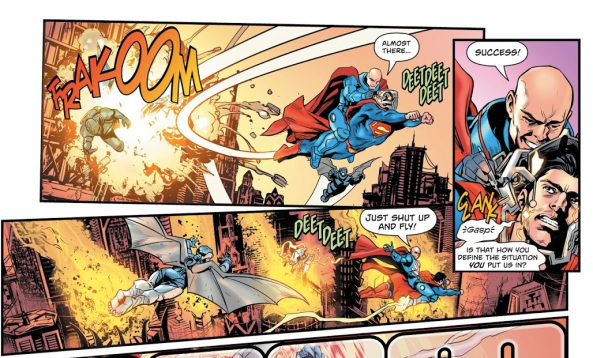