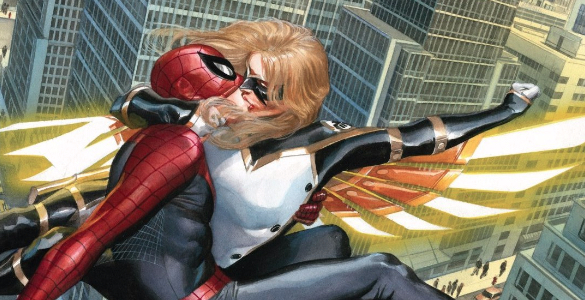 “With great power must also come great responsibility.” Every Spider-Man fan knows these words as well as Peter Parker himself, so you’d think we’d have a good handle on what it means. And we do, to some degree — Peter’s superhuman powers demand that he take on superhuman responsibilities — but much of the tension comes from how all that superheroing clashes with the other responsibilities in his life. Writer Dan Slott has always kept that aspect of Spider-Man in mind, giving Peter more personal and professional responsibilities than he can really keep track of. It’s a juggling act we’re all familiar with in our own lives, and Amazing Spider-Man 791 finds Slott adding one more that clearly means a lot to him: publishing deadlines.

There’s the faintest whiff of a wink as Peter marvels at the “what do you have for next week?” attitude of his boss — the work is never done at a periodical — but for the most part, these new responsibilities blend right in to classic Spider-Man-isms. He’s narrowly making it to work on time, he’s fielding a phone call with Aunt May in the middle of a big fight, and he’s using his Daily Bugle legwork to tip him off to criminal activity (and then turning his actions as Spider-Man back into work for the Daily Bugle).

This kind of return to platonic form feels like a win for Peter, but there’s maybe some problems brewing beneath the surface. Peter’s reaction to carrying an Alchemax phone early in the issue suggests that he won’t respond particularly well to the news that Harry is now working for Alchemax, and his obliviousness to what’s going on in Bobby’s life continues to play out in the background. But the biggest elephant in the room seems to be Pete’s aversion to his own identity. 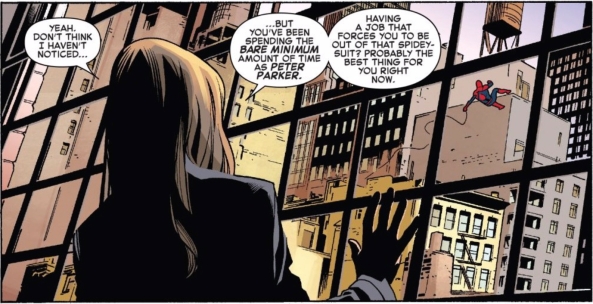 Artist Stuart Immonen is on fire throughout, as usual, but this has to be my favorite panel — look how perfectly it capture’s Bobbi’s sentiment. Pete looks as free as ever as Spider-Man, but he’s framed in these kind of oppressive window-panes, looking for all the world like prison bars. He may feel freer as Spider-Man, but we can see clearly — from Bobbi’s perspective, no less — that he’s boxed in. That’s just good storytelling.

All of which makes this an incredible time to be a Spider-Man fan. We’ve got crackerjack writing, incredibly nuanced art, and a new lease on some classic Spider-Man situations. We know this will all go wrong for Peter sooner rather than later, but I’m going to enjoy every moment of the ride in the meantime.