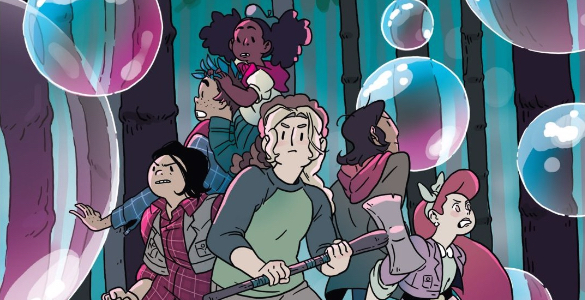 Lumberjanes is ostensibly a comic geared towards a younger audience. The young protagonists, the summer camp setting, and the the fantasy elements all suggest a title that is purposely trying to engage young comic readers. There’s nothing wrong with that and in fact it’s vitally important to foster a love of comics in young people by making titles expressly for their consumption. However, as with all art, Lumberjanes frequently isn’t heralded as much a titles written for older audiences. But as issue 44 shows, there’s no reason why that should be the case.

As Molly and the rest of the Roanokes battle the mysterious time bubbles plaguing their camp, Rosie find herself aging and turning into some sort of beast. A battle ensues for both parties with action being doubled down upon, a rarity for this series. Artist Ayme Sotuyo wonderfully captures this chaos in the way she lays out pages for this issue.  This skill can be seen on several pages, but is best exemplified when Molly confronts the creature causing the time distortions in her camp.

What makes this page so effective is that it cuts between scenes without any preamble. In the first panel, Molly’s conflict is presented, and then the page cuts to three panels involving the fight with Rosie before cutting back to Molly again. It’s an abrupt change, but it adds to the kinetic action of these scenes. It ramps up the pace of the issue and reminds me that Molly isn’t only fighting for herself, but for every other camper and staffer as well.

It’s easy to overlook technical flourishes like this in Lumberjanes because it’s thought of as a kids title. However, scenes like the one above show that, just like the Lumberjanes themselves, this book has more to offer than its outer trappings would suggest.