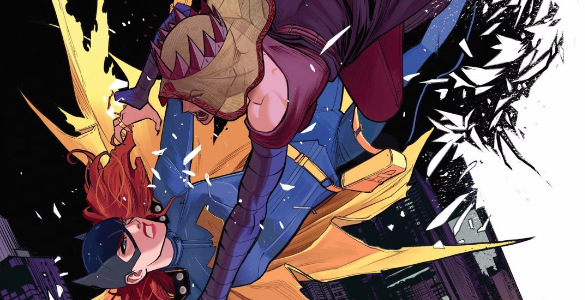 Teens are bad at perspective. It’s not their fault — adolescent brain development sticks them with overdeveloped emotional centers and underdeveloped reasoning centers — but it’s a big part of the reason they aren’t considered “adults.” Fortunately, the stakes for teens is often relatively low. Sure, who takes who to prom may feel like a big deal at the time, but maturity (and time and distance) reveal many teenage concerns to be the trivialities they always were. For that reason, it can be enlightening to revisit your biggest teenage regrets with a more worldly perspective — perhaps they’re not as regrettable as you remember. With Batgirl 17, Hope Larson and Chris Wildgoose seem to take that notion to heart, with a villain vainly asserting the opposite.

It turns out, the great sin that Babs and Dick are being punished for is failing to save Ainsley from herself all those years ago. Only, they did save her — as much as any teenaged casual acquaintances could be expected to. They got her help, and left it to her family and the authorities to make sure she stayed on the wagon. She didn’t die under the watchful eye of Batgirl and Robin, or even within a thousand miles of the city they’ve sworn to protect. They might think of their role in her life with some pangs of guilt — the way any of us might if a friend or acquaintance died in such a way — but must ultimately come to the conclusion that it wasn’t their fault.

And that’s precisely the drama that plays out in this issue. Edith is the manifestation of that guilt, attempting to consume both Dick and Babs. She makes a bit more progress with Dick, but Barbara is ultimately able to save him with a healthy dose of her own memories. 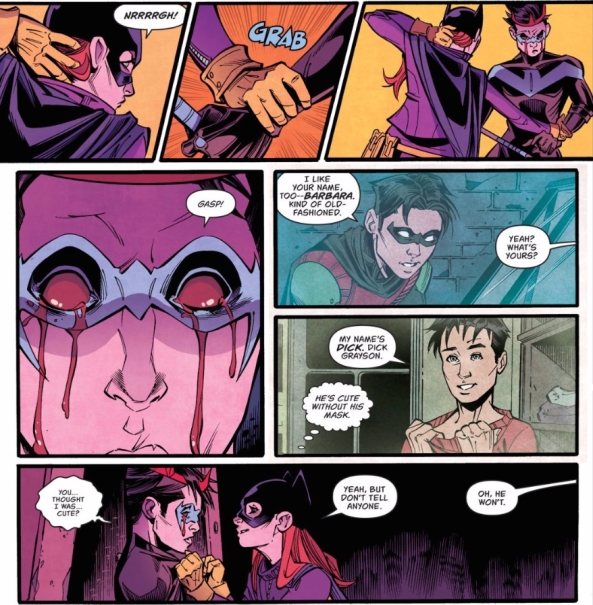 Dick is only able to overcome that metaphorical guilt with the help of a literally different perspective on those memories. It’s a clever way to dramatize a specific facet of coming of age, forcing these characters to reevaluate their actions back when they were teens. It’s exactly the kind of early-twenties narrative (I’d call it “young adult” if that didn’t already mean something else) that got me into Batgirl in the first place. Which is to say, this is exactly the kind of story I want for Batgirl, and this creative team carried it off beautifully.