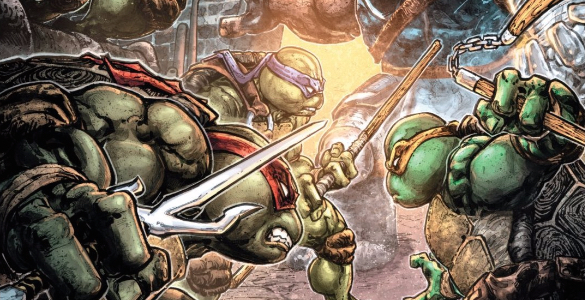 In the main TMNT series, the newly freed Triceratons have returned to Earth after millennia of servitude to the Utrom Empire. For a hulking army of dinosaur-men, they make first contact in a surprisingly sensitive way. Their ultimate aim may be to re-claim the planet, and they go in bearing axes and laser blasters, but they make an attempt as peaceful, civil discourse first. Where does that come from? If you tried to string together the most monstrous series of adjectives possible, you’d end up hitting some prime Triceraton descriptors: cloned, warrior, prehistoric, dinosaur. In Teenage Mutant Ninja Turtles Universe 16 writer Chris Mowry and Giannis Milonogiannis find the humanity within these beasts reveling in the mystery of their origins.

Milonogiannis has some experience making sense of TMNT‘s heavies, as he worked extensively with Bebop and Rocksteady in 2016’s Bebop and Rocksteady Destroy Everything. As the title indicates, that series was mostly about the boundless destructive power those two ogres possessed. Mowry tempers Milonogiannis’ chaotic tendencies with a measured — if ultimately disorienting — look at the life of General Zog. The issue opens amid the launching of a great Triceraton Warship; hundreds of Utroms have turned out to see the warriors off. It’s a scene of celebration, and even though the physiology of the Triceratons makes it difficult to tell who individual characters are to each other, the scene is clear enough without troubling itself to be too obvious. We don’t know it at the point we’re reading it, but a mystery is brewing. The ship takes off and explodes almost the minute it achieves orbit. We later learn that General Zog, the child denied access to the ship, was the lone Triceraton survivor of that incident.

None of that is made clear in the moment. Or even in the immediate aftermath: a pair of Utroms lead a child away from the wreckage, but then… something happens. We skip forward in time to adult Zog? A trick of perspective makes him tower over his escorts? The consistent red coloring of the sky in panel three implies a continuity of time and space, but his size, and the growing craggy detail on his face implies the passage of time. 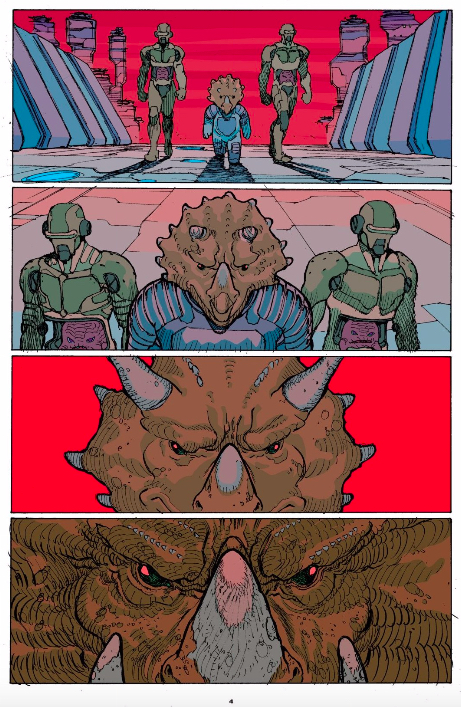 Those first four pages offer no copy to explain what we’re witnessing, so we’re left to feebly piece together the events and identity of the characters on our own. As the issue progresses, we get drips and drabs of additional information about that day, including a hint that Zog’s parents were aboard that ship. The implication, of course, is that prior to their death, Triceratons had been building lives with each other that allowed for reproduction and raising a child. There are hints of an affectionate relationship between Zog and his Sergeant, but outside of a brief hand-hold, their feelings for each other are actively muted. I love that the lack of gender specifiers (and the fact that they’re both serving as warriors) gives their relationship a queer quality without staking anything explicitly. Again, we have to draw our own conclusions.