By Spencer Irwin and Michael DeLaney 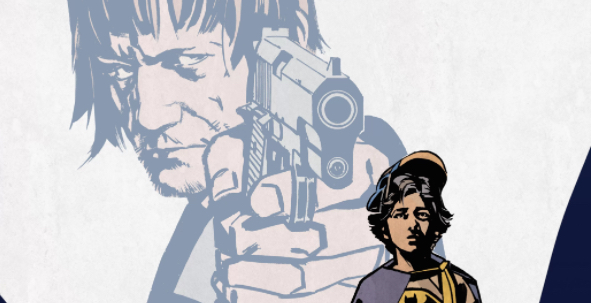 Spencer: When I was a kid, if you’d asked me what I wanted to be when I grew up, I’d have answered “Batman.” Growing up on the Adam West series, I didn’t recognize the tragedy that fuels the character — I only saw the potential for adventure. As someone who was bullied a lot as a kid, I think I was especially attracted to the justice of Batman, the idea that the good guys always won and that the villains always got what was coming to them. For many — both children and adults — comics can serve as an oasis or an escape, but at times they also just serve to highlight, to painfully drive home how unfair the real world actually is. That juxtaposition lies at the heart of Batman: Creature of the Night.

Bruce doesn’t suddenly devote himself to ridding Boston of crime, but his experiences with comic books have led him to believe that there will be some sort of justice. Instead, though, his parents’ case lies completely cold for a year. Unlike his comic book counterpart, this Bruce doesn’t have the comfort of an Alfred, instead having to go live at a boy’s boarding school. Bruce’s beloved “Uncle Alfred” — real name Alton Frederick Jepson — would have loved to have taken him in, but says that he was “unable” to. It’s implied several times throughout the issue that this is because Alton is gay (he mentions being single and his “lifestyle” as reasons for not being allowed to raise Bruce, he mentions his home in Bay Village — a historic gay district in Boston — as being a place he wouldn’t take Bruce). This is an injustice in-and-of itself, but Bruce is too young to see it that way. He just thinks Alton has abandoned him. 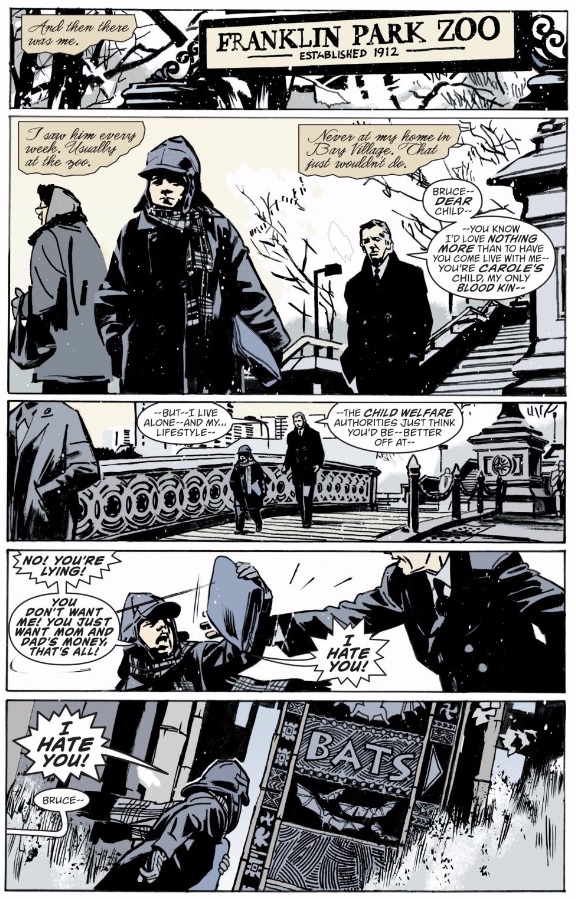 Bruce and Alton both provide narration for the issue — both seemingly as part of their journals — and those dual perspectives are essential. Alton provides a mostly factual account that’s vital for understanding the narrative, but clearly doesn’t fully understand what’s going on in Bruce’s head. Bruce doesn’t understand everything that’s happened to him, but his narration allows readers to see the ways it’s affected him emotionally, and the ways he’s been forced to hide what he’s going through from everyone around him. He feels isolated and without a home, let down by everyone who’s supposed to care for him. Who else does he have but Batman?

Bruce is smart enough to know that Batman isn’t real, but in a world this unfair, he can’t help but to wish he was anyway.

Both in-universe and out, Batman has always been a form of childish wish fulfillment — only an eight-year-old boy could think that he alone could bring an end to crime. Although Creature of the Night‘s Bruce manages to get in some of the same globetrotting training as his comic-counterpart, he’s never going to be able to mold himself into Batman. That doesn’t stop him from having the same desire as Bruce Wayne, though — a desire to make the world a better place, to stop others from having to face the same evil’s he’s faced, and to find justice for his parents. Bruce Wainwright can’t become Batman, so he does the next best thing: he creates one of his own. 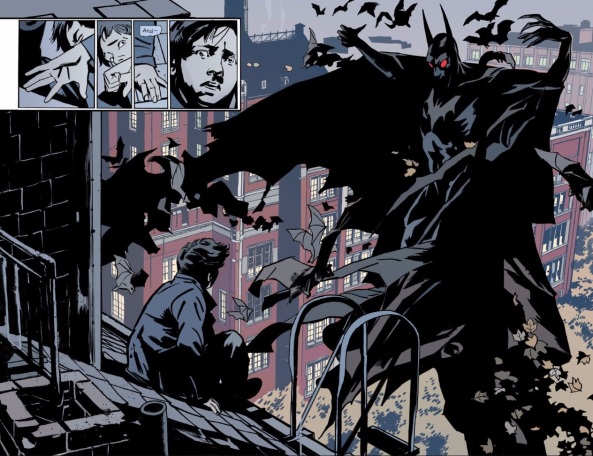 Leon’s art slowly shifts throughout the issue leading up to this point, starting as something bright and period appropriate (his backgrounds remind me of 101 Dalmations) and slowly leaning into David Mazzucchelli-esque noir elements before giving over entirely to the darkness in this spread. Bruce’s Batman is a rogue supernatural element — we don’t know how and why it exists, other than as an answer to Bruce’s prayers. If Batman makes the world a fairer place, then Bruce somehow had to make a Batman of his own in order to get his life back on track.

Unlike Bruce’s, Alton’s narration seems to be written after the end of the story, and implies that Bruce’s creation leads to a tragic end. For the moment, Batman has only done good — bringing down entire gangs and finally bringing the Wainwrights’ killers to justice — but he’s also being controlled (to some extent) by a nine-year-old boy with a morality based off comic books. The difference between our world and Batman’s has already been the primary source of conflict in this story, and I have a feeling it’s only going to get worse as the series continues — a “fair” world might not look the same to a child as it would to an adult. I’m eager to see where these differences in perspective lead.

How about you, Michael? Do you think Bruce’s story can possibly lead anywhere good? What do you think this series has to say so far about our own relationships with Batman as a character and an institution?

Michael: Spencer, I’m not sure what I expected coming into Batman: Creature of the Night 1. Judging by its page count I had assumed that it was an extra-sized one-shot, but the lack of firm conclusion and preview for issue 2’s “Boy Wonder” chapter clearly said otherwise. To answer Spencer’s question, it doesn’t seem like the tale that Kurt Busiek and John Paul Leon are telling us is heading in a pleasant direction. Alton’s narration ends Batman: Creature of the Night 1 on an ominous note, but then again it kind of begins the same way. 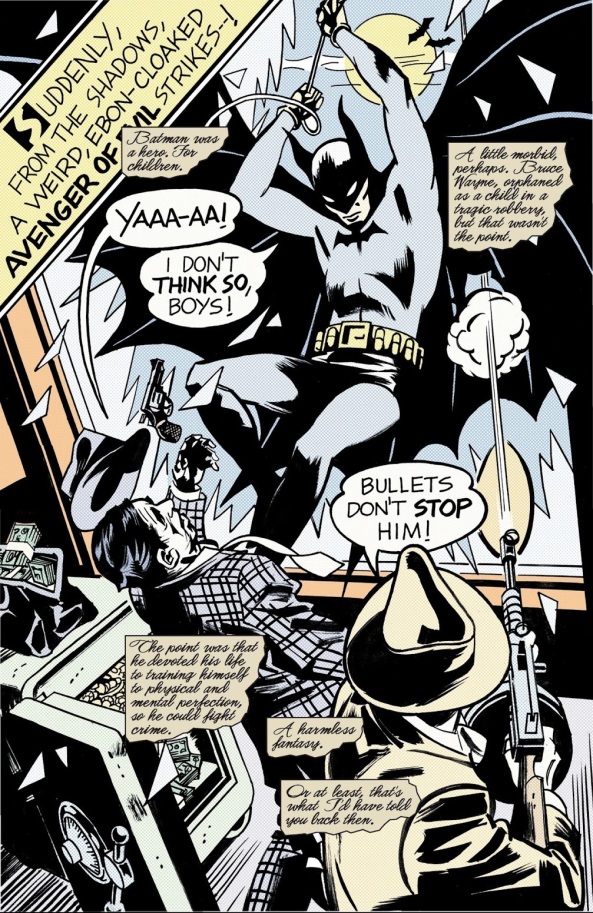 “A harmless fantasy. Or at least, that’s what I’d have told you back then.” Busiek is setting us up for tragedy from the very beginning of this story. After the Wainwrights get murdered within the first few pages, you might think that this was the tragedy in question: a little boy losing his parents and his obsession with Batman in the face of coping with his parents’ death. In hindsight it seems like the tragedy that Alton alludes to is yet to come; likely caused by Bruce’s terrifying bat creature.

There’s a nature/nurture factor to a lot of superhero tales: did personal tragedy forge them into the hero they become or were they wired to be that way all along? By establishing Bruce Wainwright’s story in a world where Batman is a comic book hero, we assume that he is in “our world.” Once it becomes clear that Bruce’s bat creature is not just a figment of his dreams, but is in fact sweeping the streets for justice, we realize that this is not our world at all. Does Bruce create his bat creature out of necessity or was it there all along? I get the sense that there is a larger plan at work to make Bruce Wainwright a Batman figure, but we’ll just have to wait and see on that part.

What is clear is that the bat creature doesn’t appear in some form or another until Bruce gets shot. As he’s coming out of his coma he hears the doctors’ voices, but before that there is another voice telling Bruce his is “SAFE.” Letterer Todd Klein provides this disembodied speech balloons that scratches its way out of the ether — one we will later discover is the voice of the bat creature. The creature’s speech balloons stay disembodied throughout, as it doesn’t actually seem like it has a mouth to speak from. Is Bruce the creature? Is it merely his proxy protector? 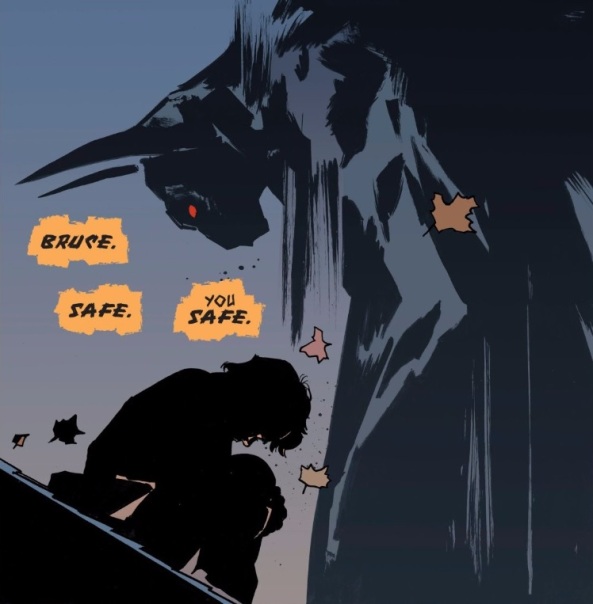 Depending on which iteration we’re talking about, Bruce Wainwright gets something that Bruce Wayne (typically) never gets: justice for his parents’ murders. Not only that, but Bruce Wainwright solves the mystery himself — something 8-year-old Bruce Wayne could only dream of. Of the many iterations of Batman’s origin, Batman: Creature of the Night’s is similar to Tim Burton’s Batman with a little bit of Batman Begins sprinkled in. It’s Batman Begins because the killer gets caught and prosecuted, Batman because both Jack Napier and Donald Bradagh both deliver a chilling, memorable line to the Bruces after killing their parents. 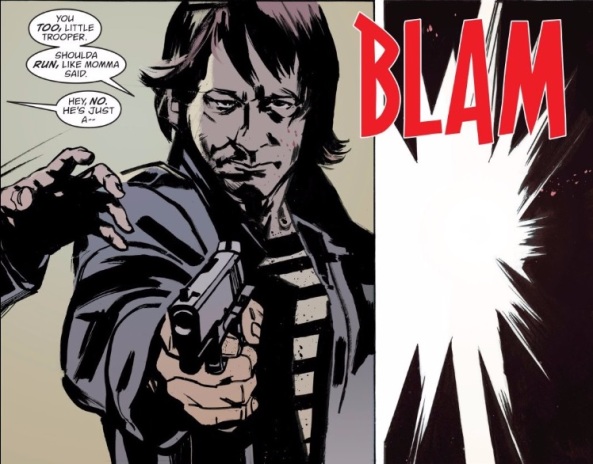 Again, the way that Bruce Wainwright’s Batman-based version of criminal justice bleeds into his “reality” is very curious. Bruce holds on to that “Little Trooper” line and because of Bradagh’s acting roots, turns it into “trouper.” This kind of crime-solving wordplay is just the way that Batman would solve one of the Riddler’s puzzles, especially on Batman ‘66. I don’t want to say that the events of this book are all in Bruce’s head because they’re not — as evidenced by Alton’s narration — but there is this dreamlike wish-fulfillment quality to Bruce’s reality, as if he has a greater influence on it than just willing a demonic bat creature to life.

The success of the story of Batman: Creature of the Night 1 is probably due to the fact that most of its readers find it so relatable. I’d say that the majority of Retcon Punch’s writers and readers have a very personal relationship with Batman, as Spencer mentioned. This can be applied to any pop culture icon but really, Batman is the most popular superhero, period. Everyone has their favorite version of Batman, their favorite Batman movie, their favorite Batman writer etc. I don’t think I could even begin to count how many times I’ve laid out the criticism “But Batman wouldn’t do that!” Bruce Wainwright’s relationship with Batman is so personal that his subconscious blends the memory of his parents with the comic book images of the Waynes.

Our relationship with our heroes and stories ultimately is a piece of our larger worldview. What’s interesting is that the Batman that Bruce Wainwright creates is a dark avenger, when in 1968 he’d be mostly reading and watching campier tales of the Caped Crusader. Then again, his parents are dead and he feels that his uncle has abandoned him, so maybe it’s not all that surprising that he crafts this creature that serves as protector and guardian that just wants him to be “SAFE.”

I’m interested to see where Busiek and Leon take Batman: Creature of the Night, especially since it’s clearly headed for another tragedy. I’m hoping that “Boy Wonder” explores some of the pitfalls of our hero worship and idolization. And that Alton finds a nice man to settle down with, of course.

8 comments on “Batman: Creature of the Night 1: Discussion”