A couple months ago, my wife and I fulfilled our destiny as newlyweds and took one step closer to actual adulthood by buying a dog. She’s an unholy mix between a labrador retriever and a dachshund, and perhaps the cutest dog on the planet. Even when she chews up favorite bookmarks I’ve had for years or drinks water so compulsively fast that she barfs it all back up one minute later forcing me to clean it up, I can’t help but love her. I blame the eyes. One sad puppy-dog look from her an all is forgiven. This is all to say I understand why people love dogs and why they seemingly go to the ends of the earth for them. As it turns out, that’s something I have in common with Stephen Strange, as well.

At the end of Doctor Strange 381, it was revealed that Stephen had abandoned magic and taken up veterinary medicine. Stephen handles this job with the same candor that he handles all things, which is to say: he doesn’t handle it well. Perhaps his biggest mistake — that’s actually amazing — is allowing a basset hound, Bats, the ability to talk. It lands Stephen in trouble, yet at the same time Bats is incredibly likable. Maybe it’s his sad basset hound eyes, or maybe it’s his brash attitude (OR MAYBE IT’S BECAUSE HE’S A LOVABLE DOG), but Bats is instantly the best part of this issue. And that is, perhaps, why it’s so sad when he dies at the end of it.

When Stephen confronts Loki (because he’s worried the latter will locate a spell that will give him awesome magical powers), Bats comes along to help. This courageous K-9 leaps to Stephen’s defense when he is manhandled by Loki, but his poor, little, unhealthy dog heart can’t take the excitement and he quickly expires. 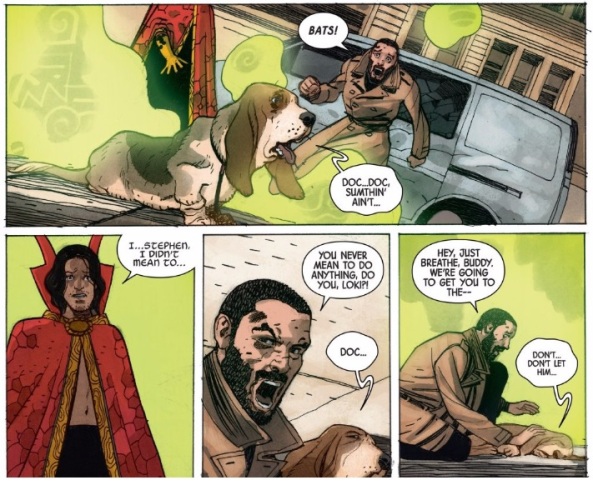 Oh, dear Bats, we hardly knew ye, but this doesn’t lessen the blow of seeing you die. Now that I own a dog, I understand why Stephen is so upset at Bats’s death. Dogs are awful and wonderful and more often than not awfully wonderful, so it’s upsetting to see them die in real or even on the page of a comic book. Like most horrible, dog-loving people, I would rather see 1,000 humans die before a single dog so it’s clear to see why this event leads Stephen to take extreme measures.