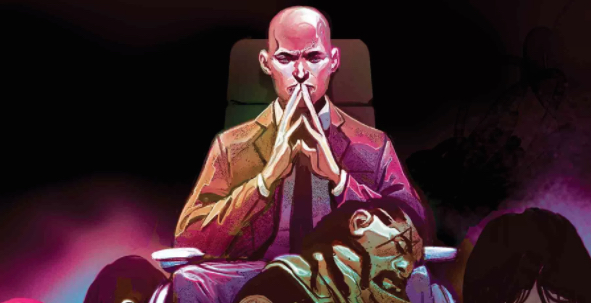 Patrick: Over the weekend, a friend who had fallen out of comics asked me how the Iron Man comics were these days. He was last reading like four years ago, when Kieron Gillen was writing about the secret origin of Tony Stark. Between the Tony Stark A.I., Riri Williams, and a reformed Doctor Doom, I realized it was almost impossible to walk him through all of it in any meaningful way. I mean, just explaining how / why Doom could be a good guy requires briefing him on all of Jonathan Hickman’s Avengers and Secret Wars run. And in summary, it all sounds nuts — like the ramblings of a lunatic — but the moment-to-moment fireworks display that brought us to that point was exciting, compelling, and fun. That’s exactly what we get in Astonishing X-Men, a technicolor extravaganza content to sell the spectacle of the moment over the logic of the scene. But, man: what a spectacle it is!

This is in no small part due to Mike del Mundo and Marco D’Alfonso inimitable artwork. The action of the issue skips back and forth between the Shadow King’s dimension and a world constantly lit by glowing cards, psychic bonds, and super-spy monitors. Del Mundo and D’Alfonso lean into the overwhelming quality of these lights, letting the crackling energy of Xavier telekinetically flexing his way out of his chains dominate a page already pulsing with classic, trippy X-Men action. Check out the way this streak of white slices through the bottom of of this two-page spread.

Del Mundo and D’Alfonso always play in vibrant blues, reds and greens, leaving the browns and blacks to less imaginative comics. That luminescent white starts to take on the role that black outlines or shading would take for most arts, especially in those last three panels. This could come to signify good triumphing over, but under writer Charles Soule’s pen, it takes on an even more specific meaning. White is a void: a perceived emptiness on the comic page. Fantomex is, per Xavier’s narration, a “man of illusions…fluidity itself,” but he is also an almost entirely white character. Within the abstraction that in the Shadow Dimension, Rogue and Mystique are brightly colored warriors, but Fantomex retains his ivory finish. There’s a clear visual line drawn from Xavier’s power (and energy in general) and Fantomex. So, it should be no surprise that Xavier’s escape is tied directly to this character. That last image blows out the lighting on the newly christened “X,” insisting on the intense brightness of the panel.

So, like, I should have seen this big finish coming, but I was too dazzled by the pretty colors and bright lights to see it in the moment. I may not be able to tell you why or how this resolution came about, the colors were always driving to this ending.