By Michael DeLaney and Taylor Anderson 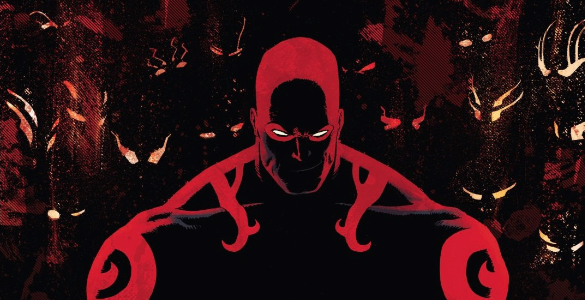 Michael: There are a couple of ways to react when you’ve been caught in a lie. The most obvious option is to come clean and tell the 100% truth. The other, more likely way is to tell some of the truth but mitigate it with another smaller lie. This essentially comes down to self-preservation: you’ve been caught for one thing but not necessarily everything. It’s all about saving face, a truth that even applies to fictional space police.

The recent arc of Guardians of the Galaxy could be described as to “liars lying to sniff out other liars.” In Guardians of the Galaxy 148, the Guardians continue their undercover work with the Nova Corps to root out Shi’Ar spies. It’s getting difficult for the respective Guardians to maintain their covers and remember who’s in on their secret. Meanwhile some of the team starts to keep secrets from one another.

It’s not surprising that one of the most successful undercover Guardians is Rocket Raccoon. While he hasn’t uncovered any Shi’Ar spies, his handiness as a thief has led him to sniff out some fellow brothers in theft. Rocket almost gives his identity away to one of his superiors but it stays masked by his attitude and his results.

Star-Lord is crafting lies within lies as he and Rich Rider decide how to best handle their discovery of a gigantic Infinity Stone. Nova Corpsman Scott Adsit hired the Guardians to root out the spies within their organization, but that very mission causes Peter Quill not to disclose his discovery — no one is to be trusted. When he reunites with his team, Quill berates Gamora for not telling him that assumed-dead Rich Rider was alive. Almost within the very same hypocritical breath however he decides to withhold the information about the Infinity Stone from her.

This isn’t the only instance where Gerry Duggan and Marcus To imply that Quill’s deception might not be so different from the spies they’re trying to hunt down. Quill crafts a story where Nova Corpsman Eve was “one of the bad ones” and that instead of finding the giant Infinity Stone they found nothing but graves.

Likewise Nova Corpsman Xian and his crew have fashioned a similar lie that Thanos escaped their custody, later mitigating that lie with another story that they “threw him into a black hole.” The only reason that Drax closes the books on these particular spies is through a convenient bit of telepathic ex-machina. 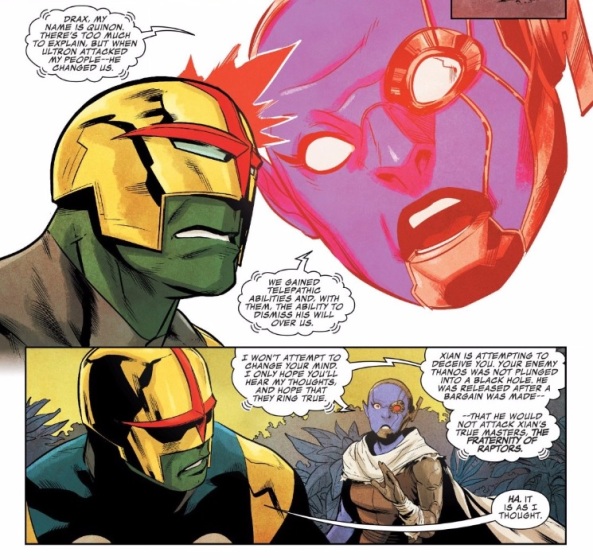 A bulk of Guardians of the Galaxy 148 is dedicated to Drax’s investigation of Xian and his men. Though he may not have been able to completely solve the case without that telepathic intervention, it’s clear that Drax and Xian aren’t gonna get along from the minute that his ship lands. Not only does Xian admit that his initial report was bogus but he comes at Drax with a lot of overcompensating bravado, questioning Drax’s credentials and competency. Also, it’s a pretty clear sign that you’re dealing with bad guys when they’re all gung-ho about mowing down a family of alien refugees — Ultron or not.

I believe this is the first issue that brings some of the bite back to the pacifist Drax. He first flexes his muscles when Xian threatens to kill the Ultron family, then lays a true smack down when he discovers Xian’s guilt. In order to cool his murderous tendencies down, Drax engages in a little bit of Springsteen saxophone meditation, because Drax is a unique creature.

Taylor, what did you think of this issue? I found it to be a step up from the last one, it’s good to see some progression in this Nova Corps arc. Do you think we’re finally gonna see a showdown with all of those evil Groots? Is Rocket eventually gonna lead the Nova Corps? Will Cosmo the space dog get his own title?

Taylor: Oh man, I think Cosmo is totally worthy of his own title. I mean, how many times can a heroic space dog save the day and not be granted his own story? Perhaps that’s a bit of an overreaction, but it’s hard not to get excited by Cosmo’s appearance when he has an entrance like this. 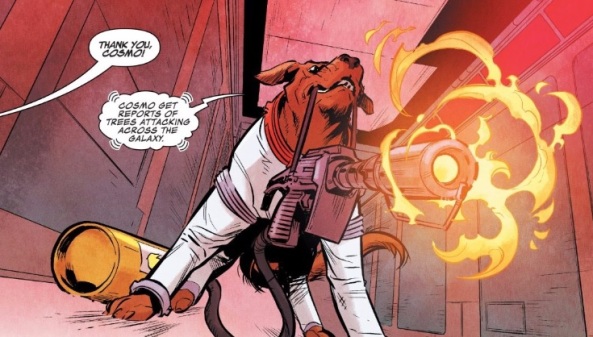 While I question how Cosmo dragged this flame thrower down the hallway with no arms and also how he pulled the trigger without any opposable thumbs, there’s no doubt this panel makes an impression. A lot of that has to go down to Marcus To’s artwork. To understand that heroes aren’t just defined by their actions, but also how they are drawn on the page. The way he sets the camera extra low in this panel gives the false perspective that Cosmo towers over evil. Being a dog, this obviously isn’t the case but that’s not the point. What is the point is that Cosmo has saved the day here and To uses camera angels to make Cosmo look as heroic as his actions.

To is also good at doing this earlier in the issue with Drax, though in this case no forced perspective is needed to impress upon us that the Destroyer is large in heroic stature. Drax literally towers over the corrupt Nova corpsmen, so To uses other visual clues to show that Drax is heroic while his foes are despicable. 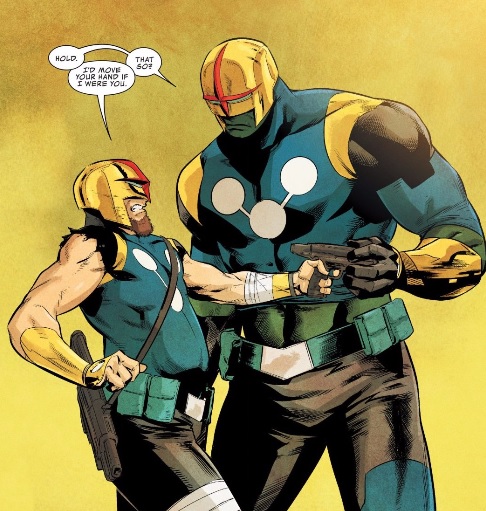 Xian is tiny in comparison to Drax but he also has a pot belly and trashy cut-off sleeves. Compared to the super sculpted and neatly attired Drax, it’s clear — even without any context — who the good guy and bad guy are in this panel. To is also able to interject a bit of humor into the panel as well. Drax’s uniform is clearly too small for him, revealing his midriff and not completely covering his arms. So even though the Nova Corps uniform suits him, it doesn’t mean mean we all can’t get a laugh about how hard it is to cloth a giant green man.

Somewhere, the Hulk nods in agreement.

As to your question about the the evil Groots, Michael, I can only assume that that issue will be addressed by Cosmo and the guardians soon enough. Despite all the lies flying around in this issue, it’s clear that the Guardians are quite effective in cleaning up the Nova Corps. This being the case, it seems likely that they could lead a freshened up Nova Corps in some sort of climatic battle against the evil Groots with the help of Cosmo. To do that, though, the Guardians will have to put aside their own individual agendas for a little while to address bigger problems. That seems easy enough, but Star Lord et al. have a way of making things more complicated than they need to be. Whether that happens in the next issue and beyond, we’ll just have to wait and see.

2 comments on “Guardians of the Galaxy 148: Discussion”