Spencer: One of the most common complaints about prequels is that everyone “already knows the ending,” but sometimes that inevitability can be an asset. Take The Wicked + The Divine Christmas Annual 1, for example. Writer Kieron Gillen and a bevy of talented guest artists fill the special with tales from the early days of the Pantheon. Most are fairly sweet and upbeat in isolation, but when viewed in context with the events that follow, suddenly become much more bittersweet. The inevitable history these characters must someday face creates extra layers of meaning for each story, making the special as a whole that much richer.

This is most obvious with the characters who go on to meet tragic fates. Just seeing Luci, Tara, Inanna, or Dionysus on the page again adds a tint of sorrow to even the most joyful tale, but then Gillen goes on to twist the knife even further. 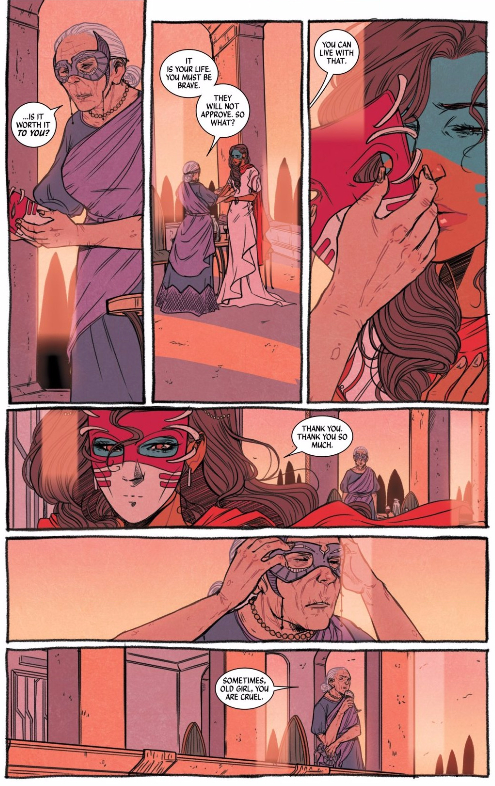 The Emma Vieceli-illustrated “Decomposition” finds Tara torn about what direction to take her career. Ananke’s advice brings Tara some comfort for the moment, but WicDiv regulars know that Ananke is up to no good before we even reach her final line. “You can live with that” is such a cruel piece of advice because, no, Tara can’t live with a disapproving, hateful public — this decision is the first step towards Tara’s eventual (assisted) suicide, and the kicker is that Ananke had been manipulating Tara and leading her down that path from the very beginning.

Likewise, Gillen and Chynna Clugston Flores’ “Hitched” leans into its protagonists’ most painful moments, all under the facade of a cheerful meet cute. 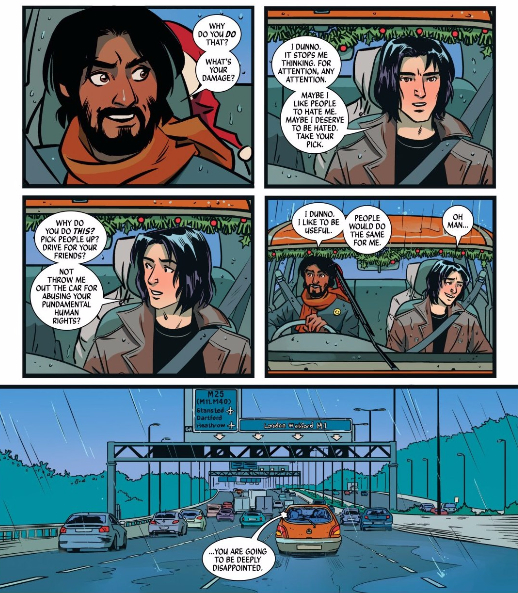 This is the story of how Dionysus and Baphomet — here in their pre-Pantheon forms of Umar and Cameron, respectively — first met and became friends. On one level it’s just a neat little bit of trivia that adds a bit more context to Dio’s actions in a recent issue, but it also lays bare the fatal flaws of both characters. Dio’s selflessness eventually leads to his death, while Baph’s self-loathing eventually renders him effectively impotent, reduced to the Morrigan’s battered lapdog. Both these qualities seem great in the here-and-now — Dio’s generosity is a legitimately wonderful quality, and Baph finds effortless humor in his self-effacing attitude — but because we know where these characters’ paths eventually lead, we can’t help but to see them as far more dangerous than the story may otherwise paint them.

I suppose this really shouldn’t be a surprise, though, as inevitable tragedy is built into WicDiv‘s very DNA in the form of the Pantheon’s two-year lifespan. Gillen and Carla Speed McNeil’s “Toxic Community” touches on this most explicitly via Lucifer’s despair over her friend Hazel’s eventual ascension to Amaterasu. Luci tries to push Hazel away to protect her innocence from the hedonistic lifestyle of a celebrity/god, but it seems just as likely that she’d want to protect Hazel from godhood’s other nasty side-effects as well.

Perhaps the most interesting aspect of this story is the extra shading it adds to Luci as a character. We’ve always known that there was a part of her that truly cared beneath her devilish exterior, but here Gillen paints her behavior as more of a facade than ever before. Turns out Luci never wanted to be a god in the first place, and her devil-may-care attitude (pun absolutely intended) may’ve simply been a coping mechanism to deal with her inevitable tragic fate.

That’s the other great strength of The Wicked + The Divine Christmas Annual — its ability to retroactively flesh out even long-dead characters. The Rachel Stott-illustrated “Stolen Moment” continues the trend, introducing a slight sexual element to Luci and Laura’s friendship that I can’t wait to see addressed again now that Luci(‘s head) is back in play.

The most attention, though, is paid to a character who’s still alive, but has taken on a background role in recent issues: Baal. Throughout “Sumer Loving” (illustrated by Kris Anka and Jen Bartel), “If You’re Feline Sinister” (illustrated by Rachel Stott) and “Uh-Huh-Huh” (illustrated by Emma Vieceli), Gillen peels back Baal’s tough, authoritative exterior to reveal the much more vulnerable, insecure man beneath. The most interesting quality these stories explore, though, may just be Baal’s propensity to view situations in black-and-white. 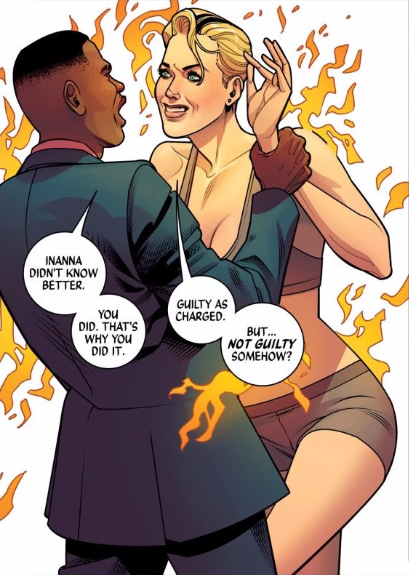 Yeah, Inanna’s a good guy, but he’s not nearly as pure or blameless as Baal’s built him up to be. That’s just how Baal views the world; he’s blind to its more intricate complexities. Inanna is flawless, the Great Darkness is pure evil, Ananke is to be trusted (until she wasn’t, but it took a lot of proof to get Baal there), and Minerva is to be protected above all else. This quality will likely hurt Baal as a leader, especially when it comes to that last situation — with Ananke possessing Minerva somehow, you can bet the old crone will use Baal’s paternal instincts for the girl to her advantage, and Baal will never even see it coming.

That’s another thing that makes Christmas Annual stand out — even as it revisits the past, it finds ways to introduce new ideas and character traits to explore when the series returns, turning what could have been just a frothy, fun one-shot into something that feels relevant and important. I’ve gotta say, Drew, I’m quite happy with the results — how about you? And what’s your read on Hazel’s weird drawing of Luci and Sakhmet’s strangely out-of-character dismissal of Luci as a “bad person?” As much as I liked this issue, those two moments stumped me a bit.

Drew: I’m as lost as you are on that moment with Sakhmet — of all the characters to moralize about anything, let alone sexual exploits, it feels most out of place coming from her. I suppose it’s possible she had more of a conscience back then, or maybe she’s just being a hypocrite, but it’s definitely an odd, out-of-character moment to end that scene with.

But I think I might be able to shed some light on Hazel’s fanart. My reading of Luci’s brusqueness is a tad different from yours. While I definitely believe her “I’m sorry” at the end of the vignette, I’m less certain that she’s motivated by protecting Hazel elsewhere. Indeed, I kind of believe that brusque exterior at face value — Luci is embarrassed by Hazel. Even back when they were both mortals, Eleanor was cynically too-cool for Hazel. She swears in front of her mother (in spite of her mother’s protestations), she is dismissive of Hazel’s gaming skills, and she’s seemingly disinterested in the pantheon. Throw in the cool clothes and sexual anecdotes that seem to accompany godhood, and Luci is Hazel’s childhood friend who got popular. Hazel, meanwhile, is less self aware and decidedly less mature, openly admitting that she was only able to visit Luci because she “whined until mummy brought [her].”

So Hazel’s fanart kind of manifests these differences. Even Eleanor thought she was too cool for it, offering an unenthusiastic “that’s awesome,” when Hazel shares some in August, but that’s much, much worse in October. Luci is now the subject of fanart, not the creator or consumer of it, and Hazel’s obliviousness of this threatens that dynamic.

What’s worse, Hazel’s fanart is more familiar than it is deifying, casting Luci as a buffoon — the kind of thing that is totally okay for two friends who are teasing each other, but far too familiar for the mortal/god relationship. It’s obvious that the two have different opinions of their relationship at that point.

It’s a bit like in Mean Girls, when Lindsay Lohan’s character is cruel to Lizzy Caplan and Daniel Franzese’s characters — she may frame it as “protecting” them, but it’s obvious she actually just likes the attention of being popular, and doesn’t want to lose it when her weirdo friends show up. I feel like it’s a classic coming of age story, one where the “cool” friend often regrets their actions, sometimes after the “uncool” friend goes through a similar transformation, perhaps in order for the two to be friends again. Which might be my read of that “I’m sorry.” Luci wasn’t intentionally protecting Hazel from godhood, but she also didn’t consider how pushing her away might drive her to pursue it.

Sorry to spend so much time on that story, but the the Eleanor/Luci/Hazel/Amaterasu dynamic is one of the most sharply drawn for me in this issue, and the one I probably care about the most. I think it’s fair to say that these stories are largely inessential — nothing here is vital to understanding the actions or motives of these characters in the story proper — which leaves the issue suffering from some of the same problems that plagued the Star Wars prequels: some scenes play out exactly as we always assumed, simply reiterating what we already know about the world, while others make needless connections that make the world feel smaller than it ever did before. There’s still plenty of fun to be had seeing these characters be themselves (especially at a time where they weren’t battling mysterious undying forces), but it’s pretty disposable. What else could you really want from a Christmas Special?