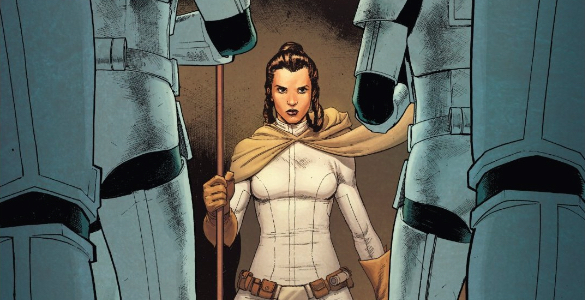 George Lucas has many sins to atone for. Jar-Jar Binks, Episode II, and of course the “special edition” of the original trilogy. Of this last sin, perhaps what makes it the most grievous is that it has taken that which was perfect and smeared crap all over it. While there’s a lot to complain about with the re-releases, nothing gets me more worked up than the added scene in Episode where Han encounters Jabba outside of the Millennium Falcon. The CGI in this scene is just awful and it’s clear that Harrison Ford is not actually talking to a giant slug, but simply an overweight man, as Jabba appeared in the original scene. With such sins as its burden, I though Star Wars would be careful not to repeat anything of that nature. And so it was, until Star Wars issue 40.

Visually, this issue is just kind of mess. There are several action scenes throughout that are hard to follow and unclear. I get the vague sense in the opening battle scene that several things are happening at once, such as Han blowing something up in the Falcon, Luke riding a weird horse thing, and other such stuff. In each of these scenes, artist Salvador Larroca uses an odd combination of silhouettes and close-ups which confuse what going on.

As bewildering as these action scenes are, they aren’t nearly as troubling as Larroca’s use of cell tracing in this issue. We’ve written a lot about this topic at Retcon Punch, both good and bad, but this issue presents something that is more noticeable than anything I’ve seen before. In a scene featuring Luke and Leia debating their next plans, Larroca combines his cell-tracing technique with overlapping layers of his own. 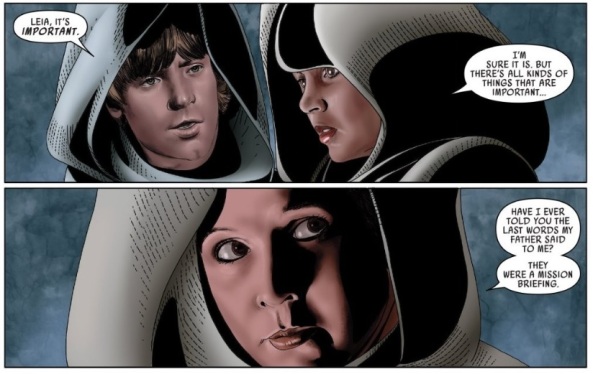 The result is not great. It looks as if Leia and Luke’s faces have been crudely pasted over an already existing frame. Just like in the scene where Han meets Jabba, there appear to be two elements here that don’t exist on the same plane. On the one, you have the robes Luke and Leia are wearing. On the other, you have their faces. The two textures don’t match at all and create a disturbing and frankly sloppy look.