Michael: Leonardo da Vinci is the Renaissance Man: inventor, painter, mathematician, historian — you name it and the man probably had a hand in it. His influence on human ingenuity is vast and varied. In fact, in the Comics realm, da Vinci’s “bat-winged” flying machine ended up being a visual inspiration for comics’ most popular figure: Batman. In Monstro Mechanica, Paul Allor and Chris Evenhuis make da Vinci’s marvelous mind the object of desire among devious forces at work in Florence. And while there is the titular “Monstro Mechanica” in the form of da Vinci’s mechanical man, Allor and Evenhuis cast some doubt on whether or not da Vinci’s marvelous mind makes him hero or villain.

Da Vinci finds himself caught in the middle of a war between The Pope and the Medici family. Both sides wish to use da Vinci’s intellect to craft weapons to defeat the other side. Da Vinci makes it clear that he is no idealist, he doesn’t care who wins this fight — for mining rights, no less. Da Vinci is an inventor, but that doesn’t mean he’s not a capitalist, dammit!

At the end of Monstro Mechanica 1, da Vinci’s apprentice Isabel remarks that her mentor could turn out to be an asset or a threat. That’s not the first indication that da Vinci might not be the hero we expect, however. In the opening pages of the book, he encourages one of his would-be assassins to kill himself. When the man hesitated, da Vinci helps him finish the job.

Da Vinci seems to be more of an egotistical opportunist than a hero. He doesn’t seem to struggle with questions of right or wrong, at least. There is a bit of identity crisis with the books other two leads, however. Isabel refuses to be a “traditional woman” — instead of getting married and bearing children, she wears pants and aids da Vinci in his work. Isabel also has a difficult time reconciling the identity of da Vinci’s automaton.

As a cold and pragmatic creator, da Vinci scolds Isabel whenever she refers to the automaton as “he.” In one of the instances where they have this discussion, da Vinci criticizes Isabel’s life choices and storms off in a tizzy.

Dude is a primadonna for sure.

“He” or not, it’s clear that the machine is taking to Isabel over its creator. After all, it did briefly assault da Vinci after one such “he” vs. “it” debates. The science of how the automaton works is unclear, nor does it really matter. Historically, da Vinci did have sketches and plans to make an “artificial man,” which is what this is based on. What Allor and Evenhuis want to make clear that by not “resetting” the automaton after every “mission,” Isabel is conditioning it to become more human and to trust her. It seems that da Vinci’s hubris might not allow him the insight to realize this betrayal. 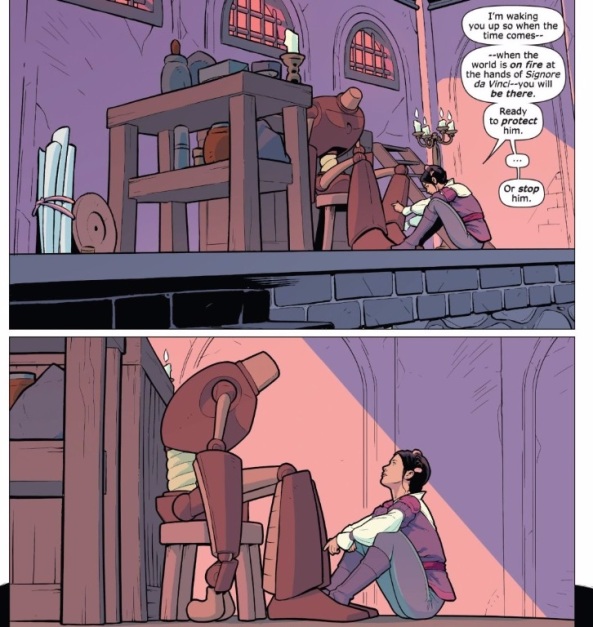 I like the way that Allor and Evenhuis are all portraying da Vinci. He’s not overly pompous and egotistical, but it’s not surprising that a man with such an advanced intellect as he would find his contemporaries to be relative cavemen. He doesn’t find the Medici/Papal State squabble to be particularly interesting, but by the end of the issue it does seem like he’ll gladly profit off of it by selling his weapons to both sides. As the automaton’s creator, da Vinci sees himself above it, making it less than human — having no genitals helps too. Monstro Mechanica 1 reads more like a villainous origin story than a sensationalized account of a historical figure.

Mark what did you think? Did Monstro Mechanica take you by surprise? Do you have any insights on Isabel? It’s kind of suggested that she might be a lesbian — do you think there’s any credibility to that or is it just people’s fears of her being different? And, most importantly, do you get an Iron Giant vibe from the automaton?

Mark: I totally get an Iron Giant vibe from the automaton. Maybe it’s the similar chunkiness of his — er, its — limbs? 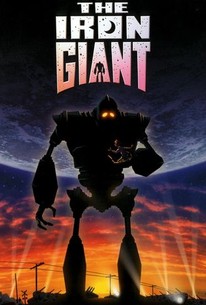 But da Vinci doesn’t read as a villain to me so much as a huge dick. Turning one of the most famed thinkers of the Western world into an arrogant jerk is an interesting starting point for a story, but I never felt sold on any of Monstro Mechanica 1 characterizations.

It’s difficult to have a central character in a story that doesn’t seem to care much about anything. Why is Leonardo da Vinci so laissez-faire about the conflict between the Medici and the Pope? There’s indication that he’s driven by a mercenarial desire for money, but for what ends? At no point does the story indicate that da Vinci wants for anything — he and Isabel seem well fed, clothed, and secure in their positions — but he also doesn’t seem fixated by a Scrooge McDuck lust for lucre. There’s a fundamental lack of stakes here, and the story suffers for it.

Similar problems undermine Isabel as well. Much is made of the fact that Isabel wears pants, but why does she choose to dress that way? Again, the issue provides no context, and, again, the lack of clear stakes renders the drama surrounding her wardrobe inert. Does she identify as a man? Are pants more maneuverable for her work? At the end of the day, does she just like the way they look? We’re never told, and so her visit to the marketplace ends up not adding much.

Granted, a reader’s desire to know more is what sells future issues, but the lack of fundamental information in Monstro Mechanica 1 feels careless rather than mysterious. It’s difficult to be filled with wonder at the thought of a steampunk automaton when you’re just trying to puzzle out how old Isabel is supposed to be.